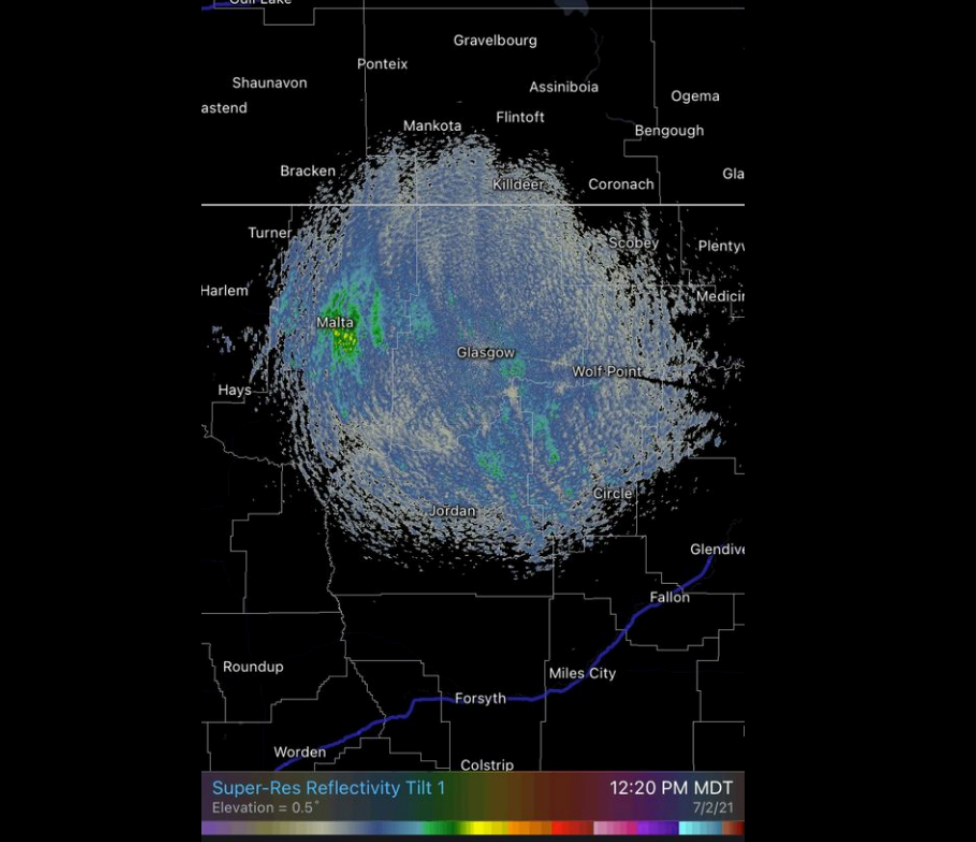 I have written about this before, but this story just got a whole lot stranger.  In previous years, most Americans haven’t been too concerned when giant swarms of insects have devoured crops on the other side of the globe, but now this is actually happening right here in the good old United States of America on a massive scale.  The hot, dry conditions in the western half of the nation have created ideal conditions for grasshoppers to flourish, and millions upon millions of them are now wreaking havoc wherever they go.  In fact, the National Weather Service says that some of the grasshopper swarms are so large that they are showing up on radar…

The National Weather Service (NWS) Glasgow says the radar is lighting up, but not with rain.

Instead, the radar is picking up “countless” grasshoppers in the area according to a post from the NWS.

The grasshoppers are flying as high as 10,000 feet above the ground and are being picked up by the radar the NWS said.

I have never heard of such a thing happening in this nation in my entire lifetime.

According to one news source, some of the grasshopper swarms are so dense “it can appear the earth is moving”…

They’re arriving in swarms so dense it can appear the earth is moving. They’re covering roads and fields, pelting ATV riders, and steadily devouring grains and grass to the bedevilment of farmers and ranchers.

A massive population of grasshoppers is proliferating in the sweltering American west, where a deep drought has made for ideal conditions for grasshopper eggs to hatch and survive into adulthood.

Agricultural production in the western half of the country was already going to be below expectations because of the endless megadrought, and now these grasshoppers are “steadily devouring” fields that farmers have meticulously cultivated.

See also  Is America Becoming The Sex Crime Capital Of The Western World?

Not only that, grasshoppers are also eating much of what our cattle herds were supposed to be eating as well…

Grasshoppers, which thrive in hot, dry weather, have been defoliating trees and competing with cattle for food — and the bugs are winning. Ranchers are selling cattle “due to poor forage conditions and a lack of feed,” according to the latest US drought monitor.

This is not a small problem that we are talking about.

On average, in seven western states “each square yard of land contains at least 15 grasshoppers” according to the U.S. Department of Agriculture…

Around 93% of the West is in some level of drought this week, and a bizarre impact of this pernicious dry condition is the explosion of the grasshopper population. Grasshoppers have devoured so much vegetation that many ranchers fear rangelands could be stripped bare.

A 2021 grasshopper hazard map from the US Department of Agriculture shows each square yard of land contains at least 15 grasshoppers in parts of Oregon, Idaho, Montana, Wyoming, Arizona, Colorado, and Nebraska.

That is nuts.  I knew that this crisis was bad, but I didn’t know that it was this bad.

In the past, I have used the term “voracious” to describe them, and that is precisely what they are.  They are never satisfied, and they are always looking for new fields to ravage.

“I can only describe grasshoppers in expletives,” said Richard Nicholson, a cattle rancher in Fort Klamath, a small community in southern Oregon, who once recalled seeing grasshopper bands eat 1,000 acres a day and cover the ground like snow. The insects cause innumerable headaches for farmers and ranchers, competing with cattle for tough-to-find wild forage and costing tens of thousands of dollars in lost crops and associated costs. “They are a scourge of the Earth … They just destroy the land, destroy the crops. They are just a bad, bad predator.”

Needless to say, this is yet another factor which will have a huge impact on agricultural production this year.

Food prices have already been rising quite aggressively in recent months, and this certainly isn’t going to help matters.

Just when you think that things can’t possibly get any worse in the western half of the country, somehow they do, and many believe that what we have experienced so far is just the beginning.

Scientists are telling us that there is no end in sight for the endless megadrought that is affecting so many western states right now, and that means that the grasshoppers will be with us for the foreseeable future as well.

The summer of 2021 is only a couple of weeks old, but already there have been so many problems.  Hopefully things will start to return to “normal” soon, but personally I have a feeling that a whole lot more chaos is just around the corner.