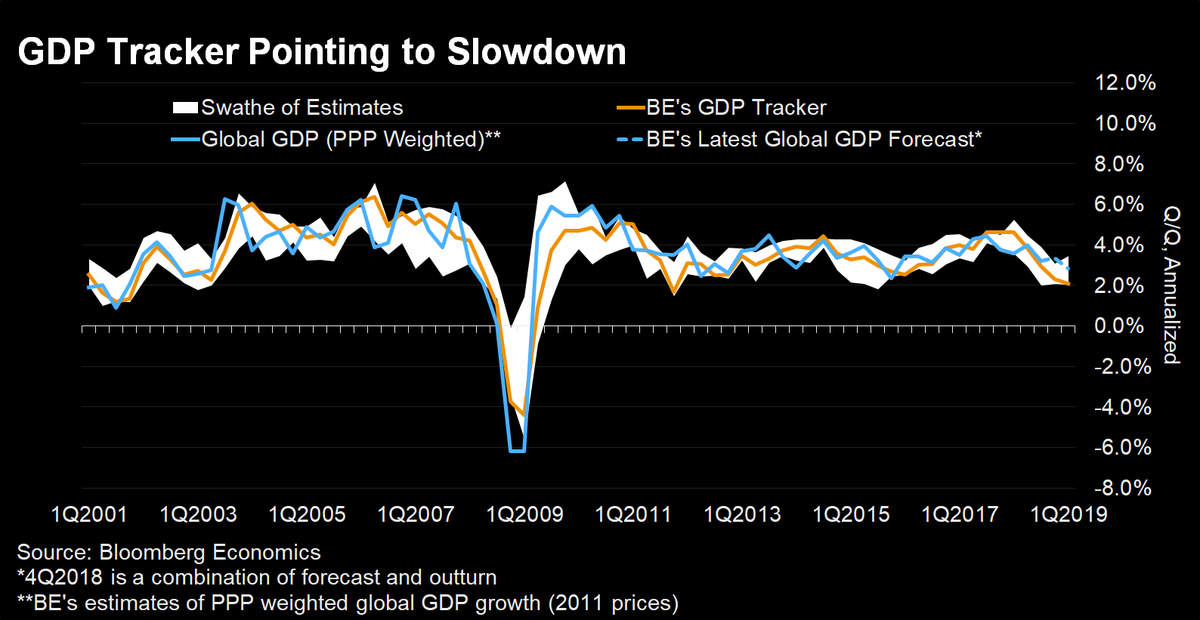 (Bloomberg) — The global economy’s sharp loss of speed through 2018 has left the pace of expansion the weakest since the global financial crisis a decade ago, according to Bloomberg Economics.

Its new GDP tracker puts world growth at 2.1 percent on a quarter-on-quarter annualized basis, down from about 4 percent in the middle of last year. While there’s a chance that the economy may find a foothold and arrest the slowdown, “the risk is that downward momentum will be self-sustaining,” say economists Dan Hanson and Tom Orlik.

The reasons for hope? The Federal Reserve’s decision to pause its interest-rate hikes, a U.S.-China trade truce and the fading of the shocks that battered Europe in 2018 could mean stabilization is around the corner. Other central banks have also stepped up, with the European Central Bank last week announcing new measures to help the economy through the current weakness.

But the global economy is not out of the woods. The OECD’s latest composite leading indicator — published Monday — indicates easing momentum in the U.S., the U.K., Canada, and the euro area as a whole, including Germany and Italy. There are, however, signs of stabilization in China.

Despite the gloom, ECB policy makers have been keen to put a brave face on the deterioration, pushing the view the euro zone is experiencing a slowdown, not a recession.

“We are still seeing robust economic growth, although it’s less strong than before,” Executive Board member Benoit Coeure said in an interview with Italian newspaper Corriere della Sera published Monday. “It will take longer for inflation to reach our objective, but it will get there. We are reacting to the developments we have seen so far.”

“The cyclical upswing that took hold of the global economy in mid-2017 was never going to last. Even so, the extent of the slowdown since late last year has surprised many economists, including us.”

The probability of a major contraction in the economy shot up to 73%, from just 24% in December, says UBS

The chances of a US recession just spiked in the last month by a magnitude that UBS economists says shocked even them.

The probability of a major contraction in the economy shot up to 73%, from just 24% in December, says UBS. That’s the largest one-month jump in recession risk since 1989, the economists led by Pierre Lafourcade said in a March 7 report.

"Investors are starting to become concerned about a significant economic slowdown over the next 2 years, & this will have an impact on risk assets like equities… the outlook is not very bright for some of the big economies, especially China," said Fio Dejesus, analyst at RCBC

This is online sales. December is the last data point. Do you believe this? pic.twitter.com/SV5KM2vKtU

CLI # 2/2: When the global economy is in a downturn, as defined by the @OECD composite leading indicators, stock markets usually fall. Hence, Q4-18 looks more logical than Q1-19, and much is riding on continued support from monetary and trade policies. pic.twitter.com/WY567gma9z

“In the last 90 days we’ve seen slowing in the global economy.” Jerome Powell

US survey based “soft data” is collapsing to levels not seen since 2012 when Fed launched QE3. Will hard data follow? @biancoresearch via @SoberLook pic.twitter.com/q5a49WGtWH