A crowdfunding campaign started for police in the wake of gilets jaunes (yellow vests) protests has reached €1 million.

The crowdfunding page came in reaction to a campaign set up for a former French professional boxer who handed himself in to police on Monday after he was filmed repeatedly punching officers at a gilets jaunes protest in Paris.

The crowdfunding organisation, Leetchi, on Tuesday shut down the page for the former French professional boxer.

The crowdfunding campaign for the policemen was badly received by some social media users who accused it of being “illegal”. Some cited a rule that prohibits police from collecting money from civilians.

However, French lawyer Guillaume Champeau who specialises in digital rights said in a Twitter thread the campaign was legal because the money was not being directly collected by police but by a third-party, which is Muselier in this case.

Since the page for police was launched, a prominant “gilets jaunes” (yellow vests) activist on Wednesday launched a further counter-campaign.

The new crowdfunding pot, started by Eric Drouet, was established to raise money for injured protesters.

€114,000 raised for boxer who punched police at gilets jaunes protest

The online fundraising platform Leetchi received €114,000 for Christophe Dettinger before the site closed the donation page after politicians expressed outrage on Tuesday. Leetchi said the funds were intended only for legal fees.

Dettinger handed himself in to police after clashing with officers on a bridge in Paris during an anti-government protest on Saturday.

The 37-year-old, said in a video that he had “boiled over” after being teargassed with his wife on his eighth Saturday protest. “I reacted badly. Yes, I reacted badly,” he said, adding he had seen the “repression” of the police towards protesters.

He added: “I’m demonstrating for all the pensioners, for the future of my children, for single women, for everything we’re fighting for. I am a gilet jaune. I have the anger of the people in me … it’s always the little people who pay.”

Yellow vests: the prefect of Cher will ban any gathering in the center of Bourges

While yellow jackets intended to relocate their gathering out of Paris for the act 9 of their mobilization, by privileging a demonstration in the center of Bourges, the prefecture announced that it would prohibit any gathering there.

Among other yellow vests, had called for a rally in the city of Bourges, for the act 9 of their mobilization to be held on January 12. However, the prefect of the department announced that it would ban any event in the center of the city.

However, the prefect of the department announced on January 11 that it would ban any demonstration in the center of the city.

60% of speed cameras destroyed in France by the Yellow Vests

The BBC’s Hugh Schofield, in Paris, said evidence of the vandalism is visible to anyone driving around France, with radar cameras covered in paint or black tape to stop them working.

But the extent of the damage – now believed to affect more than half of all 3,200 speed cameras in the country’s network – was unknown until Mr Castaner’s statement on Thursday.

He said the devices had been “neutralised, attacked, or destroyed” by members of the protest movement. 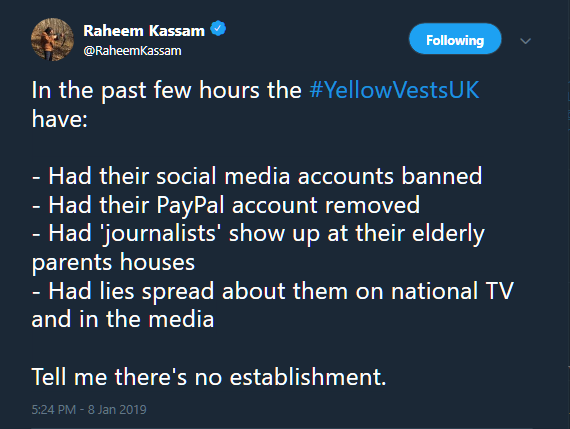