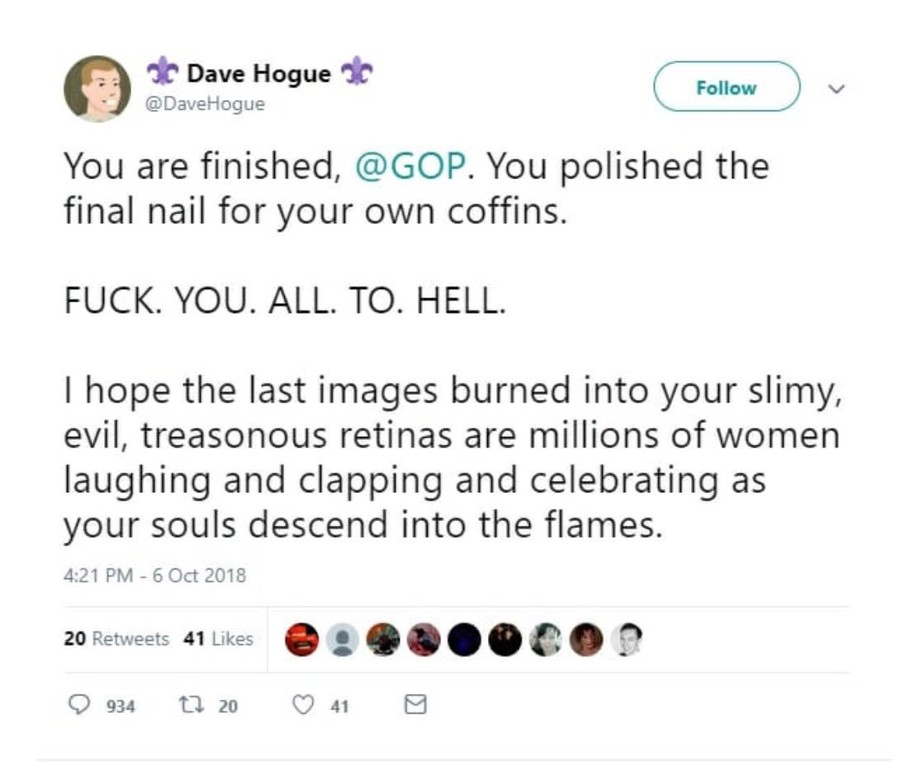 In case you were wondering, the featured picture in the article is a screen-shot of a since-deleted tweet from a senior Google employee, sent immediately after the Kavanaugh confirmation. But have no fear: as a whole, Google is completely unbiased and you can trust them totally. Why? Because they’re professional, first and foremost, and they’re not run by unhinged social justice warriors and crazed leftists. Moreover, since the internet is located in the anarcho-capitalist dimension, where government regulation need not apply, Google must remain unregulated. In the real world, the Federal Government had to regulate phone companies, banks, power companies, child labor, we have environmental regulations and so on and so forth. But not tech companies, we must trust them to run the world as they see fit, because they’re the kosher guys. The chosen ones.

Seriously speaking, Google is the world’s most powerful company in history and arguably, a monopolistic tech behemoth. Google is basically the gatekeeper of the internet. They own the world’s biggest search engine, built using military technology and taxpayers’ money. They also own world’s biggest mobile OS system, Android that is. What’s Android’s market-share? 80 percent or more?  Google also controls, more or less , the advertising market by controlling Internet traffic (basically if one can make money or not on the interwebz) via Google words/ads and via their search engine (90%+ market share), that can shadow-ban/ban altogether your site/business at a whim. Or rank it higher in search results if you pay them money.  Google reads all your emails via its G-mail service and they admit it. Chrome tracks all your internet activity. I could go on and on.

There were some stories in recent  years which drew my attention. First, according to Bloomberg news, Google has dropped out of the bidding for the Pentagon cloud initiative, because it went against their values . It’s against their  corporate values to help defend the country which allows them to be filthy rich totalitarian left wing idiots?  Mind you, Google is helping the communist government of China to censor/imprison their citizens and to create a high-tech panopticon. However, no one can expect leftists to be consistent. They are always using double-standards to advance their political agenda, they know that we know, and they don’t care.

More recently, it has been revealed that “gorillions” of Google+ users (Google’s failed social media platform that is) had their private data compromised, because the company decided not to let them know they’ve been hacked. How come, you asked? Well, Google feared that the government would step in and bust their monopoly, or start regulating them, or whatever, not to mention a bad case of damage to their street-rep, which in Google’s case is a joke anyway for anyone paying attention to their actions. So, they kept the story under the rug. Until now, when the WSJ blew the whistle on them.

A software glitch in the social site gave outside developers potential access to private Google+ profile data between 2015 and March 2018, when internal investigators discovered and fixed the issue, according to the documents and people briefed on the incident. A memo reviewed by the Journal prepared by Google’s legal and policy staff and shared with senior executives warned that disclosing the incident would likely trigger “immediate regulatory interest” and invite comparisons to Facebook’s leak of user information to data firm Cambridge Analytica. Chief Executive Sundar Pichai was briefed on the plan not to notify users after an internal committee had reached that decision, the people said.

And if you think it’s only Google doing that crap, you’re clueless on how the world works. Keep in mind it’s the same Sundar Pichai, the Google CEO, who flew back from vacation to personally fire James Damore for writing an internal memo that questioned Google’s practice of hiring people based on identity politics/social justice, rather than their merits.

See also  Rep. Massie says everyone at the CDC needs to be fired for lying about coronavirus

Google is evil.  Always has been. Always will be.  So is Facebook. By the way, the founders of Google and Facebook (check out this article from HuffPo btw: Why Google Is More Jewish Than Facebook )drank a lot of beer  and smoked a lot of pot when they were 17 years old.

We need a FBI investigation!

Joke aside, anyone who does not agree with totalitarianism, liberal group think or the censorship of Google, should seriously consider dropping all Google products, especially their search-engine. Google is more at home working with the Chinese Communist Party-fact. Any liberal company  that says it does no harm is likely doing the opposite-fact.

Google exploits American naivety.  Recent rants by top Google execs say it all. Google has a 90% share of Internet search, but does not have the executive leadership, culture, nor governance standards to prevent abuse of their extremely dominant market position.

Instead, examples abound of their abuses to manipulate public opinion, influence political outcomes, and even partnering with Communists in China for censorship. This partnering with communists is happening while they refuse to aid in the defense of the United States. It is no secret that Google in practice acts as an arm of the Democratic party. Simply watch the YouTube video post election of the dweebs bemoaning the results. Perhaps those dweebs with the pinwheel beanie hats who asked sarcastically if there was anything positive that came from the last election should be released back to their parents basements (or their country of origin) to reflect upon the the meaning of integrity and public trust.

Google executives, including Pichai, are either ethical cowards devoid of the strength of integrity required to run a public company, or, they are deliberately  deceptive. They appear to choose the easy wrong instead of the hard right thing to do at every turn.

In any case, it is time to regulate this behemoth.