I have now heard from three experts that this coronavirus is at least 10 times worse than the Chinese government is reporting. First a top military consultant; then John Thomas (Editor of the Mad Hedge Fund Trader), who sat next to an expert from Wuhan on a plane; and recently from Erik Prince, the founder of Blackrock (the infamous black ops company).

Now I am looking at the most recent reports, seen here below, and something looks a bit fishy right off the bat. The infections and deaths are correlating in real time, which means they are surging together. That doesn’t make sense unless people die almost immediately once the symptoms emerge. 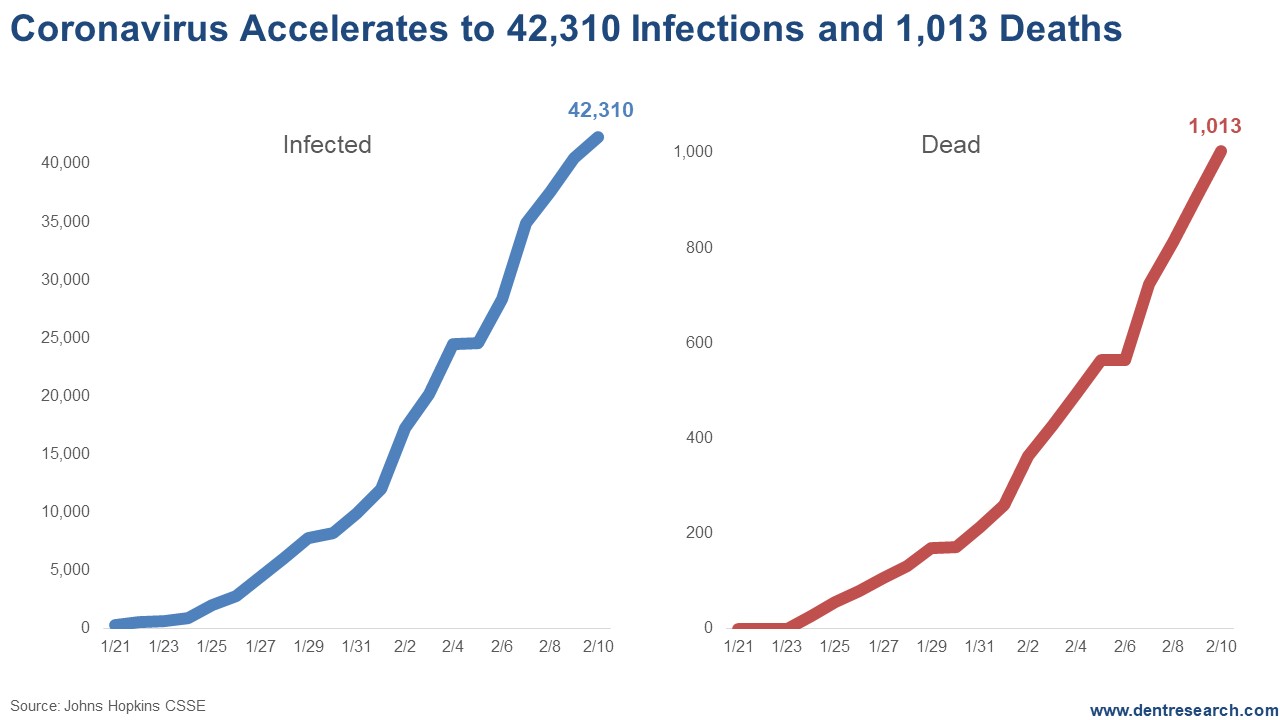 So, we are flying in the dark here, as the Chinese government is notorious for manipulating and suppressing bad news. But if these three experts are right, and things are really 10 times worse than what’s being reported, the infections could already be 400,000+, with deaths over 10,000.

Experts from the University of Hong Kong are also all over the map in forecasts. Dr. Leung, the Chair of Public Health Medicine there, says at worst that it could continue to spread exponentially at a 1% spread rate compounded and ultimately infect 60-80% of the world, with as many as 51 million deaths, mostly in China. That sounds far-fetched to me.

But the unusual aspect to this virus is that it is contagious two weeks before symptoms show up, allowing it to spread quicker. And in China, they are suppressing the sale of cough syrups and things like it so that people can’t hide their symptoms to avoid quarantine. That’s how perverted this whole thing is.

John Nicholls, a professor of pathology, says that the coronavirus is more like a severe cold and should burn out in about six months. It’s currently spreading in East and Southeast Asia, where high sunlight, temperatures and humidity work against the virus, especially in the coming months. This actually sounds more logical to me.

The bigger point is that this has already resulted in something like 300 million people being quarantined to their cities in China. Their rapidly growing supply chain breakdowns in production are hitting globally – especially South Korea and the U.S. Starbucks had to shut down big chunks of stores throughout China. And people have a greatly out-sized reaction to such potential pandemics. The normal flu is more dangerous in the U.S. than this is likely to be.

As I eluded to last week, this is something that money printing cannot stop. It can only help bolster the economic impacts…

If the bad case scenarios do accelerate instead, this could be the pin that pricks the greatest bubble in the world: China! And everything will implode from there, and money printing will not be fast enough or have the credibility to stop the worst meltdown since 1929-32.

We are in the dark here, as no government experts, even here, want people to panic over this. Hence, we aren’t getting good information.

So we’ll keep watching, as it is the biggest short-term economic factor, along with whether the Fed and other central banks will keep printing money aggressively to counter the economic impacts. And we are monitoring the Fed weekly.