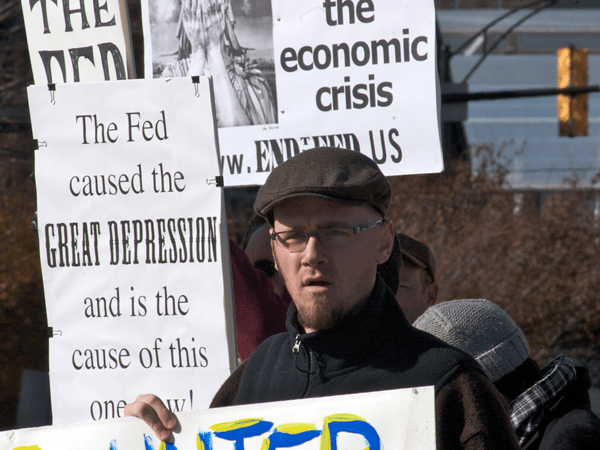 The only other time the Fed did an “unwind” of quantitative easing similar to today’s market conditions was back in 1937.

And that didn’t work out so well. The credit markets froze, and the market would not start recovering until 1942. See the 1939 – 1942 DOW chart below:

The same chart pattern may happen soon under the guise of “balance sheet normalization.”

In fact, “balance sheet normalization” may become known as both the greatest and worst economic magic trick the Fed has ever performed.

The “greatest” because a hawkish Fed continues to unwind the money it printed as a result of Quantitative Easing (QE), and that money simply goes “POOF!”

The worst, because this period of Quantitative Tightening (QT) is ill-timed. Jim Rickards explains what QT is in one sentence:

Instead, the Fed will let the old bonds mature, and not buy new ones. That way the money just disappears and the balance sheet shrinks.

The result of this unwind could also set a ticking time bomb for the economy. That “time bomb” will arrive in the form of the Fed’s addiction to printing money.

The idea was, by pumping cash into the markets, the Fed would be able to buy securities and “save the economy” from the 2008-2010 recession. The Fed spent a lot of effort selling this idea to the public.

But that QE-printed money came with a heavy price tag. The Fed now needs to normalize its balance sheet before another big recession hits. (See chart below). 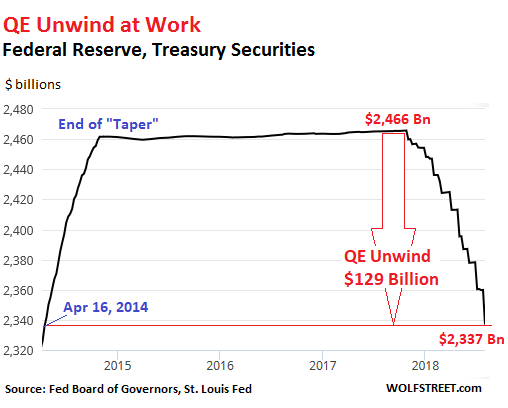 As you can see from the chart, the Fed started the QT process in October 2017. So what’s the problem?

See also  If Japan and China are not buying, then who is going to when QT accelerates?

A Fed in Denial Hits the “Unwind Accelerator”

The problem is, the Fed put so much cash into the market with QE, their QT (unwind) has a big job to do. This leaves the door open for big problems.

The Fed would cut rates and set loose credit policy again, with the potential of dropping rates close to zero (again) before this new recession is over.

Then another shot of QE would be necessary, bringing with it another round of QT. The perpetual market manipulation machine would have to keep chugging along just to keep the U.S. economy afloat.

Finally, the resulting uncertainty would cause even more problems and market confusion. And to make matters worse, the Fed seems like it’s in denial.

In a recent statement, they seem to be under the illusion that their “printed money plan” is working just fine, so they can keep raising rates. They can “roll off” treasuries like water rolling off a duck’s back.

In short, they’re hawkish and feel good about staying the course.

But the U.S. credit-dependent economy needs deposits, loans, interest, and other financial instruments to fuel it. If any of that freezes, the bomb explodes.

And Wolf Richter agrees, saying “all bets are off” if things go sideways in the credit markets:

When the economy eventually slows down enough to where the Fed feels like it needs to act, it will cut rates, but it will let the QE unwind proceed on automatic pilot toward “normalization,” whatever that will mean. That’s the stated plan. And the Fed will stick to it – unless something big breaks, such as credit freezing up again in the credit-dependent US economy, at which point all bets are off.

So if something big “breaks,” and the economic time bomb does explode, a major market crash may result which would put 2008 to shame.

See also  Fed members are tripping over each other to become more hawkish.

Prepare for the “Ticking Time Bomb” to Go Off

The truth is, the U.S. has (at best) modestly recovered from 2008. Some experts think there was no recovery, because the economic “hole” created was too deep.

Either way, it’s time to have a backup plan in case the economic “time bomb” created by the Fed goes off.