The collateral supporting the global mountain of debt is crumbling as speculative bubbles deflate.

A great many freebies are being tossed in the Helicopter Money basket. That households experiencing declines in income need immediate support is obvious, as is the need to throw credit lifelines to small businesses. But beyond those essentials, the open-ended nature of Helicopter Money has unleashed a frenzy of political favors and giveaways that have little to do with helping households and everything to do with rewarding favored cronies, cartels and interest groups.

As Gordon Long and I explain, the short-term “pain relief” of Helicopter Money won’t cure the economy’s financial disease; rather, it will act as a catalyst for longer-term disruption and decline.

None of the giveaways being discussed address the core causes of our systemic financial disease:

— The use of debt to keep up with the soaring costs of essentials (rent, healthcare. childcare) and aspirational goods (iPhones) and services (vacations)

— Repricing of risk and risk assets

The stability of the entire system is increasingly fragile and brittle. The abuse of money-printing–creating currency to benefit bloated, inefficient, parasitic, predatory institutions, cartels and monopolies–is further eroding already-decaying confidence in monetary and fiscal authorities and policies.

The collateral supporting the global mountain of debt is crumbling as speculative bubbles deflate. What happens to margin debt when the $300 stock falls to $100? What happens to the $1 million mortgage when the decaying bungalow’s value falls from $1.2 million to $400,000?

The inevitable result of creating currency is excess of the creation of goods and services is a decline in purchasing power which we experience as inflation / shrinkflation (getting lower quality and less quantity even though the price has remained the same).

READ  No Money? 9 Ways to Prep for FREE (or Almost Free)

This loss of putchasing power has been masked by bogus statistical tricks and shrinkflation, but as the Helicopter Money trillions flood through the economy and global supply chain disruptions cause prices to rise, the usual bag of tricks will no longer be enough to hide the higher costs and declining purchasing power.

Then there’s the psychological impact of the reverse wealth effect as households and enterprises see their net worth and income dropping. The confident euphoria required to borrow and spend freely has evaporated and will not be returning, regardless of how much currency is created and distributed.

Gordon and I discuss these topics in this 37-minute video: 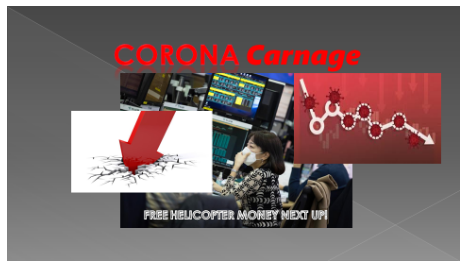 If you missed our three-part series: