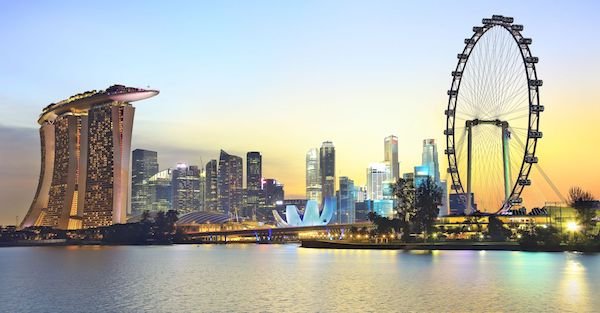 In 1965, the tiny, fledgling country of Singapore seemed like it was on the verge disaster.

It had only just split off from Malaysia due to severe racial tensions between them, and just two years had passed since independence from the United Kingdom.

Singapore started its nationhood with no natural resources, no army, and almost no infrastructure.

Unemployment was high. Invasion from Indonesia was a constant threat. GDP per capita was just $410, less than 1/10th the US per capita GDP at the time.

(Per capita GDP is a common way to measure a country’s wealth.)

Yet within four decades, Singapore would surpass the United States in per capita GDP. And today, it’s the 3rd richest country in the world.

Perhaps it’s no coincidence that Singapore also ranks second in the world for ease of doing business, and often ranks #1 in competitiveness, safety and [lack of] corruption.

Singapore is an international success story in going from third world to first world in just one generation… it normally takes hundreds of years for a country to achieve this kind of success (if it comes at all).

How it got there is not only an example, but a warning.

Singapore understood its position in the world and exploited it.

It’s a tiny island in the middle of the Malacca Strait (where 40% of the world’s maritime trade flows).

Today, the port of Singapore is the second busiest in the world by shipping tonnage.

Contrast that with what’s happening in America…

Recently, New York socialists took to the streets to prevent Amazon from building a headquarters in the city, which would have created 25,000 jobs and brought tens of billions of dollars to the economy.

The opposers couldn’t stand to see a profitable corporation get a tax break… even if it was a net benefit for the city (remember, big company=bad, no matter what).

But the problem is bigger than just demonizing companies.

In effort to promote local business, America is threatening a trade war with its main trading partner, China.

Singapore knew the key to success was opening up to foreign trade and investment. It invited companies from all over the world to relocate and invest there.

That means limited bureaucracy in affairs that can be handled privately.

Again, the US is moving in the opposite direction…

Federal government spending as a percentage of GDP has soared over the last 40 years (from 31% to 38%).

And the proposed New Green Deal proposes to boost public spending by another 50% of GDP. Then there are the rising calls for free healthcare, free education, guaranteed jobs, etc.

It’s incredible. History is full of examples of countries who close themselves off from opportunity, wage wars, and spend far more than they earn. They go broke.

There are also examples like Singapore—countries who conservatively save, invest wisely, trade, and grow.

It’s all part of what I call the Universal Law of Prosperity: produce more than you consume. Simple.

Yet most western government are willfully ignoring this basic principle and spending themselves into insolvency.

The bad news is that you and I have no control over what any government does. Nor can we stop this giant trend of anti-growth, anti-business, anti-prosperity Socialism from taking hold.

But we can use common sense and adhere to the Universal Law of Prosperity ourselves.

Becoming wealthy and prosperous doesn’t mean you have to start the next multi-billion dollar tech company.

I would also add “avoiding huge mistakes” to that list, especially when it comes to money.

One giant mistake can wipe out a lifetime of savings. So it’s important to always think about risk when making financial decisions: What could go wrong? How much of a loss will I suffer if that happens? Am I willing to suffer that loss?

This is one of the reasons why I tend to focus on buying deeply undervalued assets: I hate taking risks.

I think it goes back to my childhood… I grew up in a lower middle class household where my parents each worked multiple jobs. Money was scarce.

And no matter how successful I become today, I’ve always maintained a deep sense of value.

That carries over to my investment decisions.

When given the choice, I’m always going to want to buy $1 worth of high quality assets for 50 cents.

And if you look hard enough, they’re out there.

I’m headed to Venezuela soon to scout out some assets selling at firesale prices.

But you don’t have to be that extreme.

It’s possible to find well-managed, profitable companies on various stock markets around the world whose shares are selling for less than the amount of cash the company has in its bank account.

That’s pretty much the definition of a high quality, deeply undervalued asset.

Granted, those deals are tough to find, so I at least want to recommend checking out our Chief Investment Strategist’s research to give you more concrete ideas.

His name is Tim Staermose, and he’s a specialist in high quality, ultra-deep value investments– profitable businesses whose share prices are often FAR below what the company’s assets are worth.

I know he’s preparing a report right now on a fantastic investment he’s recently discovered which ticks all the boxes.

We’ll share some more details this week when he wraps up.

In the meantime, you can read more on Tim’s style of investing in this free resource.