The Biden Administration is discussing hiking corporate taxes to pay for the proposed infrastructure spending package. While the goal is to ensure the “rich pay their fair share,” a look at history suggests changing tax rates will have very little impact on economic outcomes.

Leading up to, and following, the passage of the Tax Cuts and Jobs Act (Trump Tax Cuts) I wrote a lot of analysis on:

What we know now, is that our analysis was correct. As noted, corporate behavior didn’t change, and instead of jumpstarting economic growth, tax cuts led to a wider dispersion of wealth inequality.

As I stated then:

“While the mainstream media hope is all this cash will be flowing back into the economy, the reality is that it will primarily go to stock buybacks. Again, while not necessarily bad, it is the ‘least best’ use of the company’s cash. Instead of expanding production, increasing sales, acquiring competitors, or making capital investments, the money gets used for a one-time boost to earnings on a per-share basis.”

While wages did rise marginally, due more to tightness in the labor market rather than tax cuts, corporations failed to share the wealth. In fact, the ratio of profits to worker’s wages has materially worsened since the enactment of tax cuts. In other words, the “devil is in the details,” as “corporate cronyism” devoured Washington politics.

“The greatest trick the Devil ever pulled was convincing the world he didn’t exist.”– The Usual Suspects (1995)

So, if “tax cuts” didn’t work, how about Biden’s plan to “increase” taxes?

Over Estimation Meets Over Spending

Given the national debt is rapidly approaching $30 Trillion, with deficits expanding rapidly, even some of the Democratic party is starting to become uncomfortable. As such, in order to get another massive spending bill passed, it will require increased taxes to “pay for it.”

While Biden’s plan includes increased estate and personal taxes, we are going to focus on corporate taxes for the purposes of this article. As shown, Biden hopes to raise $1.4 Trillion in revenue from corporations, along with roughly $2 trillion in payroll and individual income tax increases. 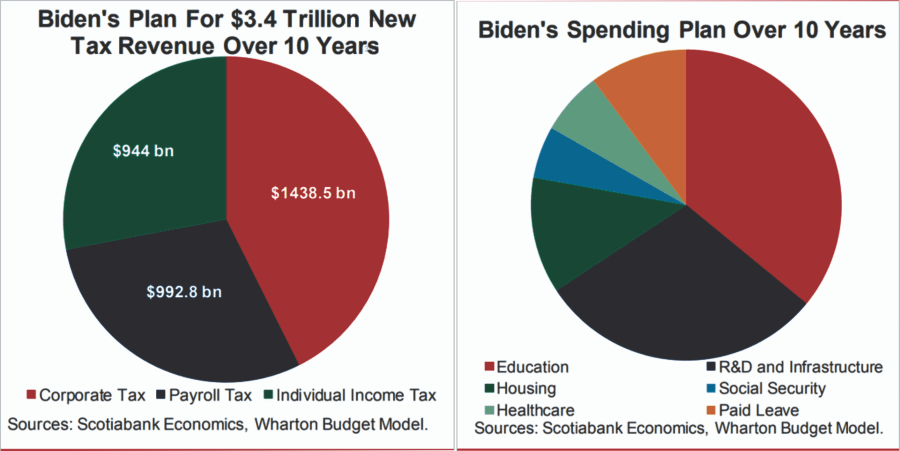 In theory, those increased revenues will “pay for” the spending on the infrastructure plan. The problem is we aren’t talking about hiking taxes just for a single plan, but rather the gross excess spending of the Government in total. Here is the problem:

According to the Center On Budget & Policy Priorities, in 2020, roughly 75% of every tax dollar went to non-productive spending.

But there is more to the story as we discussed in “Stimulus Won’t Solve Poverty:”

“In the fiscal year 2019, the Federal Government spent $4.4 trillion, amounting to 21 percent of the nation’s gross domestic product (GDP). Of that $4.4 trillion, federal revenues financed only $3.5 trillion. The remaining $984 billion came from debt issuance. As the chart below shows, three major areas of spending make up most of the budget.”

Think about that for a minute. In 2019, 75% of all expenditures went to social welfare and interest on the debt. Those payments required $3.3 Trillion of the $3.5 Trillion (or 95%) of the total revenue collected. Given the decline in economic activity during 2020, those numbers become markedly worse. For the first time in U.S. history, the Federal Government will have to issue debt to cover the mandatory spending.“

Think about that for a moment and then realize the Government added another $5 trillion in deficit spending on top of the current deficit spending. Such is why it is easy to understand why increasing taxes is almost futile.

However, let’s dig in. As shown in the chart below, changes to tax rates have a very limited impact on economic growth over the longer term. The difference today is that with economic and revenue growth weak, taxes and employment are two of the largest impacts to profit margins for any business. As such it is not surprising we see corporations opting for increases in productivity to reduce wage growth. Increasing taxes in this environment will likely accelerate that process. Historically, what leads to stronger employment is sustainable economic growth. Such should lead to higher wages, increased aggregate demand, and higher rates of production. In other words, employment adjusts over time to respond to the strength and direction of the economy rather than the movements in tax rates. The chart below shows economic growth versus employment. Hiking Taxes At The Wrong Time

The differences between today’s economic and market environment could not be starker. The tailwinds provided by initial deregulation, consumer leveraging, declining interest rates, and inflation provided huge tailwinds for corporate profitability growth. The chart below shows the ramp-up in government debt since Reagan versus subsequent economic growth and tax rates. As noted, rising debt levels are the real impediment to longer-term increases in economic growth. When more than 100% of your current Federal Budget goes to entitlements and debt service, there is little left over for the expansion of the economic growth. Corporations Don’t Pay As Much As You Think

So, back to Biden’s hope that tax hikes will eventually “pay for” non-productive spending sprees.

In order for “infrastructure” to be beneficial, it should be “paid for” either through taxes or by a positive return on investment. According to the Committee For A Responsible Federal Budget, the latter is not likely.

“As the details come out, you’ll hear advocates claim these new investments will actually pay for themselves through new growth or that deficits don’t matter.

That wasn’t true during the 2017 tax cut debate and it certainly isn’t true now.

Investing in reliable and resilient infrastructure can help the economy, but the research is clear that the return is fairly modest. In fact, analysis from the Congressional Budget Office and Penn Wharton Budget Model suggests that returns on debt-financed infrastructure investments could well be negative.” So, if the investment themselves are not “productive,” then tax increases should not be used to pay for those expenditures. There are two reasons for this.

As discussed in “Tax Cuts Fail To Trickle Down,” corporations pay only a small fraction of the total taxes collected. The second issue is that corporations pay much lower tax rates than “statutory” rates suggest. The first chart below shows corporate profits before and after-tax, and the effective tax rate. When President Trump cut the tax rate to 21% corporations were paying a 14% tax rate. If we assume President Biden reverses Trump’s tax cuts, corporations will indeed pay more in taxes. However, that revenue collection will fall far below current estimates even with the most optimistic of assumptions. This excludes the negative impact of higher taxes on employment, growth, and wages, which lowers overall tax collections.

As I discussed in the “3-Big Lies About Tax Cuts:”

“[Cutting] tax rates CAN make a difference in the short run, particularly when coming out of recession as it frees up capital for productive investment at a time when recovering economic growth and pent-up demand require it.”

The opposite is true when “hiking” taxes when the economy is very weak. Such diverts capital away from “job creators” to areas where money, as noted, will have a negative impact on growth.

As I stated at the outset of this missive, corporations will protect their profit margins, and share prices, at the expense of workers. More importantly, we continue to overlook the economic challenges which are the primary culprits of the ongoing economic erosion.

While “infrastructure” continues to be the “Trojan Horse” for continued Government largesse, it does not address the challenges weighing on economic growth, wages, and standards of living.

Increasing debts and deficits in hopes that somehow the economy will recover has been an economic fallacy for far too long. The U.S. economy, and the financial system, remain dependent on ongoing liquidity supports just to function. For politicians, it has become a series of schemes and tricks to get votes and stay in office.

While such may work in the short term, the long-term consequences continue to play out in real-time.

If none of this is true, then why has “socialism” become a “thing” in what once was considered the greatest capitalist economy on the planet?