For law enforcement, Congress and even journalists, exposing misdeeds is like peeling an onion. Each layer you remove gets you closer to the truth.
So it is with the scandalous behavior of the FBI during its probe into whether President Trump’s campaign conspired with Russia in 2016. One layer at a time, we’re learning how flawed and dirty that probe was.
A top layer involves the texts between FBI lawyer Lisa Page and her married lover, Peter Strzok, the lead agent on the Hillary Clinton e-mail probe. They casually mention an “insurance policy” in the event Trump won the election and a plan for Strzok to go easy on Clinton because she probably would be their next boss.
Those exchanges, seen in the light of subsequent events, lead to a reasonable conclusion that the fix was in among then-Director James Comey’s team to hurt Trump and help Clinton.
Another layer involves the declassified House memo, which indicates the FBI and Justice Department depended heavily on the unverified Russian dossier about Trump to get a warrant to spy on Carter Page, an American citizen and briefly a Trump adviser.
The House memo also reveals that Comey and others withheld from the secret surveillance court key partisan facts that would have cast doubt on the dossier. Officials never revealed to the judges that the document was paid for by Clinton’s campaign and the Democratic National Committee or that Christopher Steele, the former British spy who compiled the dossier, said he was “desperate that Donald Trump not get elected.”

For Clinton, creating a cloud over Trump’s presidency and helping to put the nation through continuing turmoil is a victory of sorts. America is fortunate it’s her only victory.

www.foxnews.com/opinion/2018/02/12/michael-goodwin-did-hillary-clinton-pull-off-dirtiest-dirty-trick-in-us-presidential-history.html
In the Head of Hillary 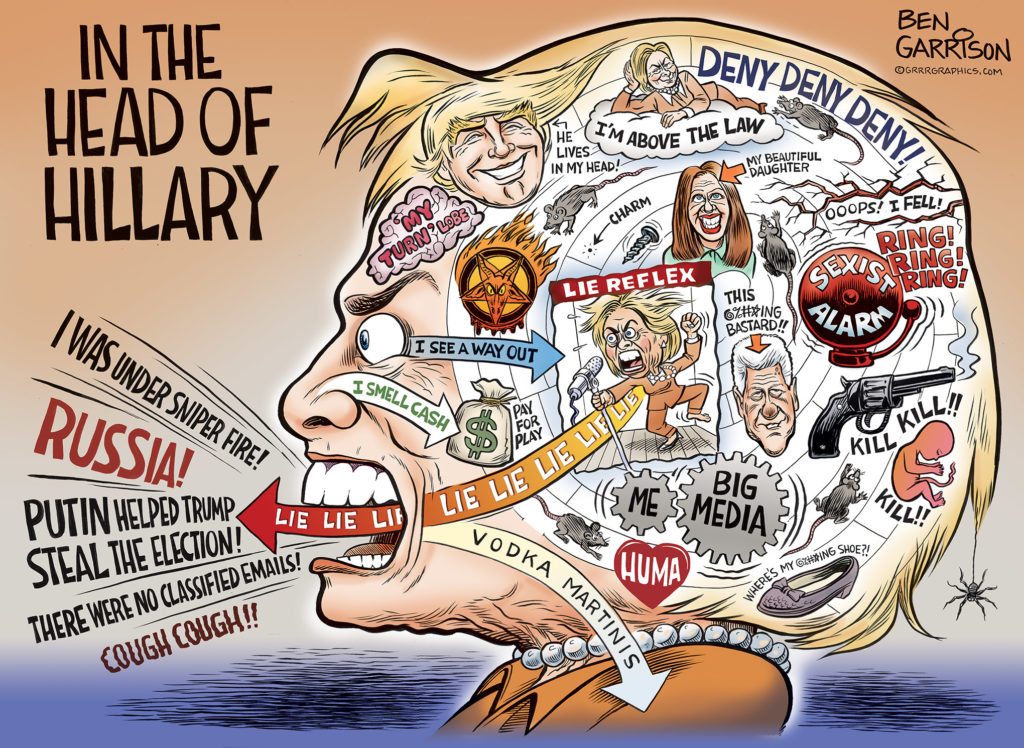 8 thoughts on “Hillary Clinton tried to pull off the dirtiest dirty trick in US presidential history!”