Summary
Births in America continue to tumble despite a growing child bearing population.
The growth among the child bearing population is decelerating and this population will begin outright declines around 2029.
US births are likely to continue falling, faster and far deeper, while current Census estimates continue to anticipate growth (continually just around the corner).
The chart below is the 20 to 40 year old US population (blue line) and the columns are the annual change in that population (maroon columns).  The 1960 to 1990 population surge in the wake of the baby boom is easy to see as is the echo-boom from early 2005 through the 2020’s. 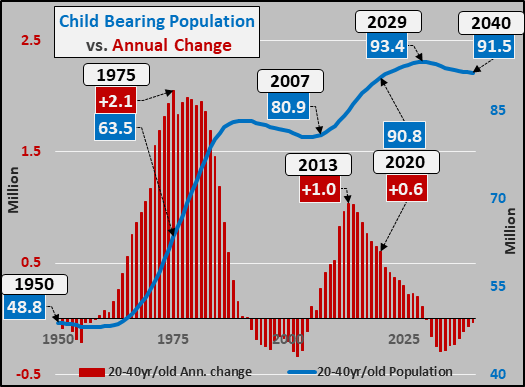 From a births perspective, it doesn’t matter what the total US population is…the only population that matters are those capable of child birth.  I show the 20 to 40 year US population as they are responsible for over 90% of the births while those under 20 and those over 40 are producing so few children relative to 20 to 40 year olds as to be statistical noise (births per thousand by age group is detailed by the CDC HERE).
From 1957 through 2007, the child bearing population increased by 72% while births increased only 0.2% (just two tenths of 1%).  Obviously, it was the rise in the child bearing population offsetting the collapse in the fertility rate that maintained the flat birth rate. 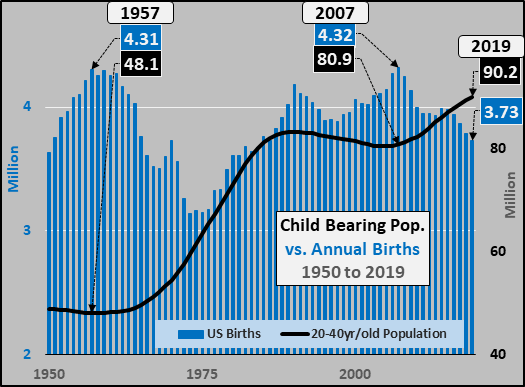 2007 through 2019 was the period that births were anticipated to spike with the rising echo-boom child bear population busily reproducing.  An echo baby-boom was anticipated.  Instead, a prolonged and deepening baby-bust has taken place.  According to the CDC, in the 1st quarter of 2019 births continued to plummet across the board, but I’m assuming 2019 births will come in slightly less negative through the remainder of 2019 (I’m likely overestimating 2019 actual births at 3.73 million). 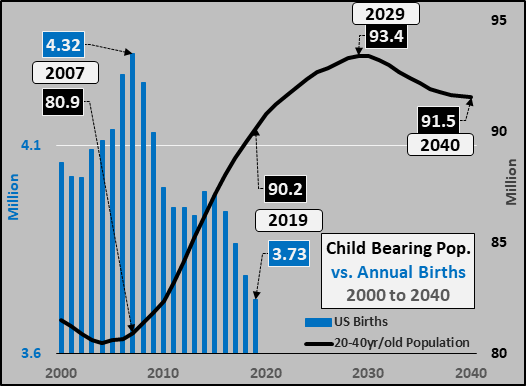 The implications for what comes next should be obvious.
Census birth estimates from 2000 (plus the nearly identical ’08 estimate) and 2017 are displayed below.  Clearly, since 2008, the Census is having a hard time adequately curbing their enthusiastic projections.  Although each projection is lower than the last, each projection continues significantly overestimating births.  With decelerating growth among the child bearing population through the 2020’s and outright child bearing population declines in the 2030’s…there is no reason for birth projections to be rising but the Census is having a very hard time catching down to reality.  In truth, there is good reason to begin projecting ongoing and deepening birth declines in the 2020 Census estimate (my estimate at a realistic 2020 Census estimate is included below, blue dashed line). 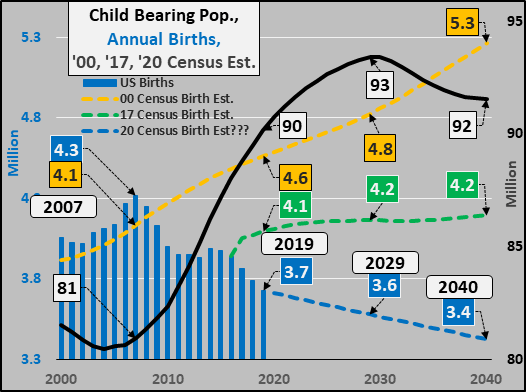 From 2009 through 2019, actual births versus estimated births were 5.3 million fewer than anticipated (and this includes all births, whether the mother was here legally or otherwise).  This is a crack in present and future growth nearly five times larger than all Americans lost in all wars the US has ever fought!  That’s 5.3 million Americans not in existence and not consuming the average $25,000 per/capita annually throughout their lifetimes.   But what is now a crack turns into a chasm, taking the same ’08 birth estimate versus a more realistic birth estimate through 2040, this represents almost 34 million fewer births (-22%) than was estimated in 2000 and 2008.  The Census will be forced to continue collapsing their total US population projections, as they have been doing since 2008 (detailed HERE).  The implications for declining potential economic growth based on collapsing quantity of potential consumers (while productivity, innovation, and advancements continue increasing capacity…for a declining basis of consumption) should have the CBO and the like heads spinning.
A continuation of the current falling fertility and birth rates is a really, really good bet (chart below). 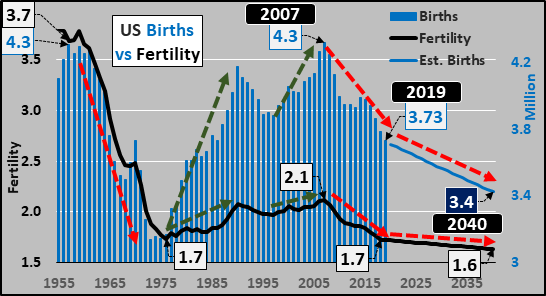 The age segment that will continue to grow rapidly, the post childbearing 45+ year old population (red line, below).  Notice even showing the broadest child bearing population (15 to 45 year-olds, yellow line), the stall in growth since 1990 relative to the growth of elderly.  Among the 45+ year-olds, the majority of population growth over the coming decade will be among 75+ year-olds, a segment with less than 10% labor force participation, consumes at very low relative levels, and utilizes little to no credit (nor should they, primarily living on fixed incomes). 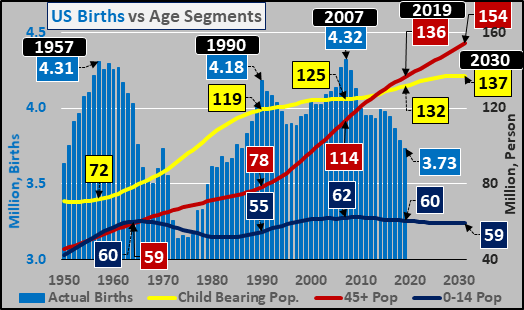 The debt based US economic system premised on perpetual consumptive growth (as a dual net importer and net debtor) is now facing long term depopulation from the bottom-up while the numbers of elderly surge.  But only those who suggest this is likely to lead to some sort of “hiccup” are the crazy ones?!?
Population data via US Census Population Projections and UN World Population Prospects 2019
510 views