Last year was a year of change for the economy, including record-low unemployment rates, ballooning national debt, and increased income inequality. However, 2019 also brought about drastic changes in wealth for some of the world’s richest individuals. Our new visualization illustrates some of the most dramatic upswings and downswings for billionaires worldwide, as measured by the changes in their net worth from 2018 to 2019. 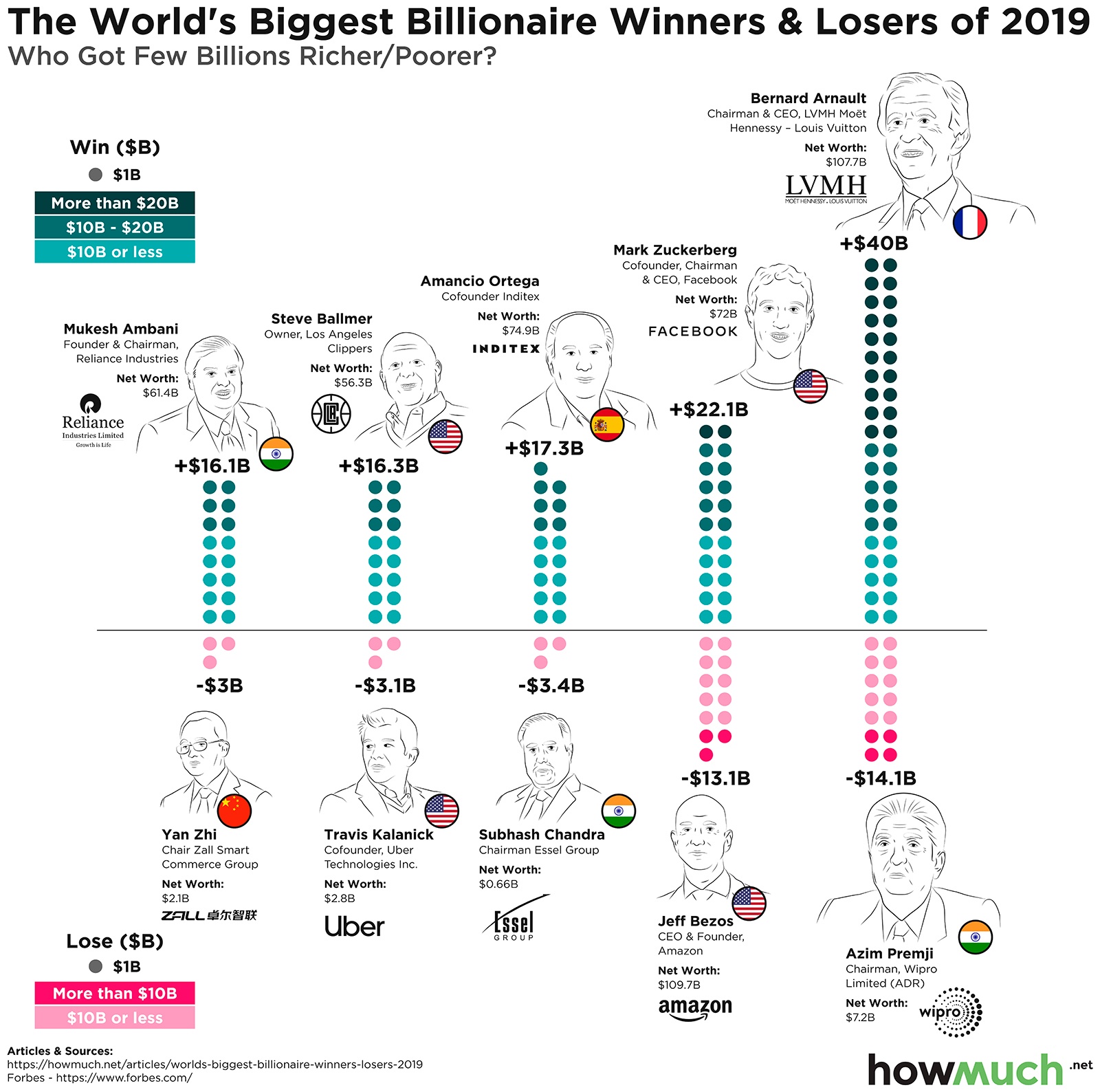 The information for this visualization comes from Forbes’ ranking of Biggest Billionaire Winners and Losers of 2019. In creating their list, the publication analyzed the net worth of more than 2,200 billionaires between December 28, 2018 and December 13, 2019. Only billionaires with investments in publicly traded companies were considered, and their wealth was measured in absolute dollars.

In the top half of the visualization, we show the five billionaire “winners” by increasing order of positive changes to net worth. In the bottom half, we show the five billionaire “losers” by increasing order of negative changes to net worth. Each dot in the visualization is equal to $1 billion, and the dots are color-colored in shades of turquoise or pink to indicate magnitude (the darker the color, the greater the amount of money gained or lost, respectively).

Forbes noted that stock performance was a major reason for the changes in wealth. Notably, LVMH stocks soared after the conglomerate’s acquisition of Tiffany & Co., and CEO Bernard Arnault briefly surpassed Jeff Bezos as the richest person in the world. By contrast, the ramifications of Uber’s disastrous IPO in May 2019 took a toll on the wealth of co-founder Travis Kalanick.

Other billionaires experienced changes in wealth for personal reasons. For example, Jeff Bezos of Amazon fame had experienced the biggest increase in net worth in 2018. However, an expensive divorce settlement caused his net worth to decrease significantly in 2019. In addition, Azim Premji donated $7.5 billion of his stake in Wipro to his charitable foundation, bucking the notion that a decrease in wealth is always a bad thing.

Did anything surprise you about this list? What do you think about the causes of these billionaires’ changes in wealth?  Let us know in the comments.