The discussion centers around central bankers and in Lebowitz’s opinion the bond bull market is not over,  The bankers have created exploding budget deficits and credit bubbles that will ensure a lot more inflation is on the way.

Individual investors are a fickle lot, and they’re notoriously bad at market timing. When markets are at their most expensive, melting up day after day into nosebleed-territory (like now), they can’t invest fast enough. Confidence reigns and it seems like the party will never end. During crashes, when incredible bargains abound, they panic and sell everything.
Then there’s margin. The peak of overconfidence. Paying interest to borrow money to invest in the stock market. And margin borrowing
There may be no better representation of the moral hazard created by interventionist monetary policy than the chart below. Ever since the “Greenspan put” came into existence just after the 1987 crash investors have embraced risk taking like never before and today’s it’s reached a new extreme. 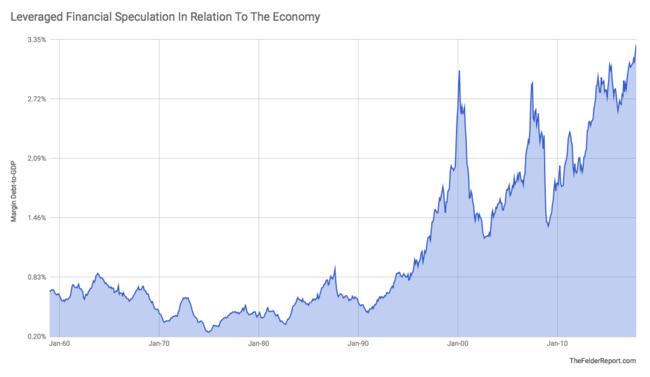 Margin reliably ramps at the very, very end of bubble bull markets. The dotcom crash, the 2008 crisis, and now…now whatever is about to trigger the coming crash. There is $600B in margin right now, the most ever, and when the market next crashes, so come the margin calls. Forced selling. Which triggers further margin calls. More forced selling. And so on and so on and so on. 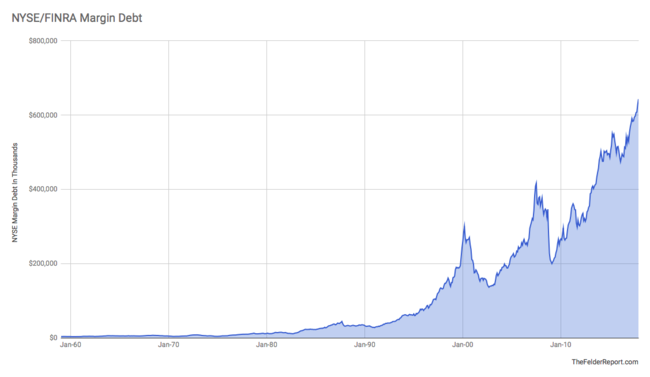 Even by the Fed’s bankrupt fantasy-world standards, this is a real eye-roller. We are reaching the point that any time the stock market falls, nearly at all, the Fed starts jabbering about the need to intervene and prop it up.
Forget about normalization, the Fed is terrified.
The Fed officially began Quantitative Tightening in October. To date, the Fed has shrunk its balance sheet by less than $40 billion. And already Fed officials are so spooked by stocks falling, that they’re promising more QE down the road… including an implicit purchasing of stocks.
To wit, on Friday, Boston Fed President Eric Rosengren stated the following:
“If LSAPs (read: QE used to buy debt instruments) are indeed not effective, then the Fed may need to take other measures”
Let’s be clear here… a major Fed official is implying the Fed should consider monetizing other assets, possibly even stocks… at a time when stocks are a mere 6% off ALL.TIME.HIGHS. 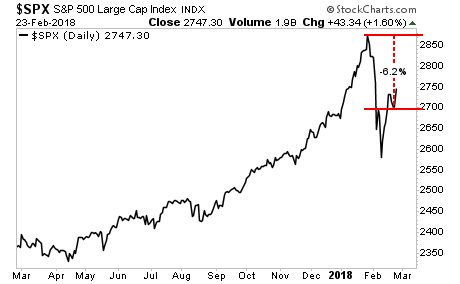 Clive Maund: “The Bell Has Been Rung on a New Bear Market”

The last time Clive Maund called the top on the broader stock market rally, it immediately fell 10%. And now he’s doing it again.
This is a very timely point to remind ourselves that when the market broke down and plunged a few weeks ago, it did so from a parabolic blowoff top, or as we had defined it, a 4-arc Fan Ascent, which amounts to the same thing for practical purposes, a top that was accompanied by all oscillators and indicators being at record overbought extremes.
While this top may not look all that extreme compared to something like Bitcoin, we should keep in mind that the broad US stock market is infinitely greater in magnitude than something like Bitcoin, and therefore vast amounts of capital are required to create any kind of parabolic blowoff. Given that there was a long lead in to this parabolic blowoff it means that the stock market is done – finished – and the bell has been rung on a new bear market. 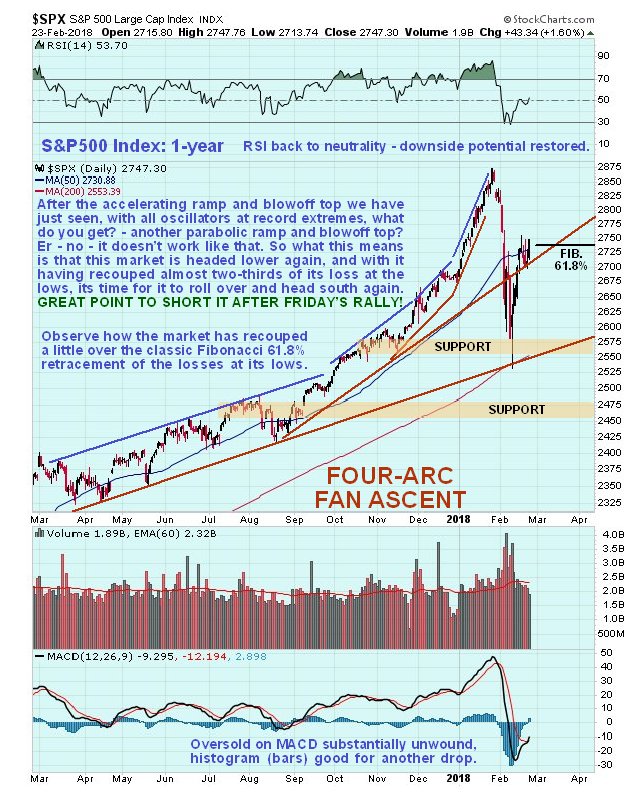 There is talk going around that the Fed “realized the error of its ways”, and would backtrack on QT (Quantitative Tightening) and resume QE and happy days would be here again. There’s only one problem with that argument, and it’s a big one, which is that if they try to resume that course in the face of gargantuan and fast-rising deficits, they will crash the dollar and send rates through the roof, causing the economy to implode anyway.
Going back to QE just won’t work and that means the jig is up on this bull market, which of course is what we would expect after a parabolic blowoff top.

The non-banks’ growth has been breathtaking. At the end of 2016, such unaffiliated mortgage companies accounted for more than 40 percent of new conventional mortgages (those eligible for sale to government-controlled guarantors Fannie Mae and Freddie Mac), twice the share they accounted for just eight years earlier. They’re also responsible for a decline in credit standards: The average FICO score at origination stood at 730 at the end of 2017, down from 750 five years earlier. For loans guaranteed by the Federal Housing Administration — an area where the non-banks’ share is greatest — the average FICO score has fallen to 680.