Since human wetware remains stuck in OS1.01, we can predict a remarkable reversal.

The “Everything Bubble” has been a sight to behold. With central banks providing trillions to the big players and margin debt enabling small punters to leverage up, the hot money rotation has been a real merry-go-round as one asset and sector after another is ignited by a massive flood of money seeking a quick return.

Once the hot sector has been slingshot to absurd heights, the hot money abandons it in favor of whatever hasn’t been shot into orbit.

Bat guano is the new Tesla–or maybe it’s Beanie Babies pulled out of attics, or sand. The sand index could be the next moonshot, who knows?

This new money adds momentum to the hot-money rotation, accelerating the moves and the gains. In other words, the easy money just keeps getting easier.

This feeds an irresistible compulsion to leverage up–to borrow money and throw it into the 100% guaranteed-to-rise market. Once debt has been maxxed out, then punters discover options and leveraged ETFs as avenues to increase the 100% guaranteed gains.

To chart this self-reinforcing momentum in sentiment and hot money, I’ve prepared this “Everything Bubble” Bubble-o-Meter. Clearly, we’re at the very top: there’s no fear except of missing out. Buy the dip has yielded 100% guaranteed returns, with the proviso that the more you”invest” (heh), the more you make, and the more leverage you take on, the greater your gains.

It’s worth recalling that the tsunami of central bank money–let’s call it $9 trillion–is less than 3% of total global financial wealth which is well north of $300 trillion. The core assumption of the “Everything Bubble” is that this 3% of newly printed cash can push the $340 trillion leviathan of global assets to new heights of everything: higher debt, higher leverage, and higher valuations.

The notion that this is akin to pushing on a string does not compute in the “Everything Bubble.”

Since human wetware remains stuck in OS1.01, we can predict a remarkable reversal from mortgaging the house to chase the hot-money trade of the moment to securing a place in the soup kitchen line. In the manic FOMO stage, no one ponders the idea that the mania could end rather more abruptly than expected; they only ponder how to increase the size of their current bet. 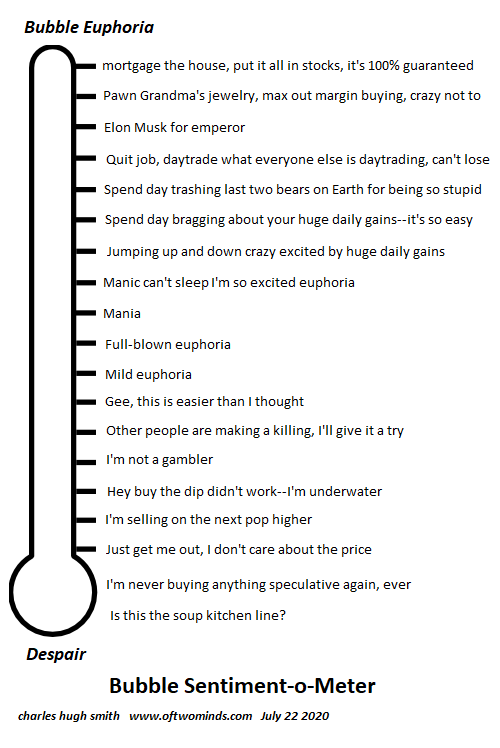