Global Yield Curve Has Inverted for 1st Time Since 2007 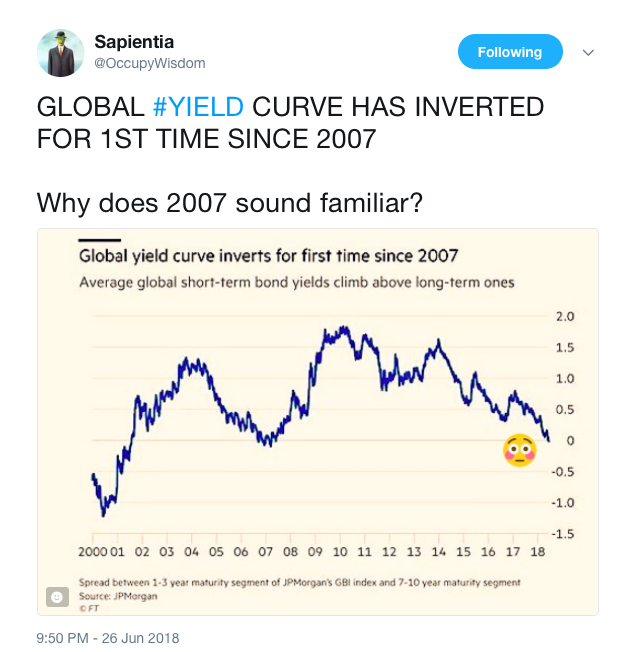 Dow transports could soon be in ‘jeopardy,’ and it could spell trouble for stocks, says trader

The Dow transports-tracking ETF (IYT) has fallen more than 3 percent in the last month, and TradingAnalysis.com founder Todd Gordon says there are troubling signs that it could fall below a key level.

“We’re seeing some underperformance in the transports relative to the broader market as a result of the escalating tension with trade tariffs with China,” he said Tuesday on CNBC’s “Trading Nation.” “I’d like to take this opportunity to be short IYT.”

The ‘weaponized’ yuan continues its collapse – back above 6.6 per USD for the first time since December and down 6% from the March highs.

[A] crash is coming, and it may be terrific. …. The vicious circle will get in full swing and the result will be a serious business depression. There may be a stampede for selling which will exceed anything that the Stock Exchange has ever witnessed. Wise are those investors who now get out of debt.

The above words could easily have been stated by me or another of the (very) few others who currently predict the coming of crashes in the markets.

But they were not. The statements above were made by investor Roger Babson at a speech at the Annual Business Conference in Massachusetts on 5th September, 1929.

Mr. Babson’s prediction was not a sudden one. In fact, he had been making the same prediction for the previous two years, although he, in September of 1929, felt the crash was much closer.

News of his speech reached Wall Street by mid-afternoon, causing the market to retreat about 3%. The sudden decline was named the “Babson Break.”

The reaction from business insiders was immediate. Rather than respond by saying, “Thanks for the warning—we’ll proceed cautiously,” Wall Street vilified him. The Chicago Tribune published numerous rebuffs from a host of economists and Wall Street leaders. Even Mr. Babson’s patriotism was taken into question for making so rash a projection. Noted economist Professor Irving Fisher stated emphatically, “There may be a recession in stock prices, but not anything in the nature of a crash.” He and many others repeatedly soothed investors, advising them that a resumption in the boom was imminent. Financier Bernard Baruch famously cabled Winston Churchill, “Financial storm definitely passed.” Even President Herbert Hoover assured Americans that the market was sound.

Today, most people have the general impression that on Black Friday, the market crashed and almost immediately, there were breadlines. Not so. In the Great Depression, as in any depression, the market collapsed in stages. The market did not reach its bottom of 89% losses until July of 1932.