How can you be convicted of two different degrees of murder and also manslaughter?  How many murder cases can you think of that tacks on manslaughter at the same time?

Politicians, media and the mob outside the court house decided the verdict. Why anyone would want to be a police officer is beyond me.

To begin with, the police already kill more white people than black people, but that’s normal since America is (not for long) a majority white country; the problem that never gets addressed in mainstream/legacy media (including cucked so-called conservative websites) is black crime.

Black crime is off the charts, and since blacks have a natural tendency to resist arrest and interact with the police more often, they end up killed in massive numbers, if you take into account they are a tiny minority in America.

It’s that classic “13% does 52%”meme, i.e. more than half of murders/violent crimes (it gets even worse if you take into account rapes, burglaries, hate crimes etc.) in the US are perpetrated by blacks, according to FBI crime stats.

Go check out Vincent James (Red Elephants guy) on Bitchute or Trovo, he does a great job explaining this.

Moving on to our story, here’s CNN host Chris Cuomo:

During a bizarre rant on Friday, the brother of the NY governor appeared to call on police to start killing white people’s kids. He said, and this is an actual quote:

“George Floyd, Daunte Wright, I wonder if you’ll remember their names six months from today because there’ll be replaced by so many others.

“Those start piling up, ‘What is going on with these police? Oh, what? Maybe we shouldn’t even have police!’ That kind of mania, that kind of madness, that’ll be you. That’ll be the majority because it’s your people.”

His choice of words is, let’s say, confusing at least. One may be inclined to believe Chris is encouraging police to start murdering whites, because according to his worldview, this is the only way to get whites on board with abolishing the police, which is a good thing apparently.

Many black people, including garden variety BLM types, seem to be cool with abolishing police:

Most probably, the people running the country are going to keep reducing policing, and allow blacks to kill whites with minimal consequences. Here’s something to cook your noodle:

JUST IN – Officer-involved shooting in Burnsville, #Minnesota. Shots fired. The suspect is down.pic.twitter.com/7SWEeoJSXk

Person pursued by police jumps out of moving car, appears to point a gun at another car on Highway 13 at I-35W in Burnsville. Runs into grass median and goes down. Working on details. Hwy 13 closed both directions. #BREAKING @kare11 pic.twitter.com/B0GUgUunAT

There’s amazing helicopter footage, and I strongly advise you to watch the whole thing.

Here’s what happened: a guy stole a car over the weekend in Minnesota, was chased by police, a gun fight ensued as the perp started shooting out the back window at police cars, then he ditched the car, tried to commandeer a new car as he ran onto the highway pointing the gun at the first vehicle that passed by, etc.

It was like a scene from a movie. Obviously, the police did their job and the perp ended up shot and killed on the spot.

What’s really amazing is that a bunch of white people, mostly women and millennials, organized a rally for the dead perp, and they even kneeled on the road, in a moment of silence.

Protestors kneel after hearing there was an officer-involved shooting in Burnsville moments ago. This information HAS NOT been confirmed but this group says they're heading there. pic.twitter.com/MHdQQmytnY

And here’s the kicker: they were prepared to march to the scene of the shooting, but then decided not to.

The march was cancelled when they found out the perp was white, not black.

I apologize. I thought they stopped protesting in Burnsville because the suspect was a carjacker.

They stopped protesting because the suspect, who was shot, was white and that screws with the entire narrative. t.co/kOYcvx2L0u

There are many people (including a lot of cucked whites) who argue that police shooting back if a black perp opens fire or tries to hurt them (or random civilians) is a bad thing.

If the shooter had been black, they would have gone ahead with the march, claiming that even if blacks commit violent crimes, they should not be punished.

The new thinking is this: somehow the existence of cops causes black people to do crimes.

That is literally what they are now arguing. And there’s no logic behind this argument.

The truth is that police have almost completely backed off of policing blacks. There are places in California and Illinois that literally stopped enforcing the law of the land, and the consequence is that blacks are now killing each other at insane levels, and no one is trying to stop them.

But, when blacks start getting involved with white people, stealing their cars, pointing guns at them, whatever, the police still think they’re supposed to do something to stop them. And many leftists disagree with that. Basically, they are calling for stop policing altogether.

It wasn't an accident. Policing in our country is inherently & intentionally racist.

Daunte Wright was met with aggression & violence. I am done with those who condone government funded murder.

No more policing, incarceration, and militarization. It can't be reformed.

This is a sitting congress person (/s) saying that police should be abolished and the prisons opened up. Obviously, the goal of all these anti-police movements is to attack white people.

Of course, if whites fight back – well, there will still be police to stop them from doing that.

This is not satire, but a real headline from a month ago in The Guardian: 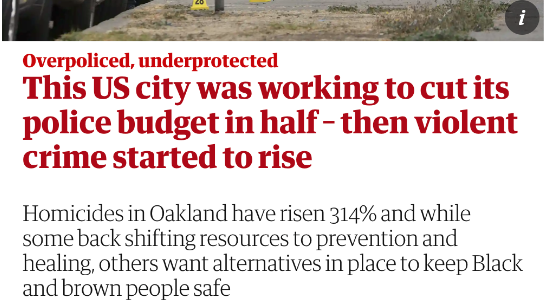