Oil prices have held firm in recent weeks on the understanding that Saudi Arabia was willing to at least extend the current production quota through June 2020.

In light of the ongoing Aramco IPO process, Saudi Arabia’s highest priority has been to keep oil prices steady around $60 per barrel. The Kingdom, however, is facing some resistance from other members of the oil cartel ahead of its next meeting.

Riyadh’s largest partner in the OPEC+ production cut deal, Russia, has been far less compliantand less vocal about rolling over the current production cuts. Russian oil majors have thus far been slow to respond to Moscow’s mandate to cut oil production and, as a result, the country continues to overproduce. Russian oil CEOs Igor Sechin and Vagit Alekperov even expectOPEC to delay a decision about extending oil production to March 2020.

According to data from the Russian Energy Ministry, its drillers pumped 11.244 million bpd between November 1 and 26, exceeding their quota by 54,000 bpd. Bloomberg estimates that Russia hasn’t fully complied with the deal for 8 months in a row.

And Russia isn’t the only country that hasn’t been fully compliant. The below chart from Bloomberg shows that several OPEC and Non-OPEC nations have failed to adhere to the production agreement. 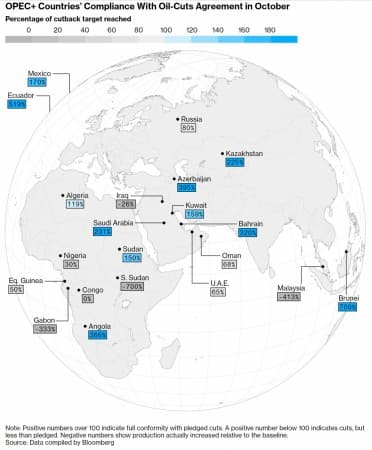 Saudi Arabia, as usual, continues to overdeliver and is growing increasingly impatient with its fellow OPEC and non-OPEC partners. Saudi Arabia’s new oil minister, Prince Abdulaziz bin Salman, is expected to crack down on rogue producers within the cartel. Oil markets should expect a shift in Saudi attitude in the upcoming OPEC meeting as Prince Abdulaziz seems willing to break with his predecessor’s policies.

If OPEC fails to comfort the markets at its upcoming meeting, a deja-vu of Christmas 2018 could be in the making, and today’s price plunge could just be the prelude to a significant correction in crude.

By Tom Kool of Oilprice.com