Israel is the bully. We all should take this very seriously. I’m tired of the the U.S being the employee as Israel remains the company. We succeeded from Britian, won ww1, won ww2 to have been taken over by a foreign power without one shot fired. They literally own us. They point their finger and we do it.

Israel’s military carried out strikes against Iranian targets in Syria after it said Iranian forces based there fired rockets at its soldiers in the Golan Heights, raising the risk of a wider regional war just a day after President Donald Trumpwithdrew the U.S. from the international nuclear deal with Tehran.

Iran’s attack in the Golan appears to be the first time Iran has opened fire from Syria on Israeli targets. The Israeli military said dozens of Iranian military sites across southern and central Syria were struck. The… 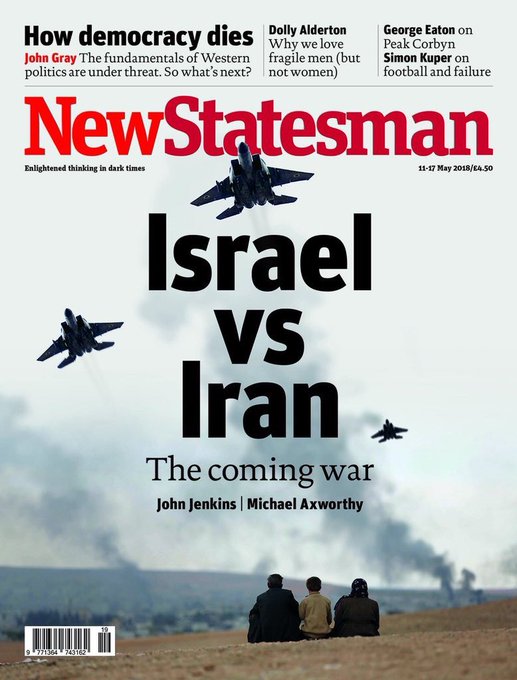 Israel and syria are at war right now (updates)

● Israeli Army Spokesman: About 20 projectiles were fired by the Iranian Qods Force at Israel’s forward defensive line in the Golan Heights. Missile defense systems carried out several interceptions. No injuries.

● IDF Spokesperson: We see this as an Iranian attack and are treating it seriously.

● Military airports, weapons depots, missile defense systems and radars among some of the targets said to have been destroyed by Israeli forces tonight in Syria. Number of casualties unknown. Now awaits if Iran will further choose to respond.

● More than 50 targets were struck in Syria by the IDF – it is one of the largest air force operations done in recent years.

● Video of projectiles being launched from Syria toward Israeli targets moments ago. Sirens have sounded in the Golan Heights. Explosions also heard in the Golan region in the past few minutes.

● First footage of explosions hitting Israeli positions in Golan. Warning sirens are active and civilians have been instructed to go to bomb shelters.

● Incredible footage of a possible missile interception over the skies of Damascus.

● First footage of new round of Syrian rocket launches against Israeli held Golan in response to Israel’s strikes on Syria.

● Photos from Damascus tonight. Mostly quite now after 4 straight hours of Israeli bombing Iranian infrastructure in Syria on an unprecedented scale. Sunrise soon.

● SAA or IRGC, used static single-use MRLS, Israel targeted them after the fired but the other side lost nothing

● Reports of more Israeli strikes on Hadar in Qunaitra

● SANA: AA units are actively firing upon a fresh wave of Israeli missiles over Syria.

READ  THINGS THE MAINSTREAM PRESS WOULD SAY BEFORE THE ELECTION THAT IT WON’T SAY NOW:

● Patriot missile launched near Safed in the Upper Galilee

● Mezzeh airbase has been reportedly hit by an Israeli rocket

● Reports that the Israelis have start launching Patriot missiles, because the Iron Dome has failed to shoot down Syrian missiles.

● IDF spokesperson says Israel is currently taking action against Iranian targets within Syria, any attempt by the Assad regime to interfere with the operations will be confronted with severity.

Déjà Vu: Trump already warned us back in 2013 that war hawk assholes will scam Americans into war to die for Israel And just like that, Israel has reason to attack Iran after months of attacking them for no reason other than provoke a response.