By the mid 1930s, a large portion of the world was still suffering from the aftereffects of the Great Depression. In America, the recovery was still brutally slow, with almost a fifth of the population still out of work. Much of Europe was in worse economic shape than the US, and political unrest had grown into quite the monstrosity. The Communist Party’s revolution was thriving in Russia, Hitler and the Nazis were galvanizing the Germans after they were devastated by hyperinflation and WWI reparations, and Mussolini had risen to the top of Italy’s political system in yet another populist uprising. In Asia, China and Japan’s tensions had already boiled over into a war. Needless to say, the world was rapidly becoming a very crazy place. Does this remind you of any other time period?

History may not perfectly repeat, but it does rhyme. Many economists, historians and investors would agree that the Great Recession of ’08-’09 was the largest economic downturn since the Great Depression. Once the world discovered what the banking industry had been up to with subprime mortgages, perception and reality came crashing into each other and markets came crashing down. People lost jobs, houses and life savings. The fallout from this economic disaster led to a mood of unrest that still permeates society today.

No, there were no breadlines after the 2008 collapse. But like I said, history doesn’t repeat, it rhymes. Who needs breadlines when you have swipeable food stamp cards? Just because the lines weren’t visible doesn’t mean people weren’t in desperate need of assistance after the crash. The number of individuals receiving food stamps rose dramatically after the recession and reached an all-time high of 47.6 million in 2013. It has barely come down since its peak, showing just how inadequate this recovery has been. 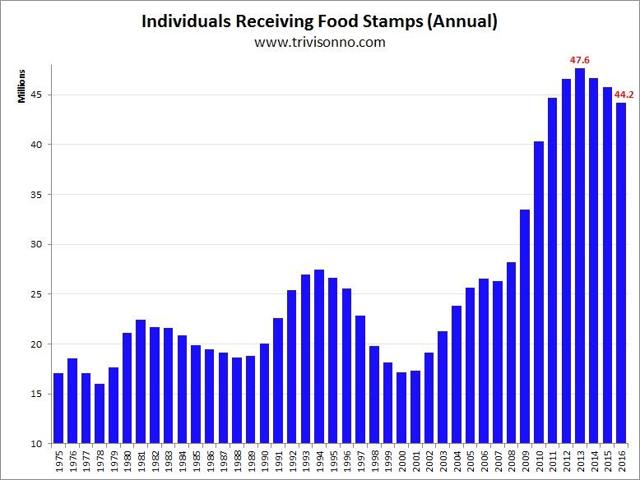 How could this recovery be so bad, especially with a rock-bottom unemployment rate? It turns out that in 1994 the Bureau of Labor Statistics decided to remove “discouraged workers” (i.e. workers who have given up looking for work) from their calculations. When examining the current unemployment rate combined with the missing variable of “discouraged workers”, we get a rate that is much closer to the rates of the mid 1930s: 21.7% as of November 2017. 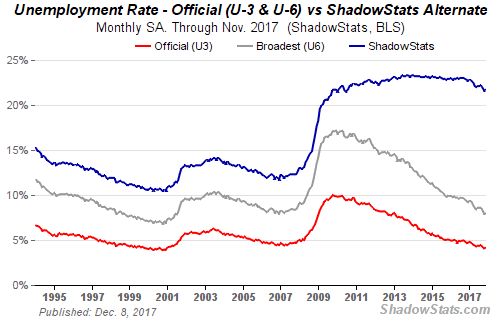 When economic growth is this lackluster, interest rates must fall to encourage more borrowing – something that then facilitates economic growth (in theory). The 1930s and 2010s have both been accompanied by near 0% short-term interest rates to compensate for the painfully slow recoveries. Even the highest paid economists don’t know how to get growth back to their desired levels. 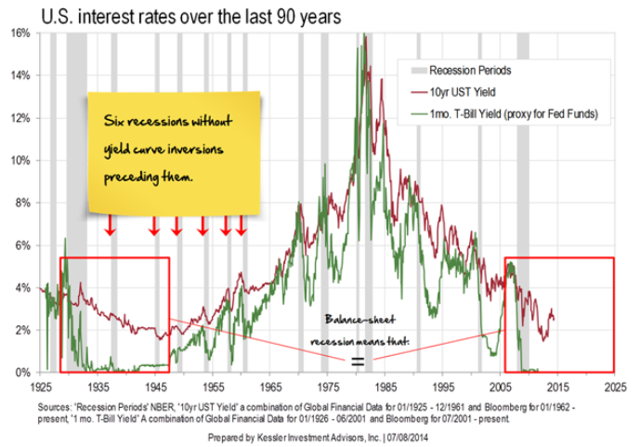 Notice that Kessler Investment Advisors points out 6 cases after the Great Depression where the yield curve did not invert before a recession. Over the past several decades, the yield curve has inverted (gone below zero) before each recession. However, when there is so much downward pressure on short-term rates due to slow economic growth – like after the Great Depression – the yield curve stops inverting. To learn more about why this metric may not indicate the next recession, you can read an article I wrote about it here. 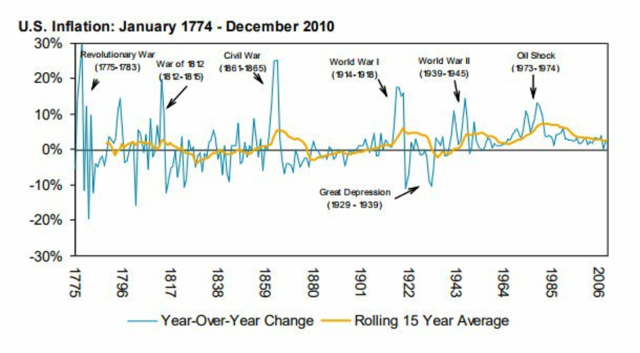 (Note: I’m not exactly sure where this chart came from, but I first saw it posted by an asset manager on Twitter, @HayekAndKeynes)

A social phenomenon that arises from the common man being fed up with 1) wealth and opportunity gaps, 2) perceived cultural threats from those with different values in the country and from outsiders, 3) the “establishment elites” in positions of power, and 4) government not working effectively for them.

In his 61-page report, Dalio provides a chart that shows the level of populism in the developed world over the past 100+ years. No other two periods have shown higher levels of it than the 1930s and 2010s.

In an essay posted to LinkedIn, Ray Dalio summed up his views on the current situation by stating:

It seems to me that we are now economically and socially divided and burdened in ways that are broadly analogous to 1937. During such times conflicts (both internal and external) increase, populism emerges, democracies are threatened and wars can occur. I can’t say how bad this time around will get. I’m watching how conflict is being handled as a guide, and I’m not encouraged.

Populism is on the rise throughout the Western world. The political divide in the United States grows more intense by the day. In Europe, mass migration has sparked outrage and countries are beginning to pull apart. With the United States’ waning power, other powerful nations (i.e. China and Russia) seem more willing to exert more influence in the world. North Korea seems like an accident waiting to happen. The Middle East has become immensely more volatile this decade. The world seems to be on the verge of something massive. 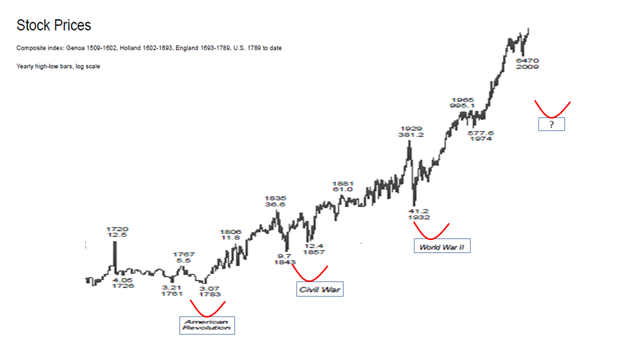 If we take a closer look at the last time one of these rare events occurred, we can see that the chaos started with a large market selloff in the Dow (DIA) and many other of the world’s major indexes. This was the crash of 1937. The crash likely intensified the political situation as moods soured due to an immediate loss of wealth. It was another slap in the face while people were still reeling from the Great Depression. Then things got really ugly in 1939 with the start of WWII. The market rolled over again and continued its decline until the end of the war. As you can see from the chart below, the total market decline during the late 1930s and early 1940s was almost equal to that of 2008-09. It also took a lot longer to complete the cycle. In other words, it would have been a miserable time to be holding stocks. 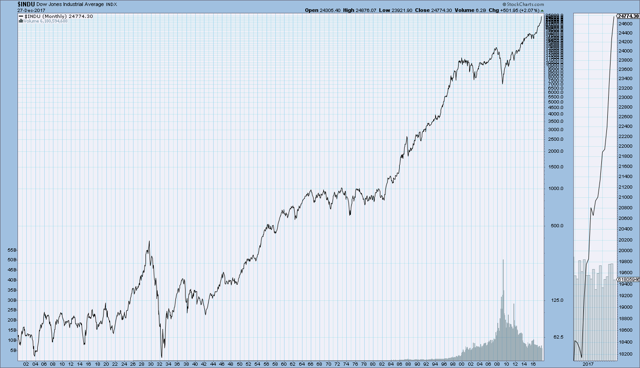 Today’s economic and political conditions are similar to those of 1937 – a time right before the market crash that kicked off WWII. No, I’m not telling you to sell all your stocks and bury the money in the backyard. However, it’s in your best interest to know the potential risks out there. In my opinion, this is the greatest risk that is the most overlooked. It’s uncomfortable to think about such horrendous situations, but history is rife with them. It’s important to take all risks into account in order to manage your portfolio properly.