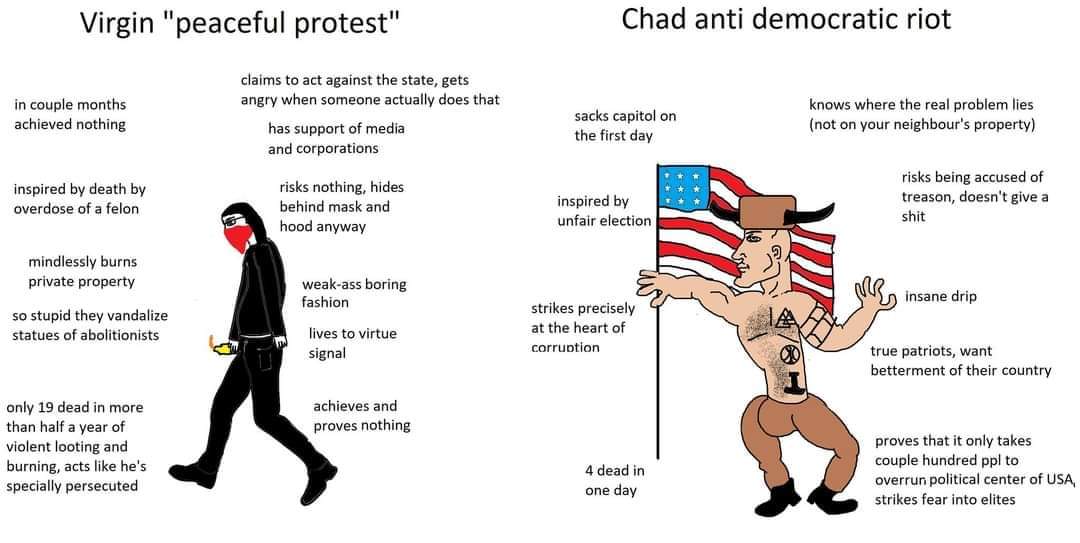 You Qanon dumbasses can finally shut the fuck up maybe.

I hate to say “I told you so”, but I told you so back in December 15th. Here’s Trump’s terrible statement from last night, a cowardly public-surrender statement if it ever was one:

This is almost unbelievable; I can’t imagine how Trump fans are feeling right now. What even is this, a deep fake?

Don’t forget: it was Trump who incited the Capitol riot, and as I told you in my yesterday piece, if you were inside that building, you must head to Mexico right now; the Biden regime will punish you to the full extent of the law and you’re going to do time in a federal prison.

Maybe I don’t get it, watch the video for yourself, but it certainly looks like Trump is conceding, and voluntarily transfers power to Biden, plus, it very clearly condemns his own supporters as criminals for doing what he basically told them to do.

Sorry Mr. Trump, there was no violence from your supporters yesterday. Speaking of rioting, when you riot, isn’t there usually tons of damage with people smashing everything and general lawlessness?

The cops usually don’t take down barricades and move people along like they are going on a theme park ride during a riot.

THE TRUTH IS IN THIS VIDEO. WATCH AT 9 MINUTES WHERE THE BARRIERS WERE LIFTED AND PEOPLE WERE CALMLY WALKED INTO THE CAPITOL.

We don’t support political violence in any way, shape or form, and it doesn’t mean that if BLM can burn the whole city down and get applauded by Democrats and mass media, Trump supporters can storm the capitol and break things.

But, it was the Capitol police that fired tear gas into a crowd just trying to make their voices heard. People asking the cops to stand up for their constitutional duty were maced in the face.

But, there were paid and planted provocateurs  (antifa/BLM types) who tried to smash windows and break down doors, but Trump supporters stopped them.

Then people were allowed to enter the Capitol and were escorted by the police. These “terrorists” stopped to thank the police and took selfies with them.

FOR CONDEMNING THIS, YOU LOSE ALL THE RESPECT THAT YOU HAD. AN UNARMED WOMAN WAS SHOT DEAD.

TRUMP IS DONE. HE SHOULD NO LONGER GET ANY SUPPORT. HE DESERVES NONE. EVERYONE IN DC IS COMPLICIT IN THE DESTRUCTION OF THE UNITED STATES OF AMERICA.

Sorry if you still believe in Trump. Instead of taking a stand, he has folded like every other worthless sack of shit that has held office.

Yesterday marked the official death of The United States of America.

But maybe it’s some secret plan. Maybe patriots are in control. Maybe he’s going to seize power at the last moment. I suppose if he was planning to do that, this is what he would do.

Bottom line: Trump took over from a deranged sociopath and he will be succeeded by another deranged sociopath, and in the meantime, NOTHING REALLY CHANGED under Trump:  the rich got richer, more money was printed, government got bigger, interest rates are back at ZIRP, government spending is off the charts, civil liberties got fewer, deficits got bigger, and debt level has skyrocketed.

This is how ‘well’ Trump’s 3-D chess strategy and Trust The Plan has worked.

The only good thing Trump ever did while in office was that he red pilled American about mainstream media and Big Tech colluding against them (though he did squat to mitigate the problem), and, most importantly, he did not start any new wars; he even tried (and failed) to bring the troops back home.

That’s actually more than Obama or Bush ever did, so yeah, kudos to him for that.