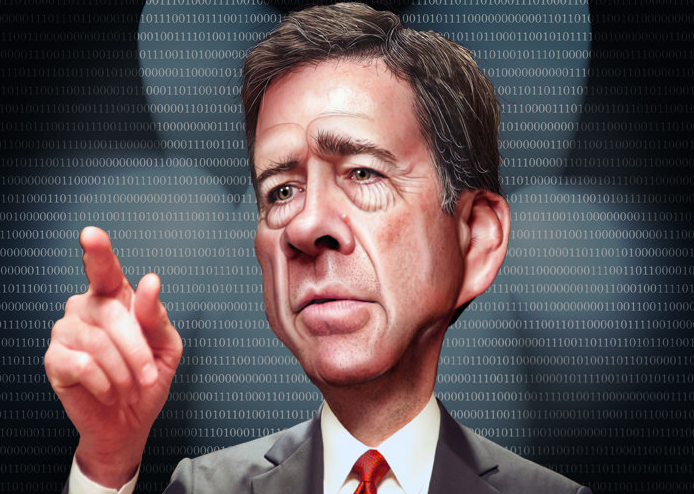 Former FBI director James Comey, who is described by many pundits on the right as the dirtiest cop in America, is currently in the midst of a huge tour, promoting his upcoming book, which is going to be published next Tuesday. The title of the book is very funny, considering the author: “No Higher Loyalty”. In that book, and in multiple media-interviews that he’s giving (the first one was to George Stephanopoulos on ABC) to various MSM outlets these days, former FBI director Comey is slandering the POTUS in a big way. What I find interesting is that his first major interview was made to a Hillary Clinton hack, Stephanopoulos that is, a guy who actually worked for the Clintons as their press secretary during the 90s. And this proves it’s all being carefully coordinated.

As Comey now goes on the offensive, here are his main allegations from his book/his media interviews: numero uno, he compares Trump to a mob boss, more precisely Sammy the Bull Gravano. If you were wondering what’s up with that strange name, Sammy was an underboss of the Gambino mafiosi, a top henchmen for a major crime family, before he became an informant and flipped on Gotti and the 5 families of New York. Now, Comey claims he met with the POTUS on multiple occasions, and Trump asked for a loyalty test from James Comey (as he was the FBI director), a behavior Comey  describes it to be similar to a mob boss like Sammy the Bull. Everything with Trump (according to Comey) is about ascent, is about taking orders, is about being loyal, is about putting the interest of the Trump organization and the Trump “machine” over that of the country, morality and truth. As Comey put it, Trump is acting like a modern day mob boss.

Furthermore, Comey says that the POTUS was obsessed with the Steele so-called dossier, in particular the allegations about a recording/tape that the FSB (former KGB) had of the POTUS in the Ritz-Carlton hotel in Moscow, in which according to the dossier, Russian prostitutes were urinating all over Trump and all over the bed in 2013. So, Trump was obsessed with this alleged tape, and he asked Comey to find out who was behind it, and to go and debunk it, or something along these lines.

According to Comey, Trump felt it was a 1% chance that Melania Trump would believe the accusations, so he was playing the sympathy card so to speak, i.e. he was trying to protect his beautiful wife from something potentially hurtful to her. You see where this is going, Trump was using his wife as a pretext to convince Comey to bury/disprove the Steele-tape/dossier or whatever. At least that’s what the former FBI director alleges. As Comey told Stephanopoulos, what kind of a man/husband and what kind of marriage do they have if Melania would think that’s even one percent chance for his husband getting golden showers from Russian prostitutes in a hotel in Moscow. As Comey brags, his own wife would never give any credence/validity to those sort of rumors/allegations, so his marriage is so much better, ‘cause he’s the perfect husband, family man and loyal and the whole nine yards.

Stephanopoulos asks him: but is it true? (the Steele dossier/tape). Comey responds “wisely”: it hasn’t been verified, it’s unverifiable, it’s possible (wink-wink). Basically, it’s Trump we’re talking about, a guy who bangs porn stars, hence the piss-gate story is totally plausible, right? There are other odd aspects to Comey’s book. One of them is Comey’s obsession with Trump’s appearance/looks. He goes on and on about how Trump was shorter in person (when they first met) than he believed him to be after seeing the POTUS on TV. Comey is 6ft 8, Trump is 6ft 3 by the way. Also he seems particularly interested about Trump’s bright blond and perfectly coiffed hair, which looks (Comey’s words) like the POTUS spends hours in the morning getting ready. He talks about half white moons under Trump’s eyes, which are due to tanning goggles. In a very bizarre twist, he also says he noticed Trump’s small hands, smaller than his respectively, yet not unusually small. This is a clear shot at the POTUS’ manhood, if you follow that school of taught about hand size being correlated with one’s… you know what I am talking about. And yes, Comey’s hands are bigger than Trump’s, yes siree Bob.

This is sickening, this is cheap gossip and innuendo, this is nothing more than a vicious smear and slander campaign by a clearly bitter and nutty man, who so loathes the POTUS that he’s essentially turning his book into another version of the National Enquirer. This is all about sex, Russian prostitutes, golden showers and sticking it to the POTUS whilst hurting his family in the process. During the interview on ABC , Comey basically says that Trump is in bed with Putin and he’s trying to cover up for the Russians. This guy is totally unhinged. He doesn’t state it loud and clear, but he insinuates it, because that’s the kind of sleazeball Comey is. What this guy and  Stephanopoulos did was their version of a political golden shower on the POTUS, there’s no way around it. Trump responded to this interview via Twitter this morning, calling Comey an untrustworthy slime ball who should be prosecuted because he lied under oath (he lied to Congress) and leaked (by his own admission) classified intel to the media via his friend in order to trigger the special counsel of his good buddy Robert Mueller.

Now, if you have an IQ over 85, you should ask yourself how come the White House is leaking like a sieve if Trump is running his presidency like a mafia-crime-family  boss, as per Comey’s ramblings? How come Trump surrounds himself with people he disagrees with if he’s such an authoritarian? Also, Trump armed Ukraine with lethal defensive weapons. Putin has been screaming bloody murder.  Trump has now unleashed America’s oil and energy production, killing the Russian energy market, which is Putin’s life-line. And we’re currently on the verge of the greatest possible nuclear confrontation between us and Russia since the Cuban missile crisis, and I am talking about the Syria situation, which could easily turn into a hot war, i.e. WW3. If Putin had a secret tape of Trump being urinated on by Russian hookers, you don’t think he would have released it by now?

If Putin releases that tape, Trump’s presidency is over. You know why Putin hasn’t released that tape? Because it’s complete bullshit, and Comey knows it. Christopher Steele lied, the FBI lied, and now Comey is (on record) one of the biggest liars and dirtiest cops in American history. Forget the book tour, he belongs in jail.

Here’s from the interview: