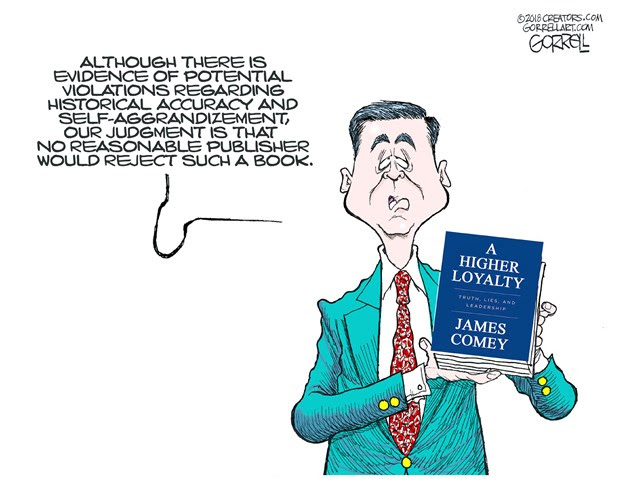 The following translations of Comey’s statements are offered by a professional skeptic after hearing Ex-FBI Director James Comey’s answers to George Stephanopoulis’s questions that aired on ABC on April 15, 2018.  You can read the entire transcript of the interview here:

GEORGE STEPHANOPOULOS: Well, you make the decision to make a public statement– July 5th. Take us inside your head. Tell us what you were thinking.

JAMES COMEY: Yeah, my goal was to try to offer as much transparency as I could, consistent with the law and policy, to the American people, with the goal of convincing them, first of all, that we’re not on anybody’s side. We’re not on the Democrat side or the Republican side. That we did this in a competent way, an honest way, an independent way.

And there’s no there, there. That no reasonable prosecutor would prosecute this case. And you can rely upon that ’cause we did this well and in an apolitical way. And so we crafted a statement that we worked on endlessly to get it right. And I decided that I would read it, say it out loud, so that people could hear the tone in my voice. But that I wouldn’t take any questions. And that was the goal, to give a report to the American people and then step away from it.

Translation:  I and other leaders at the FBI and the DOJ were anything but transparent.  I would be lying if I said otherwise.  That simply is not the nature of how a cover-up works, especially one of this magnitude.  I had over a hundred FBI agents working on the Clinton matter, but unbeknownst to them, it was all a charade.  It was a foregone conclusion that Clinton would be exonerated.  It would have been political malpractice for me to do otherwise.  It’s easy to criticize me at this point for taking sides, but I challenge anyone in my shoes to have done anything other than exonerate Clinton, who was on a glide path to becoming the next president of U.S. at the time.  As for the agents who found boatloads of criminality by Clinton, they were paid well for their work at the expense of taxpayers even though many of them considered my exoneration of Clinton to be a slap in the face.  They are professionals and will get over it.

GEORGE STEPHANOPOULOS: You even thought about the tie you’d wear that day?

JAMES COMEY: I did. We’re in such– we’re still in such a vicious partisan time. I don’t know whether folks notice this, but in Washington Democrats tend to wear blue– men tend to wear blue ties. Republicans tend to wear red ties. And so I chose a gold tie that morning ’cause I didn’t want to wear either of the normal gang colors.

Which seems crazy that I have to think about that, but given the times we were operating in and we’re still in, I was hoping the American people would see us as apart from this craziness. That these are people I can trust. And part of that was not just the way I dressed. But by offering them a lot of information. Sh– let me show you my work so you can understand we did this in the way you would want us to do it.

Translation: Thanks for that question.  The gold tie was a stroke of genius of my part.  Most Americans are shallow and can be counted upon to judge a book by its cover.  Neither blue nor red would give the appearance of being neutral and fair-minded, which exactly is what a well-orchestrated cover-up requires.  I must admit that the gold tie was pitch-perfect on my part.

GEORGE STEPHANOPOULOS: Your critics say you offered way too much information. The way they put it, “Listen, in the F.B.I. we simply do not bloody up people we choose not to prosecute.”

JAMES COMEY: Yeah, and I get that. Look, that’s fair criticism. But here– here’s my response to it. The Department of Justice has long done that in the appropriate case, where it’s necessary to the credibility of the work. There was controversy for the first couple years of my time as director over whether the IRS had targeted Tea Party groups.

And the Department of Justice and the F.B.I. did a criminal investigation and in a detailed report that was public as to what we had done– the department did this, they criticized people but said no criminal case was warranted. This is just consistent with that practice. What I’d ask those people is would the work really have been credible if I wasn’t honest? That– that Hillary Clinton’s c– conduct on that personal email server was extremely careless. It just was. And if I wasn’t honest about that, how am I achieving the goal of showing the American people this is your justice system working in the right way?

Translation: Now that you mention it, the IRS did indeed target conservative groups, including the Tea Party.  In fact, Lois Lerner took the Fifth Amendment in order to avoid incriminating herself and, as our investigation revealed, she was wise to do so.  Just like the Clinton case, it would have been political suicide to press charges against Lois Lerner and other leaders inside the IRS.  Obviously, Lerner was a political operative working for the Obama administration and that made her untouchable as anyone with a strong sense of self-preservation can attest.  The Lois Lerner case turned out to be a dry run for the Clinton case.  The outcome of both cases was a fait accompli; i.e., no criminal charges would be brought against either of them.

As far as my criticism of Clinton is concerned, it would not have been a credible cover-up to simply exonerate her without addressing her handling of classified emails on her private server.  Most of the information regarding the private server and the destruction of her emails had already been reported in the press and was widely known to public, therefore, it had to be dealt with.  That’s why I had prepared a draft of the exoneration months before Clinton and other key witnesses were interviewed.  The interviews themselves didn’t mean anything to me at that point, but the exoneration statement meant a whole lot.  As I indicated previously, the decision to clear Clinton was decided as soon as the FBI began its investigation into the Clinton matter.  It was a complete farce, but the public was unaware of it.  Not only was her handling of classified information careless, it was criminally negligent.  Even the village idiot knows that.

But the bigger crime was Clinton’s willful destruction of subpoenaed evidence.  If you notice, I studiously avoided mentioning that fact in my exoneration speech because there was no way to spin it away other to acknowledge that Clinton obstructed justice.  Secretary Clinton and her associates failed to preserve subpoenaed files and records, all of which are considered official government records; instead, they deliberately destroyed approximately 30,000 emails, claiming the files were personal and unrelated to government business.  It took courage and a lot of hutzpah for me to turn a blind eye to the destruction of evidence by Secretary Clinton and her associates.  It is impossible to characterize the use of bit-bleach cleansing and hammer blows to portable devices in order to obliterate subpoenaed evidence as anything but a violent breach and obstruction of justice.  But I did what I had to do in order to keep my job as the Director of the FBI and I am proud to have pulled it off the way I did.

GEORGE STEPHANOPOULOS: Y– you– you cited her for extreme carelessness. In an original draft of your statement– the words, “Gross negligence” were there instead of “Extreme carelessness.” And– and President Trump’s allies say that’s a sign that you personally went easy on her.

JAMES COMEY: Yeah, I don’t. All these allies who think I went easy on her have a hard time explaining so why did I do what I did in October, but I’ll stay in July. I wasn’t trying to go easy on her or hard on her. I was trying to be honest and clear with the American people. What she did was really sloppy.

Not– you know, there’s all the time people mishandle a classified document or maybe have one conversation on email that they shouldn’t. This was over the course of four years, dozens of conversations on email about secret topics. And I think eight about top secret topics. So this is more than just ordinary sloppiness.

So if I’m going to be honest, I have to say somehow it’s more than ordinary sloppiness. So my first draft, which I wrote myself, said, “Gross negligence.” It’s a lawyer term. And the reason I used that term is I wanted to also explain that I don’t mean that in the sense that a statute passed 100 years ago means it. And then my staff convinced me that that’s just going to confuse all kinds of people, if you start talking about statutes and what the words mean. What’s a colloquial way to explain it? And elsewhere in my statement I had said, “Extremely careless.” And so they said, “Just use that.” And so that’s what I went with.

Translation: I hope FBI rank-and-file agents will forgive me for rendering the fruits of their hard work unrecognizable and for drawing a conclusion that is unsupported by the blizzard of incriminating evidence they uncovered.  Fortunately, our agents know that there is a political component to their work and that it is necessary at times to gloss over inconvenient facts.  They also understand that certain powerful politicians must be afforded a wide degree of latitude in the application of the law.  In other words, hard evidence alone is insufficient when dealing with the politicians who run our government.  The concept of equal justice under the law is malleable in this regard.  Hence, I trust that FBI agents, in their professional wisdom, will abide the delicate elasticity I applied to the Clinton matter.

Almost any prosecutor who can fog a mirror would bring charges in this case based on the overwhelming evidence uncovered by FBI investigators, but that prosecutor would be politically tone-deaf if he did so.

Although there are a number of individuals that have been charged, convicted and incarcerated for much less, those individuals did not have Secretary Clinton’s political power and connections.  It’s that simple.  Extenuating circumstances dictated that Secretary Clinton be absolved of any wrongdoing that could possibly have legal consequences.  To do otherwise would have been tantamount to political malpractice on my part.  I have no regrets.  And would do exactly the same thing if I had to do it over again.

As it turned out, Hillary Clinton and I have a lot in common.  At the end of the day, our government service made us very wealthy, an American dream come true.

For Part 1 of the professional skeptic’s translation of the Comey interview please see:  www.investmentwatchblog.com/a-skeptics-translation-of-statements-that-james-comey-made-during-his-abc-interview/