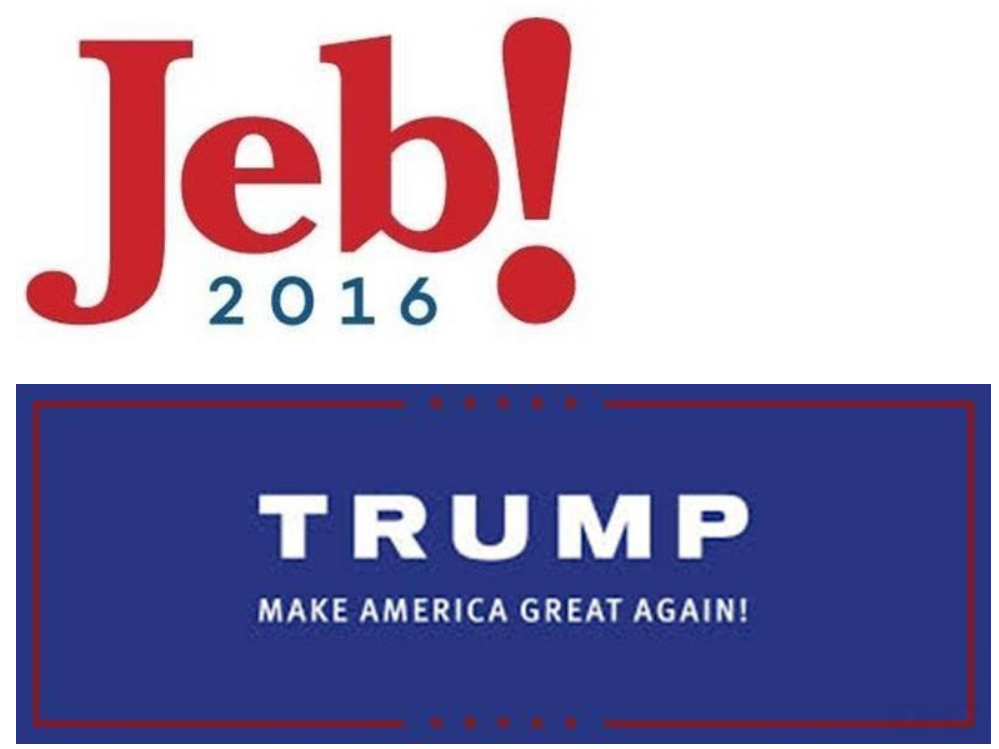 Let’s take a look at the campaign logos above to see what, if anything, they tell us about two of the leading presidential candidates.

The Bush logo boldly proclaims the nickname of the candidate, Jeb Bush.  The logo has red and blue lettering on a borderless white background, proudly reflecting the colors of the U.S. flag.  The logo assumes everyone is familiar with the candidate, familiar enough to know him by his nickname. The first letter in the word “Jeb” is capitalized and followed by two lower-case letters.  An exclamation point follows the word “Jeb,” either in an attempt to instill excitement or to balance the capital letter “J” to its left.  Below the word “Jeb” is the year “2016,” apparently there to remind those who easily forget dates that the candidate is seeking to be elected in the 2016.  There is no message or motto on the logo, only a name and a date, so anyone reading it has no indication what the candidate stands for.

The Trump logo boldly proclaims the last name of the candidate, Donald Trump, and assumes that everyone will immediately recognize the name.  The logo has white lettering on a blue field with a red border, proudly reflecting the colors of the U.S. flag.  Every letter of the name “TRUMP” is capitalized.  It is presented is a straightforward manner without any punctuation marks for emphasis.  Below the name “TRUMP” is the candidate’s motto in smaller font, “Make America Great Again!”  The logo has a business-like appearance, not unlike a businessman dressed in a blue serge suit, white shirt, and a red tie.

Let’s assume that most people, who pay any attention to politics, would know by now that Jeb stands for Jeb Bush.  They probably also know that there were two former presidents with the surname Bush; i.e. George H. W. Bush and George W. Bush, who happen to be Jeb’s father and brother, respectively.  For a candidate to have two former U.S. presidents in his immediate family is a unique occurrence in U.S. history.  Normally, one would be proud of that connection.  But the word Bush is conspicuously absent from the logo, as though the candidate is ashamed of the association.  Since Jeb is an unusual nickname, one might wonder how the candidate acquired that moniker.  Those with an inquiring mind could simply google the word “Jeb” and learn that Jeb is an acronym for the candidate’s full name, John Ellis Bush. Jeb is a pretty clever nickname, as far as such things go.  The nickname might be cute but it lacks substance, which is the sine qua non for candidates who want to be taken seriously.  But why omit your last name on the logo.  Why not say “Jeb Bush! – 2016”?  Certainly, the name “Jeb Bush” is concise enough and would fit nicely on a small sign.  Some might regard this omission as a subterfuge; others could care less.  It is one thing to proclaim that you are own man, as Jeb Bush has done countless times when reporters question whether he supports his brother’s policies or even his father policies when they were presidents; it’s quite another thing to distance yourself from your own last name.  However, it may simply be good politics to avoid mentioning the word “Bush” because many Americans believe that one more Bush in the White House would be tantamount to a dynasty, which doesn’t play very well in America.  It’s almost like Jeb Bush has an identity crisis of sorts.  One assumes there was much discussion by Jeb Bush’s advisers and that they and the candidate decided that omitting Jeb’s last name on the logo was the way to go and that few would pay much attention to it.

Donald Trump, on the other hand, is enormously proud of his famous surname, which he embraces for all it’s worth.  After all, Trump is a more than a name; it’s a brand.  Most people are familiar with the name, Trump, which is emblazoned across numerous residential properties, hotels, casinos, and golf courses around the country.  Many are also familiar with the Trump name from his show “The Apprentice” and his beauty pageants.  Some people are only slightly exaggerating when they say you can see from outer space the name TRUMP writ large on the Trump Tower in Chicago.  It certainly doesn’t hurt to have Trump as your last name in a presidential contest because the word “trump” literally means a playing card of a suit, which ranks above others.  By placing a simple motto, “Make America Great Again!” on the logo, people immediately know what Trump intends to do if he’s elected.  People who aren’t familiar with Trump, in his current role as a presidential candidate, might be interested enough to find out how the celebrity intends to make America great again.  Of course, this assumes our best days are behind us, which may or may not be the case depending on a person’s point of view.

The objective here is not to decide whether Bush or Trump has the better logo.  Each logo stands in isolation when viewed by an observer, who then makes a completely subjective assessment based on his or her viewpoint.

Rest assured, the candidate and his professional advisers spent a lot of time thinking about the best logo to put forward for the presidential run.  The logo will stay with the candidate throughout his campaign as long as he stays in the race.  The logo will fly on banners that are waved at the party convention and will be displayed on buttons worn by supporters across the nation.

Frankly, for ardent supporters of a candidate, logos are simply campaign paraphernalia to be displayed the same way a baseball fan wears a cap or a shirt with the home team’s insignia.  But for people who are not familiar with a certain candidate, a logo will make an impression on them whether they realize it or not.