The following article was posted on June 2, 2015.  Mother Nature took her sweet time, but she is finally imposing her will on a rigged stock market and she is doing so with a vengeance.  It is sad that it has come down to this.  The Federal Reserve thought it could control the free market forces of supply and demand without any repercussions.  As a result, the Fed, through its Zero Interest Rate Policy and numerous Quantitative Easing programs, forced countless investors into risky assets they would otherwise have avoided.  The Fed’s reckless, know-it-all monetary policies have been particularly hard on savers and seniors.  Now the chickens are coming home to roost.

At this point in the unrelenting bull market that began in March 2009, many market observers suspect or are convinced that the stock market is rigged.  One only has to look at the chart below to see the strong correlation between growth in the Federal Reserve’s balance sheet and stock prices to know that much, if not all, of the market’s rise is fueled largely by the Fed. 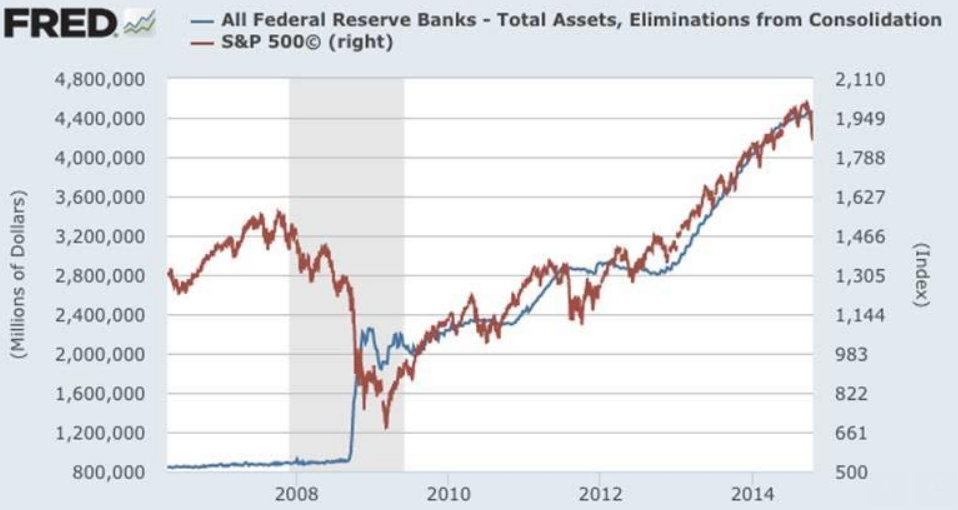 Market technicians, or chartists as they are called, have been predicting a significant market pullback or an outright crash for years and have been consistently wrong.  See http://investmentwatchblog.com/a-rigged-market-and-the-death-of-technical-analysis/

So where does that leave investors?  For buy-and-hold investors, the decision is easy.  Stay put.  They invest for the long haul and, if history is any guide, they will simply ride out market declines and ride the market back up to higher highs.  Another group of investors is the Don’t-Fight-the-Fed investor, who will stay long, and even add to their positions, as long as the Fed is accommodating and keeps printing money.

Complacency has investors tightly in its grip.  They have come to believe, if a major pullback hasn’t happened by now, it probably won’t happen anytime soon.  Any correction will be brief and should considered a buying opportunity.  The Fed is just too powerful to second-guess and is obviously intent on propping up the market, hell or high water.  As far as they are concerned, the Fed has their back and will continue to have their back because doing anything else is unconscionable.  Even if the Fed increases interest rates, as it has been talking about doing for years, it will quickly reverse course, if the market begins to collapse.  So, any pullback will be short lived.  They are not afraid that a long-term investment will be a short-term investment that has failed.

The black swan at this point is Mother Nature, which has a knack of frustrating man-made schemes, including rigged markets.  The saying is you can’t fool with Mother Nature for long before she gets her way.  Mother Nature is the Mother of all Black Swans.  It has always prevailed and it will prevail again in this instance because nature works in cycles.  Excesses must and will be wrung out of the system, one way or another.  Evil destroys itself.  And so will this rigged market.

This is something chartists cannot predict.  Nature will take its course in due time and its timetable is unpredictable.  Attempts at making correlations with prior market performance no longer work because our financial markets have never been manipulated like the current one.  Chartists are frustrated because the data; i.e., stock prices and volume, are being manipulated by forces that defy the principles of technical market analysis.  Because the data is corrupt, garbage in equals garbage out.  So, where does this leave us?

See also  Stop Trying To Predict The Next Market Crash

It leaves matters in the hands of Mother Nature, which will surely exact its toll.  And this, in turn, leaves investors extremely vulnerable.  Robert Louis Stevenson once said, “Sooner or later everyone sits down to a banquet of consequences.”  If you think a group of largely unaccountable insiders at the Fed know better than Mother Nature, then you should stay long.  Good luck with the proposition that you can just ride it out.  Prolonged excesses will require a prolonged time frame to purge, and that time duration may be longer than you bargained for.

If you believe there is a greater force that can and will gets its due, then you should be extremely cautious and position your investable funds accordingly.  In other words, you don’t want Mother Nature to be the black swan that blindsides you when it is evident that our financial markets are no longer tethered to the natural laws of supply and demand.  Price discovery has devolved into manipulation by central planners to achieve a desired price, which, in this case, means driving the market higher.

When a rigged market is unmoored from the fundamental market mission of seeking fair price discovery, it’s time to look for a safe harbor.  That isn’t being bearish.  It isn’t being alarmist.  It’s the prudent thing to do.