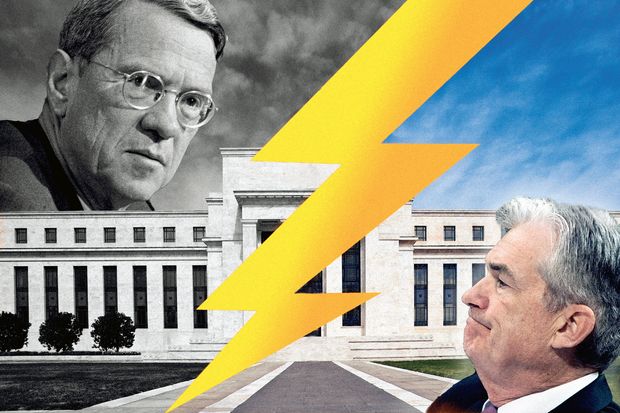 Last Monday, the Federal Reserve embarked on a yearlong listening tour to discover the concerns of the American people. The whole shebang of modern monetary methods—manipulated interest rates, levitated asset values, the supposed necessity of a 2% inflation rate—is on the table for constructive criticism.

But you know how it is with constructive criticism. The friend who asks to hear it really doesn’t want any. So it is with Richard H. Clarida, the Columbia University economist turned vice chairman of the Federal Reserve Board.

In a Feb. 22 speech, Clarida invited the public’s comments as the central bank undertakes a top-to-bottom reappraisal of the way it does business. Then he said this: “The fact that the system is conducting this review does not suggest that we are dissatisfied with the existing policy framework.” A comprehensive description of that framework duly followed. So admirably clear was his message that it might have curled your hair.

It might, indeed, except for 10 years’ familiarity with once-heretical ideas. “Quantitative easing” seemed wild-eyed enough at the time it was hatched in 2008. Who objects now?

Clarida acknowledged no doubts. He said that radical monetary policy has worked, that it will continue to work, and that it may well become more radical. He contended that low interest rates are here to stay and that new policy “tools” must be sharpened and kept at the ready. As to potential adverse consequences of administered rates and the mind-control games meant to “anchor” our collective expectations of the future, he mentioned none.

The Mike Pence of the Fed, Clarida was pushing no novel agenda of his own. His interest-rate worldview is the institutional one. It springs from the contention that the natural level of rates since the financial crisis has naturally and irresistibly fallen.

Certainly, rates are astoundingly low—Bank of America Merrill Lynch recently was able to count $11 trillion of bonds worldwide quoted at yields of less than zero. Clarida said that the decline in the so-called neutral rate of interest “is widely expected to persist for years.”

READ  LIFE IN THE BLUE ZONES: Death of NYC’s most beloved restaurants puts landlords in danger.

Just who has made bold to forecast the course of this conceptual rate of interest (you can’t see it and you can’t trade it), Clarida didn’t say. But he did warn of the consequences of its collision with the so-called zero bound.

At zero percent, he said, the Fed would be hard-pressed to ensure that the inflation rate stays put in the neighborhood of 2%. That you can’t have no inflation, the vice chairman takes as a revealed truth.

Creditors, and any who lived through the Great Inflation of the late 1960s through the early 1980s, might disagree. They might prefer an inflation rate of nil.

William McChesney Martin, the longest-serving Fed chairman, said in August 1955, “We can never recapture the purchasing power of the dollar that has been lost.” Martin, who, in the Great Depression, witnessed an actual, virulent deflation, was nonetheless adamant that defending the integrity of the currency was job No. 1.

Whether the policies of the current Fed, led by Jerome Powell, are well or poorly advised is, to a degree, a matter of opinion. But the value proposition confronting today’s bondholders is a question of fact. At a 2% rate of inflation, the real, after-tax return on a 2.68%-yielding 10-year Treasury note is hardly enough for the tip jar.

Nor are the monetary-policy options now under discussion calculated to improve the lender’s odds. Batting around big ideas, the policy makers are weighing the advisability of seeking to deliver a 2%-plus rate of inflation over the course of the business cycle. Shortfalls from the target in recession would be neutralized by overshoots during the subsequent expansion. “Persistent inflation shortfalls carry the risk that longer-term inflation expectations become poorly anchored or become anchored below the stated inflation goal,” Clarida tried to explain.

READ  LIFE IN THE BLUE ZONES: Death of NYC’s most beloved restaurants puts landlords in danger.

Yet the term “persistent inflation shortfalls” from that 2% target exactly describes the postcrisis record of Fed policy making. Still not doubting their ability to control events, the mandarins keep searching for a bigger bag of tricks.

Clarida broached the idea of establishing a “temporary ceiling for Treasury yields at longer maturities by standing ready to purchase them at a preannounced floor price.” It was, in fact, how the Fed operated during World War II. Listening to the economist talk about emergency measures, it’s easy to forget that the nation is no longer fighting a two-ocean war.

This column would opine that artificially low interest rates never fail to store up trouble—facilitating leverage, they promote not growth, but larger balance sheets. It would opine, further, that the central bank is playing with fire by actively seeking to depreciate the dollar, a currency that, whatever its current lofty status in the world, is a piece of paper of no defined value. And it is our opinion that the Federal Reserve should at least consider the appealing course of letting the market alone.

As for the absence of anything resembling a margin of safety in vast portions of today’s fixed-income markets, it’s no opinion, but a most worrisome fact.

James Grant is founder and editor of Grant’s Interest Rate Observer. To read more of him, sign up for his almost-daily reports.