We are writing today with grave concern that you continue to book Rudy Giuliani on your air to spread false, debunked conspiracy theories on behalf of Donald Trump. While you often fact check his statements in real time during your discussions, that is no longer enough. By giving him your air time, you are allowing him to introduce increasingly unhinged, unfounded and desperate lies into the national conversation

What is Giuliani saying that Biden needs to silence?

Today, Giuliani was on ABC discussing the documents released by John Solomon that conclusively demonstrate that Burisma, Hunter Biden’s company, was involved in the firing of the Ukrainian prosecutor investigating them.

Here’s a post I made about those documents yesterday.

Hundreds of pages of never-released memos and documents — many from inside the American team helping Burisma to stave off its legal troubles — conflict with Biden’s narrative. And they raise the troubling prospect that U.S. officials may have painted a false picture in Ukraine that helped ease Burisma’s legal troubles and stop prosecutors’ plans to interview Hunter Biden during the 2016 U.S. presidential election. For instance, Burisma’s American legal representatives met with Ukrainian officials just days after Biden forced the firing of the country’s chief prosecutor and offered “an apology for dissemination of false information by U.S. representatives and public figures” about the Ukrainian prosecutors, according to the Ukrainian government’s official memo of the meeting. The effort to secure that meeting began the same day the prosecutor’s firing was announced. In addition, Burisma’s American team offered to introduce Ukrainian prosecutors to Obama administration officials to make amends, according to that memo and the American legal team’s internal emails. The memos raise troubling questions: 1.) If the Ukraine prosecutor’s firing involved only his alleged corruption and ineptitude, why did Burisma’s American legal team refer to those allegations as “false information?” 2.) If the firing had nothing to do with the Burisma case, as Biden has adamantly claimed, why would Burisma’s American lawyers contact the replacement prosecutor within hours of the termination and urgently seek a meeting in Ukraine to discuss the case?

Biden trying to force MSM to not expose his corruption.

Its too bad we have memos to prove it and video evidence of him admitting to it and bragging about it. 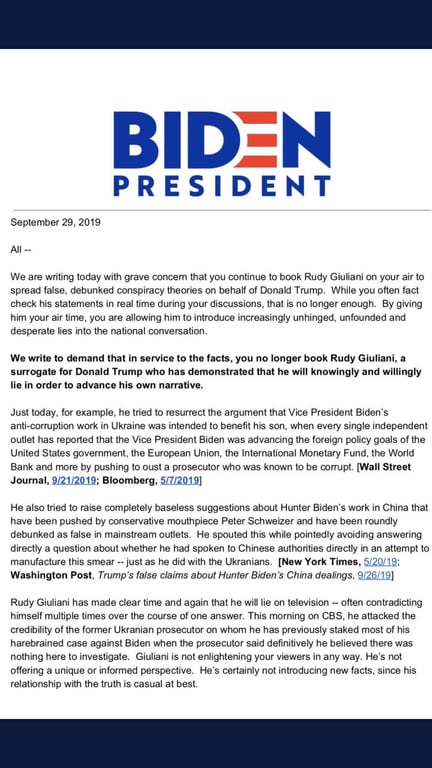