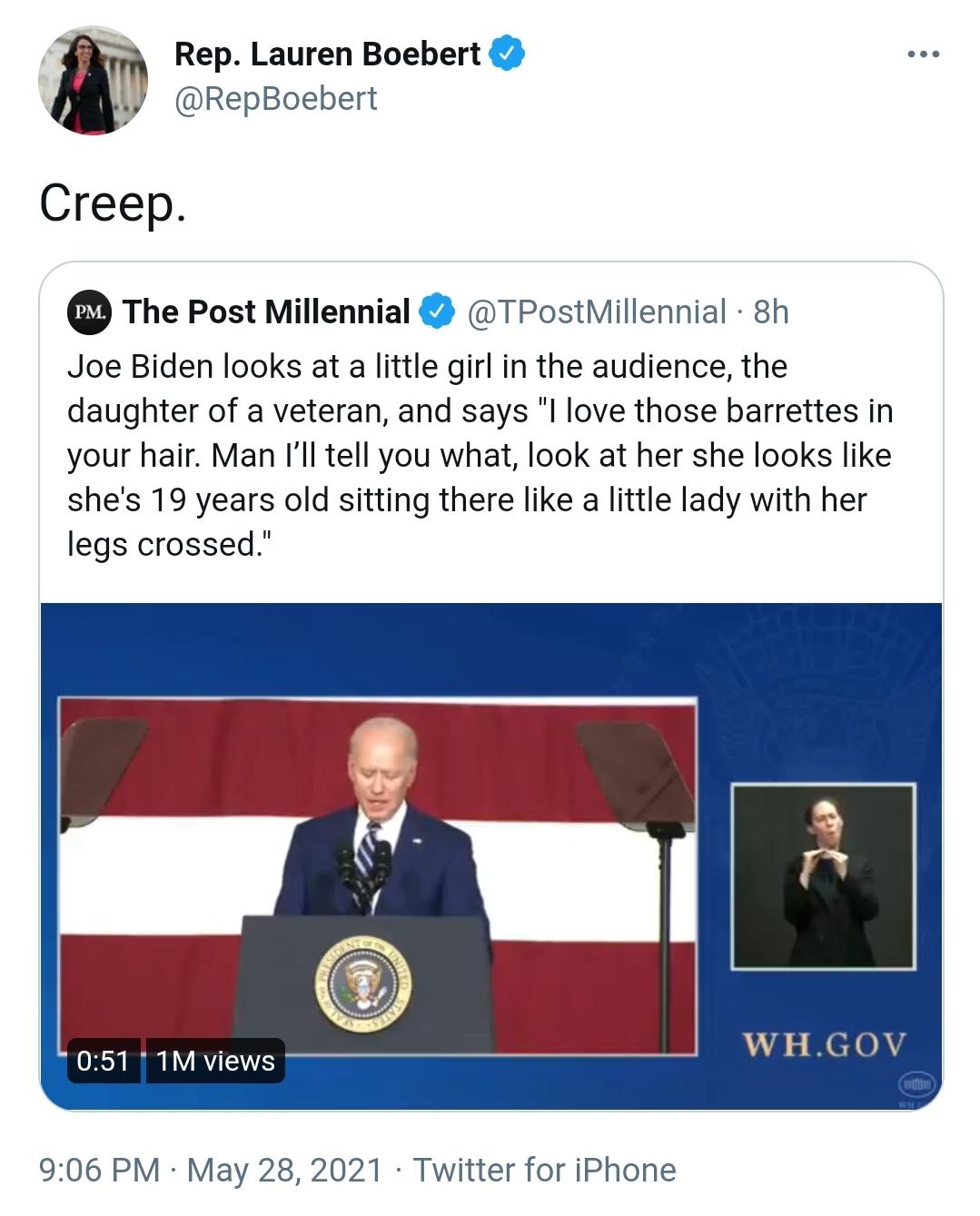 You have to watch this clip.

Joe Biden attempts to flirt with a child and the corporate media won’t report it: pic.twitter.com/V8T0uenyft

IT’S THE RETURN OF CREEPY JOE: ‘Looks like she’s 19:’ Uproar after Biden’s remarks about girl at Virginia military base.

Flashback: Joe Biden Accused of Groping Breast of Secret Service Agent’s Girlfriend During 2009 Photo-Op. “According to the report, an unidentified Secret Service agent was suspended for a week after the incident for shoving the vice president ‘after he cupped his girlfriend’s breast while the couple was taking a photo with him’.”

Flashback: Democrat Makes #MeToo Claim Against Joe Biden: He Smelled Me and Kissed My Head. “Flores said that pictures of Biden touching other women inappropriately made it more difficult to keep silent, referring to Biden nuzzling the neck of Secretary of Defense Secretary Ash Carter’s wife, kissing Sen. Chuck Grassley’s wife on the lips, whispering in women’s ears, and snuggling women on the campaign trail.”

See also  Biden to Remove Air Marshals From Flights. Will Use Them for Welfare Checks on Illegal Aliens.

“Agents say that, whether at the vice president’s residence or at his home in Delaware, Biden has a habit of swimming in his pool nude,” Kessler writes in the book – due for release Aug. 5.

“Biden likes to be revered as everyday Joe,” an unnamed agent told Kessler. “But the reality is no agents want to go on his detail because Biden makes agents’ lives so tough.”

Plus: Washington Post: What Are We Going To Do About Creepy Uncle Joe Biden?

And: ‘Creepy Veep’ Joe Biden ‘nuzzles’ wife of colleague and claims he is friends with lots of Somali cab drivers.

Related: Talking Points Memo: Why Does Creepy Uncle Joe Biden Get A Pass From Liberals?