With all the recent discussion around tax reform and how it will impact the federal deficit, it’s important to take a step back and look at another looming fiscal crisis: debt held by the state governments. You might be surprised to find out that overall debt at the state level is now well over $1.75 trillion. What does that look like mapped across the country? 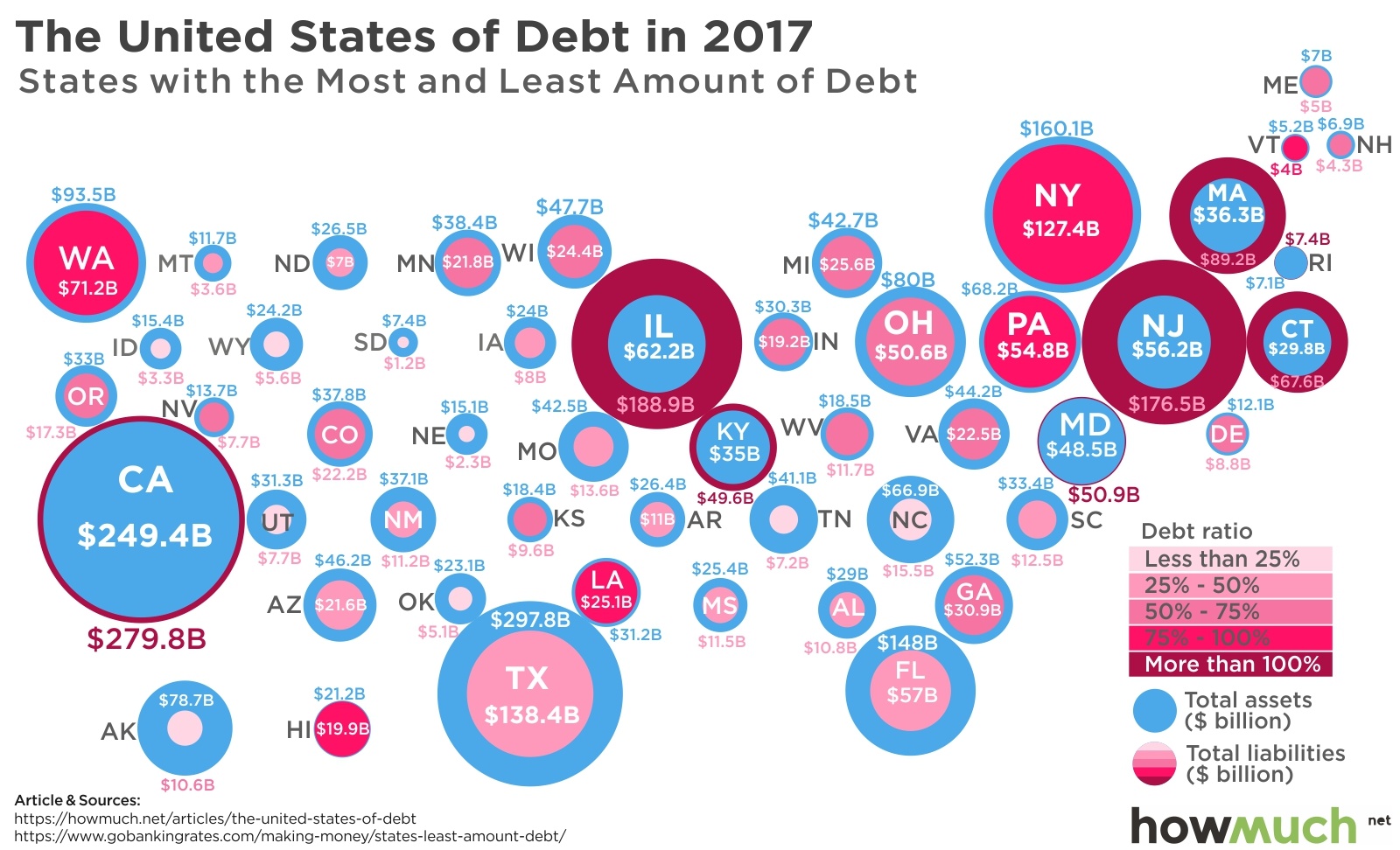 Our numbers come from a recent analysis by gobankingrates.com. Our viz puts these numbers in an easy to read map, showing you the fiscal situation on three levels. First, the blue circles represent the total assets a state owns. These are the funds and property a government can use to pay its bills. Second, we placed red circles underneath to represent the state’s liabilities. If you see any red outside of the blue circle, then your state is underwater. And third, we color-coded the red circle from pink to dark red, showing you how severe the situation is.

The most important thing to keep in mind is the ratio between liabilities and assets. Think about it like this. Someone like Bill Gates can run up a huge credit card bill with no problem because he has billions of dollars in the bank. He can easily pay it back because he’s got so many assets. The average Joe, on the other hand, must be thriftier.

See also  Gasoline Shortages Coming To The US In Less Than 6 Months? Oil Supply Problems To Worsen?

That’s why a state like Texas can run up a debt of over $138 billion and still be in a decent position—it’s less than half of the state’s total assets. Massachusetts is significantly worse off with a debt load of only $89 billion because that’s more than two times as high as the state’s assets. State legislators in Boston could literally sell everything they owns and there still wouldn’t be enough money to pay for half of all their liabilities.

Top 10 States with the Most Debt

We’ve included the total debt load and assets (in $ billions), and ordered the list according to the debt-to-asset ratio.

This list speaks volumes about the real fiscal situation in the United States. The federal government can control the currency and print new money if it needs to, but state governments are in a totally different situation. We have four states with a debt-to-asset ratio above 200%, and 29 over the 50% mark. Even if you live in a fiscally responsible state, a default by any one of these statehouses would send shockwaves across the economy.

1 thought on “Mapping States With Enormous Debt Problems. Where Does Your State Rank?”