More millionaires live in the U.S. than any other country in the world, and it’s not even close. That’s according to the 2019 Global Wealth Databook by Credit Suisse. Here’s how the U.S. compares to the rest of the globe. 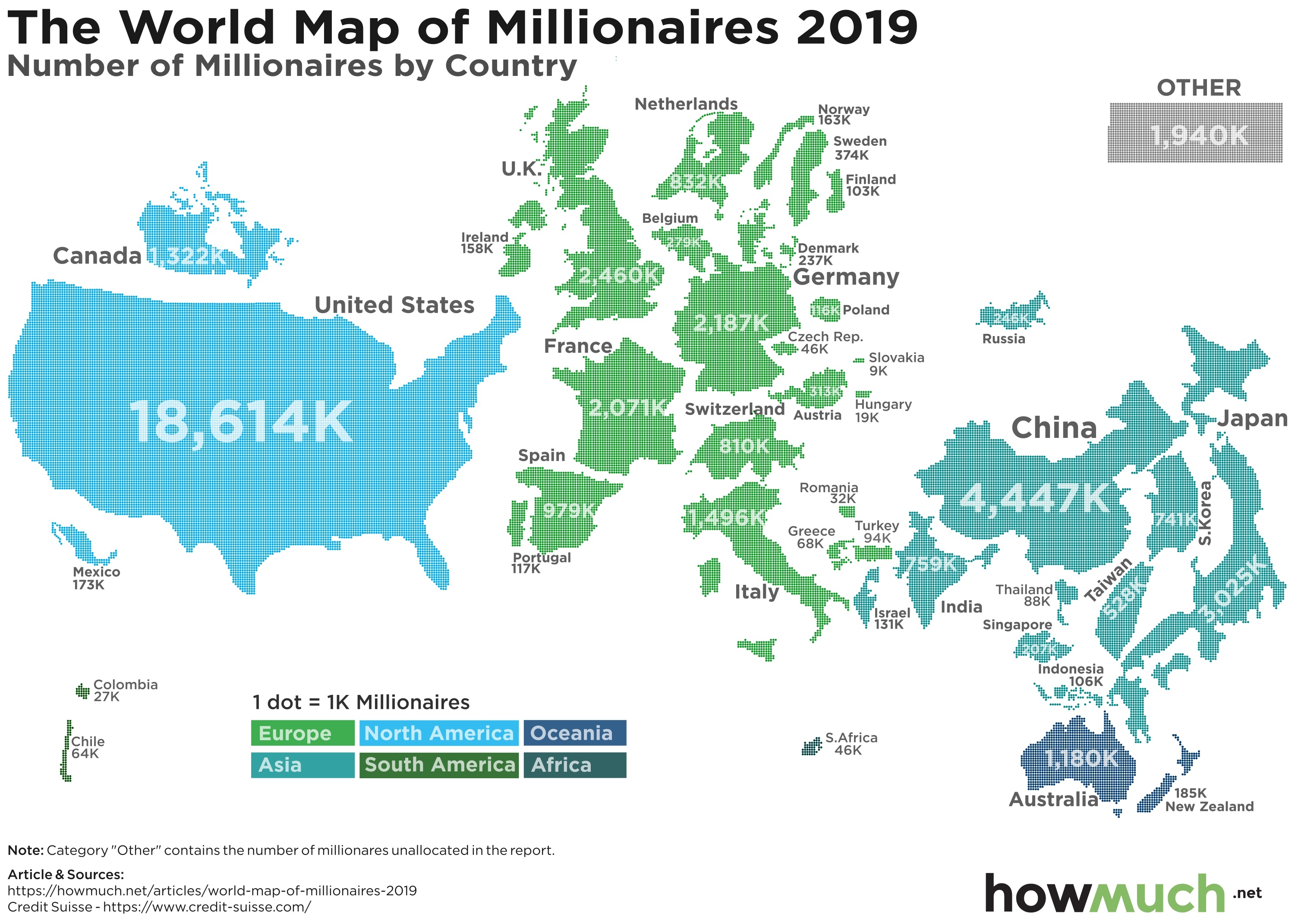 The numbers behind our map come from the 2019 Global Wealth Databook by Credit Suisse. You can read about the researchers’ detailed methodology in the report itself. We created a map using one dot to represent 1,000 millionaires, color-coding each country by continent. Credit Suisse grouped a number of countries with a small number of millionaires together under “other” and we placed them in the top right corne. This lets you easily and quickly see where millionaires live, and where they don’t, providing a snapshot of global wealth.

Top Countries Where the Most Millionaires Live

For starters, the United States has by far the most millionaires of any country in the world, with over 18 million people. That’s more than four times as many as second-place China. And just like how millionaires tend to come from some countries and not others, they also tend to live in some states, especially young millionaires. In any case, there’s no doubt a lot more rich people in America than anywhere else in the world.

That being said, there’s no shortage of millionaires in Europe and Asia. The U.K. (2,460K) is home to more millionaires than any other country in Europe, followed closely by Germany (2,187K) and France (2,071K). Eastern Europe is noticeably small with only a handful of countries making it onto our map. Russia is tiny (246K). Keep in mind our map doesn’t adjust for the size of a country’s population. Japan (3,025K), South Korea (741K) and Taiwan (528K) therefore appear much bigger than they do on a physical map, indicating just how wealthy these developed countries have made some people.

There are two continents almost entirely missing. South America only has two countries appearing on the map, Colombia (27K) and Chile (64K). Africa only contributes one in South Africa (46K). In fact, an enormous portion of the world’s population still lives in extreme poverty, and our map illustrates the stark wealth inequality between developed countries and everywhere else.

Why do you think the U.S. has so many rich people? Let us know in the comments.