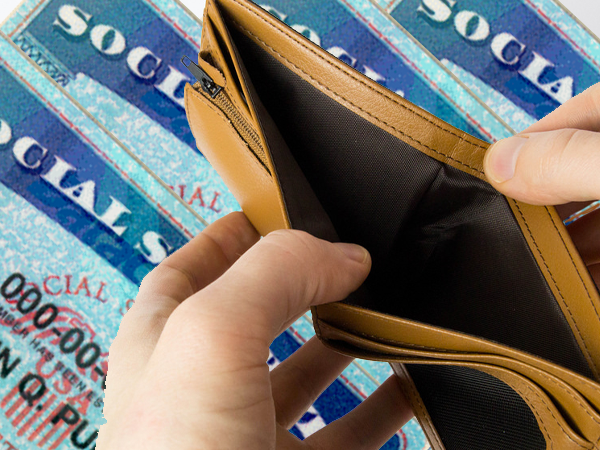 According to official reports, in about 15 years a big cut to Social Security benefits can be expected if nothing is done.

What’s even more troubling is the fact that most people won’t be able to mitigate the damage if everything pans out the way reports say it will.

According to data provided by the Fed, about 25% of the country will be able to “shrug off” a major cut to their Social Security benefits:

We show that the only segment of the population for whom employer-sponsored retirement wealth is significantly more important than Social Security is the top wealth quartile.

Over at Barron’s, they provide insight as to why the top quarter of the wealthiest people in the U.S. nearing retirement don’t have to worry about these cuts (emphasis ours):

The country’s 401(k)s and individual retirement accounts? The old-fashioned company pension plans? Most of these assets are owned by the wealthiest 25% of the country, the Fed calculates. Between 83% and 85% of the total balance is in the hands of the highest-earning one-fourth.

So that would leave 15-17% of the total balance for pensions, 401k plans, and IRAs in the hands of 75% of near-retirees. That signals Social Security benefits as an important part of the average retiree’s income.

The Fed report on pension plans, Social Security, and wealth in retirement boils down the main issue:

Consequently, the key policy question is not about how to restore the distribution of employer-sponsored retirement wealth to a more egalitarian past. Rather, the important policy question is more about how most families outside the top quartile are able to maintain a reasonable standard of living in retirement.

If you were being paid $2,500 each month by Social Security, and that amount accounted for most of your “standard of living,” a 25% cut means that payment would be reduced to $1,875 per month.

Not a good way to maintain any standard of living.

According to the Barron’s piece, most people use Social Security to account for a rising portion of their standard of living:

For the middle two quartiles by income — in other words, the middle 50% — Social Security accounts for somewhere between 47% and 64% of their total retirement wealth. For those in the bottom 25% it’s nearly all of it. They hold, on average, just $28,000 in private retirement plans.

As for the wealthiest 25% that would be able to “shrug off” a big cut in benefits? The Fed report averages them (see income table below):

This means some of the “wealthiest” may not have the retirement of Will Smith, and could instead have an upper-middle class retirement.

It also means the bottom 75% of people don’t have as strong of a combined average as the top 25% do by themselves.

So in 15 years, if nothing is done, the outlook is fairly dire for three-quarters of the near-retirement population.

Social Security is the main source of retirement wealth for most families, and that is the key to understanding differences in retirement saving behavior across the wealth distribution.

But didn’t seem to provide a meaningful solution:

… if tax policies designed to overcome the inherent obstacles to expanding employer-sponsored coverage are not actually benefiting most workers outside the very top of the wealth distribution, an alternative might be to allocate those resources to directly shoring up or even expanding Social Security.

The report was referring to pensions, which are already in trouble, so could they really “shore up” Social Security? Seems like a desperate move.

Social Security Trustees pointed to a tax increase of 1% of GDP, with Medicare needing an additional amount. According to the Barron’s article, that equates to a rather large tax hike of 10%. Not many near-retirees will like that, either.

But something has to be done, or big cuts are on the way. Fifteen years will pass a lot faster than you think.

Regardless of whether Social Security runs into trouble in 2034 or not, it would be wise to start taking matters into your own hands (as best as you can).

Consider adding protection from instability to your retirement portfolio through savings and diversification with a variety of asset classes. Precious metals such as gold and silver are assets that can fit in that kind of plan.

But don’t wait, because 2034 is right around the corner. Now is the time to prepare your portfolio for the worst.