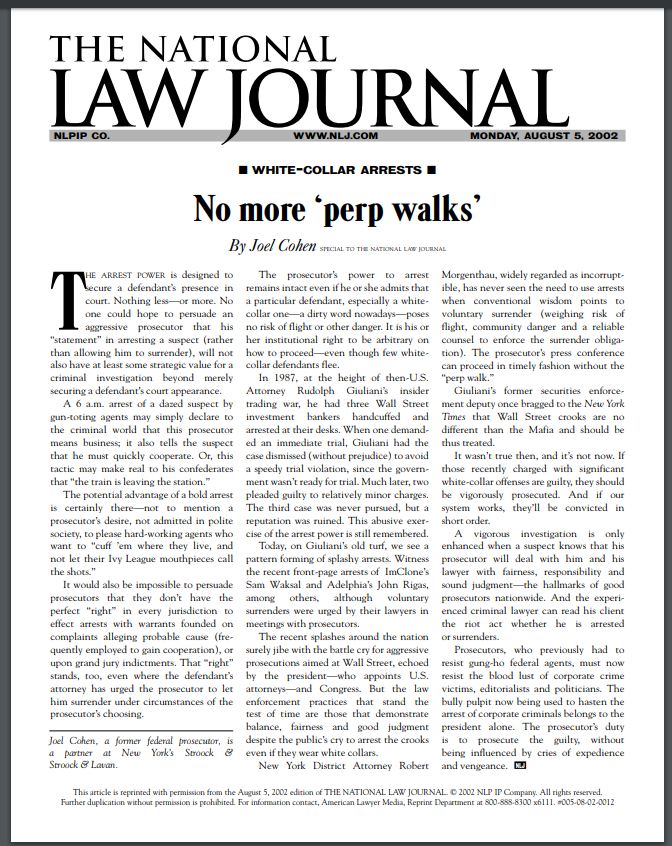 It very clear that Mueller is acting like any other prosecutor and is using the press for PR stunts. CNN’s reporter David Shortell claimed he had “reporter’s instinct” which led him to get footage of Roger Stone’s pre-dawn arrest, not a tip from the FBI or special counsel’s office. That is about as credible as all the nonsense that CNN is not biased and fake news.  The manner in which this was all staged was outrageous. They stage a show of force and this has always been something very controversial.

Rudy Giuliani’s was highly criticized for staging arrests like this in huge profile perp walks as they were called concerning the non-violent white color people who were unarmed. Giuliani would alert the press and arranged for people to be arrested in dramatic staged events, and then dropped charges for lack of evidence on high-profile cases or forced them to plead to some tax charge rather than going to trial. He would send in agents guns drawn to arrest people in their workplaces with charges later dropped or lessened. This was all for a show as what was done to Stone.  Guiliani deliberately sought to damage the reputations of people he targeted in these “perps”. Guiliani arrested a veteran stock trader Richard Wigton, of Kidder, Peabody & Co., during February 1987 claiming insider trading. He was handcuff and march him through the company’s trading floor, with Wigton in tears. Within just 3 months, Guiliani had to drop the charges against both Wigton for his entire theory of insider trading was wrong. Guiliani made a public statement: “We’re not going to go to trial. We’re just the tip of the iceberg.” No charges were ever made thereafter for there was no iceberg.

A full investigation should now be launched against Mueller and CNN. In my own case, I was not at home so they tried the predawn stuff, but I was not there. I self-surrendered in court and they were trying to just throw me in prison for the weekend. My lawyers convinced the judge that we showed up because the US Attorney told us the time on Friday when the court was not scheduled til Monday. When it became obvious it was a lie, the court agreed to an emergency hearing after lunch. When I returned, the full press core was there with artists. The prosecutor called everyone. I was granted bail and walked out because of their staged games and obvious lies to the court. They told the judge I would flee to my home in London which was full of art, cars, and all sorts of things. I raised my hand, not being the easily intimidated type, and asked could I please have the address of this home. They immediate said – oh, we had it on good information. They would say anything and lie about everything to win. They will NEVER prosecute themselves and if anyone else publicly lies about such things they get 5 years in prison. Prosecutors will NEVER tell the truth because they are NEVER held accountable to anyone.

See also  Pelosi is directing police to ARREST vaccinated people who aren’t wearing masks... Congressman Chip Roy rages at the absurd new mask mandate. "Vaccines or Masks? Which is it?"

There is ABSOLUTELY no way CNN had an “instinct” to be at the right place at the right time pre-dawn. That is a bald-faced lie for this is standard operational procedure intended to demoralize the people and mentally break them. We have perjury going on here and the phone records should be subpoenaed right now! This proves beyond a shadow of a doubt that the Mueller investigation is all about a political PR campaign.