NBC Tried to Claim There Were 800,000 Gun Control Marchers in DC — Not Even Close

In the aftermath of the March for Our Lives that took place in Washington, D.C., and across the country, NBC News erroneously reported on social media the number of marchers was almost 1 million. The true number, however, was significantly lower.

Initially, NBC News reported there were an estimated 800,000 people who registered to vote at the march on Saturday but then issued a “correction,” saying 800,000 is the number of people who participated, which is what the March for Our Lives organizers claimed the number to be in the nation’s capital:

Correction: The number of participants at the #MarchForOurLives event in DC is estimated at 800,000, but not 800,000 registering to vote.

CBS News, however, reports there was actually an estimated 200,000 people at the march. The number comes from Digital Design & Imaging Service Inc. Organizers were hoping to reach a crowd size of 500,000.

(Paul Chesser, Liberty Headlines) A satirical video that overdubs fiery rhetoric of Adolf Hitler (in German) over a speech given by student activist David Hogg at Saturday’s “March for our Lives” in Washington has earned it a warning to would-be viewers on YouTube.

The video channel, owned by Google, flagged the 56-second send-up of the gun control advocate — who shot to fame following his reporting and commentary at the Parkland, Fla. school shootings — as “inappropriate” or “offensive.”

Viewers attempting to watch the video were met with the following message, and then had to click “I understand and wish to proceed” in order to play it: 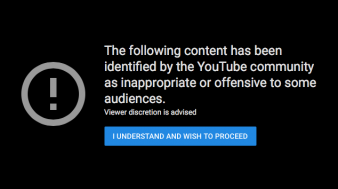 The parody, posted on a YouTube channel managed by “MAGA3D,” converts the footage of Hogg’s speech in DC into a black-and-white grainy imagery, with the sound of a 1930s-era film projector in the background, and the impassioned speech of the German fuhrer roughly matching up to Hogg’s lip movements.

The sound of applause and salutes to Hitler in response from the crowds are linked to the fist-raising responses from participants at “March for our Lives.”

“MAGA3D” titled the video, “Hogg Hitler! The little dictator in the making.”