For those who grew up in New England, single-digit temperatures, snow squalls, and icy roads are nothing outside the ordinary. With at least six days last year averaging colder than today’s forecast, it seemed almost impossible that gas prices would break last season’s record. Accompanying this week’s cold was a combination of factors amounting to conditions that were far from normal. As the risks began to present themselves on the morning of Wednesday, December 18, AGT-CG (Non-G), New England’s largest natural gas hub, sold for as much as $15.25/MMBtu, the highest price observed since January 30, 2018. So, what really caused natural gas prices to spike when they were so weak for the last six months?

Major changes in New England over the last two years have resulted in greater natural gasdemand for power production. New England is known for its pipeline constraints, and the retirement of the 680 MW Pilgrim nuclear generating has almost entirely been met with increases in natural gas-fired generation; almost 3 GW. On top of this, one of Algonquin’s largest suppliers, Tetco M3, is operating at reduced capacity following thorough investigations into the pipeline quality. As a result, Tetco M3, Iroquois Z2, Algonquin, and TGP Z6 were operated at near full capacity, and all saw operational flow orders in place for today’s (December 19) market. These operational flow orders imposed an additional set of rules on natural gas transactions, increasing competition and basis separation. Additionally, the price strength on Algonquin occurred even though the Atlantic Bridge project is partially implemented, allowing an additional 50 million cubic feet per day of throughput capacity compared to last year. 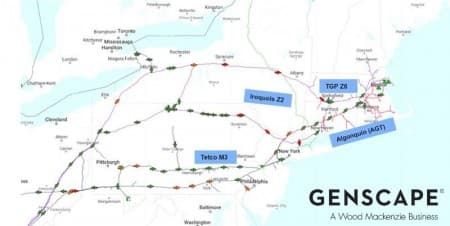 One major difference between the coldest days last winter and this Wednesday-Friday (December 18-20), is the presence of liquefied natural gas (LNG) in the market. New England relies heavily on LNG, which is often imported from overseas. When temperatures average below 20°F in New England, residential and commercial heating load will exceed total import capacity on the pipeline network, so LNG is required to support any amount of gas-fired generation in the supply stack outside of Southwest Connecticut. The largest receipt point for LNG in New England is called the Northeast Gateway, which is an off-shore floating buoy that can transport as much as 800 million cubic feet of natural gas per day from LNG tankers to the largest demand centers. In December, temperatures took a dive before Excelerate could get a tanker to it.Related: Why Hasn’t Hydrogen Gone Mainstream? 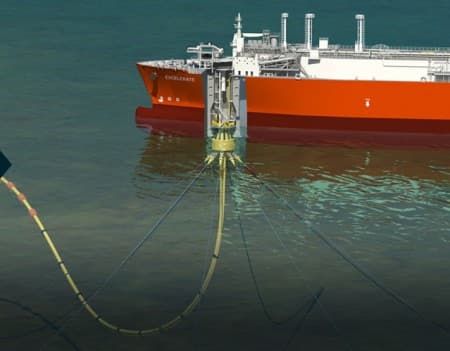 Additionally, the Millstone Unit 3 nuclear generator, one of New England’s remaining nuclear power stations with a winter capacity of 1,235 MW, ramped down on December 17. The Nuclear Regulatory Committee required that Millstone Unit 3 enter cold shutdown because one of their primary backup diesel fuel generators was unable to come back online after 14-days of maintenance; the longest period allowed. If this nuclear baseload generation were to be replaced with gas-fired generation, it would translate into roughly 200 million cubic feet additional gas demand per day.

The gas price movements this week may be a precursor into gas and power prices in January, February, and beyond; the most significant impact being to Algonquin NG Basis and MassHub Peak futures. If this week leads to Algonquin futures rallying for January or February, this could incentivize Excelerate to send a tanker to the Northeast Gateway, as Algonquin competes with the UK NBP for LNG contracts. If the UK NBP index continues to fall as it has lately, and Algonquin contracts begin to pick up, this is a good indication that more LNG may be coming to the region in a few weeks.

Additionally, the Tetco M3 maintenance and the prices that materialized this week may be a precursor to how this winter will play out as well. The ongoing verification digs may prove that the capacity restrictions on M3 will need to continue through the remainder of the winter, although the M3 restriction may be lifted as early as next week, according to Tetco’s latest update. When temperatures get even colder, basin pricing might be the largest drivers of upside to Algonquin, not just LNG deficits and nuclear baseload outages.