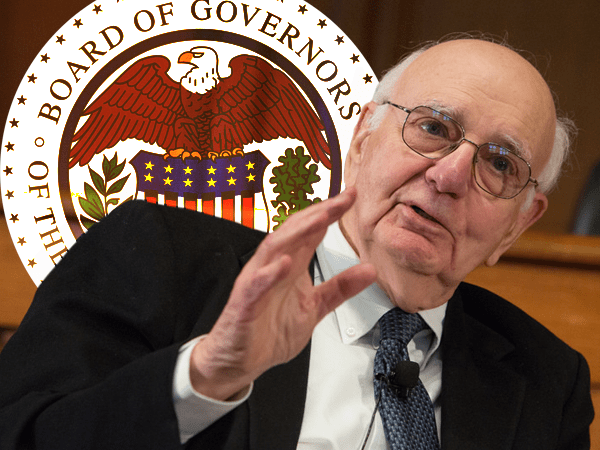 In that case, the economic band-aid called “The Volcker Rule” worked.

He’s 91 now, and as reported in the New York Times his respect for the Fed is “all gone.” In a recent interview about his memoir, not only did Volcker take the opportunity to travel down memory lane…

“I puzzle at the rationale,” he wrote. “A 2 percent target, or limit, was not in my textbook years ago. I know of no theoretical justification.”

With a laugh, he told me that he believed the policy was driven by fears of deflation. “And we haven’t had any deflation in this country for 90 years!”

During the interview he also made an eerie blanket statement summarizing his thoughts about the U.S., the Fed, and the economy.

He stated clearly, “We’re in a hell of a mess in every direction”. Talking about the stability of banks later in the interview, Volcker revealed an unsettling thought (emphasis ours):

They’re in a stronger position than they were, but the honest answer is I don’t know how much they’re manipulating.

He finished the New York Times interview saying, “We need stronger supervisory powers”. It’s tough to disagree with that.

Especially after the Dow dropped 1400 points two weeks ago. And a slight recovery dropped dramatically again this week. The worry in the markets is clear.

On October 3, the Dow sat at 26,828. Market optimists were singing the praises of a market on the way to the top. But things have turned around dramatically.

See also  Europe Facing Potential Famine in the Wake of Nord Stream ‘Attack’ :As the unprecedented energy crisis across Europe worsens, the recent attack on the Nord Stream 2 gas pipeline could be the final nail in the coffin, amid fears of widespread famine.

Stephen Innes, head of trading for Asia-Pacific at Oanda Corp even stated that the market is changing from a “wall of worry” into a “wall of pain.”

Now another expert says the U.S. might be past the tipping point.

Hawkish Fed May “Push the U.S. Into Recession”

According to a recent CNBC report, the Fed has signaled it could raise rates 3.5% by 2020. That means more rate hikes are likely. (And we know how they like to report rates with blinders on.)

Lyn Graham-Taylor, senior fixed income strategist at Rabobank issued a dire warning in the report, stating “We think the Fed will ultimately push the U.S. into recession by following this path”.

We’ve already reported how it seems like the Fed is sweeping the yield curve under the rug as a signal of upcoming recession. But that same yield curve (YC) was providing insightful cues for Rabobank analysts. As of this week the YC between 2 and 10 year Treasuries was sitting at 28 basis points.

The lower the number the higher the concern in the bond markets. This curve is the second lowest in 10 years. We reported the lowest back in July, at 27 basis points.

These cues led to an alarming conclusion issued by Graham-Taylor (emphasis ours):

The analyst said the Fed would probably “overhike” with just two more rate rises and that would be enough to trigger an economic downturn.

One more rate hike is due in December, and another one will likely happen in early 2019. Maybe the yield curve will prove to be a valuable recession signal after all?

Wall Street’s “fear gauge,” the CBOE Volatility Index, is currently sitting at 24.22. The last time fear in the markets was this high was back in April.

See also  OK, time to pack up. Recession is cancelled.

According to another CNBC article, home sales are at a two-year low and auto sales are dropping like flies. Not good signs.

Before, it seemed like the Fed was optimistic about the U.S. economy, even though it wouldn’t look beneath the surface. Now, even the surface is getting murky.

Will the Fed finally wake up? I wouldn’t count on it.

Don’t Let Your Retirement Get Pushed Around

Based on the recent Fed meeting minutes, it seems like they think that their “printed money plan” is working just fine, so they can keep raising rates.

Bottom line, the U.S. credit-dependent economy needs deposits, loans, interest, and other financial instruments to fuel it. If any of that freezes because of out of control rate hikes, you’re in for a bumpy ride.