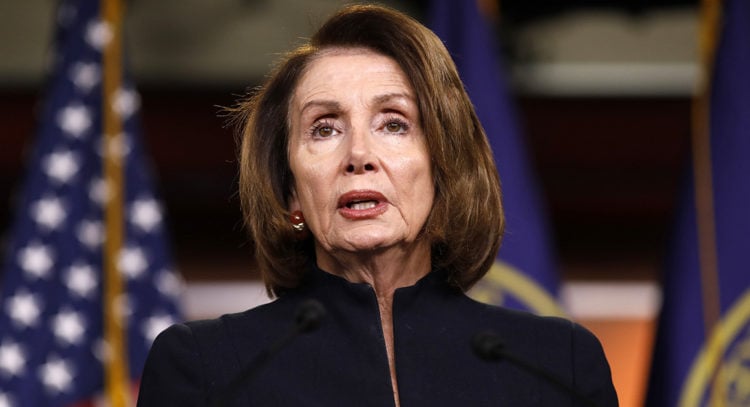 Do you know the official Nancy Pelosi net worth? Most people have heard of the name Nancy Pelosi, even if they don’t know the first thing about American politics. Granted, her name comes up in the news on a fairly routine basis so it’s not hard to have some type of generic idea who she is. If you’re not quite sure, she’s a lifelong politician that has served in numerous different roles throughout the House. As a matter of fact, she’s been in politics for several decades now.

As of January of 2019, it is reported she has a net worth of approximately $120 million. This was something that shocked a lot of individuals, especially considering that there is a lot of frustration between the American people and career politicians, especially when it comes to the amount of money they make versus the income of an average American citizen. That being said, it’s important to note that most of her financial status doesn’t have anything to do with her role in politics. In reality, she and her husband made a great deal of that money before she ever even got involved in such things.

There’s no doubt that $120 million is nothing to sneeze at. That’s more money than most people will ever see in a lifetime. The question is, how did she do it? The first thing you need to know is that she didn’t do it alone. As previously mentioned, this is money that she and her husband have made over the years. If only one of them were responsible for making this much money, who knows what might have eventually happened. Nevertheless, Nancy Pelosi does have a considerable net worth, so you might be wondering how Nancy achieved it.

Pelosi is of Italian-American descent. Her father, Thomas D’Alesandro Jr., was a Democratic U.S. Congressman from Maryland, and a Mayor of Baltimore. Pelosi’s brother, Thomas D’Alesandro III., also a Democrat, was mayor of Baltimore from 1967 to 1971. He declined to run for a second term. She graduated from Trinity College in Washington DC, with a B.A. in political science. She married American businessman Paul Pelosi in 1963.

In a nutshell, it all comes down to real estate. As it turns out, she and her husband have been heavily involved in real estate for several years. She actually owns a number of different properties, including several commercial properties that are used as apartment buildings or as office space for corporations. In addition, she has several other properties that can be used as vacation homes or in certain circumstances, homes that are rented out to other tenants. Make no mistake about it, she doesn’t rent what you might consider a typical, modest home out to everyday citizens. The properties that she is involved with are extremely high-end and they bring a premium price. That’s precisely how she has accumulated so much money over the years.

It’s also worth noting that the $120 million isn’t just counted in cash alone. As a matter of fact, all of the property that she owns is counted as assets in her net worth, so it’s not fully understood just exactly how big her bank account itself is. What is understood is that if she were to need money at a fairly rapid pace, she has a lot of assets at her disposal that she could choose to liquidate. However, money doesn’t seem to be a problem for her so many people speculate that her bank account is fairly large. If you really wanted to break it all down, you could track all of the property she owns and then determine the worth of each one, but most people are willing to take the net worth of $120 million at face value and leave it at that.

Her Husband’s Portfolio & Net Worth

According to CNW, thanks to Paul, the Pelosis own large stakes in companies like Facebook, Apple, Comcast, Shutterfly and the Walt Disney Co. Paul Pelosi also owns a few office buildings in San Francisco and commercial properties around California. In 2009 Paul spent $10 million to buy the Oakland Invaders United Football League team. The team, which was soon relocated and renamed the Sacramento Mountain Lions, was eventually shut down. They have five children and eight grandchildren. When in San Francisco, the Pelosis reside in the Pacific Heights neighborhood of San Francisco.

Even today, she’s still one of the most polarizing political figures in America. She’s been extremely outspoken against individuals with whom she disagrees and as such, she’s had more than her fair share of shade thrown her way. Obviously, she is not a person that is easily intimidated, nor does she change her mind simply because someone else disagrees with her. It’s likely that those same qualities have also served her well in the real estate industry over the years. There is no doubt that she’s done something right or she wouldn’t have so many properties listed under her name to begin with. For those individuals that have the ability to stay in the game and the mental toughness to deal with whatever happens, real estate can indeed be a lucrative endeavor. That’s something that she has already proven time and again. Who knows how much more money she will make in the future?

In 2019, she regained the Speaker of the United States of Representatives position, making her not only the first but the only women to have ever held that position.  She’s as active as ever, sparring with current President Donald Trump.  We can only conclude that Pelosi’s net worth will continue to rise.  Will there ever be a tell all book?  Who knows.