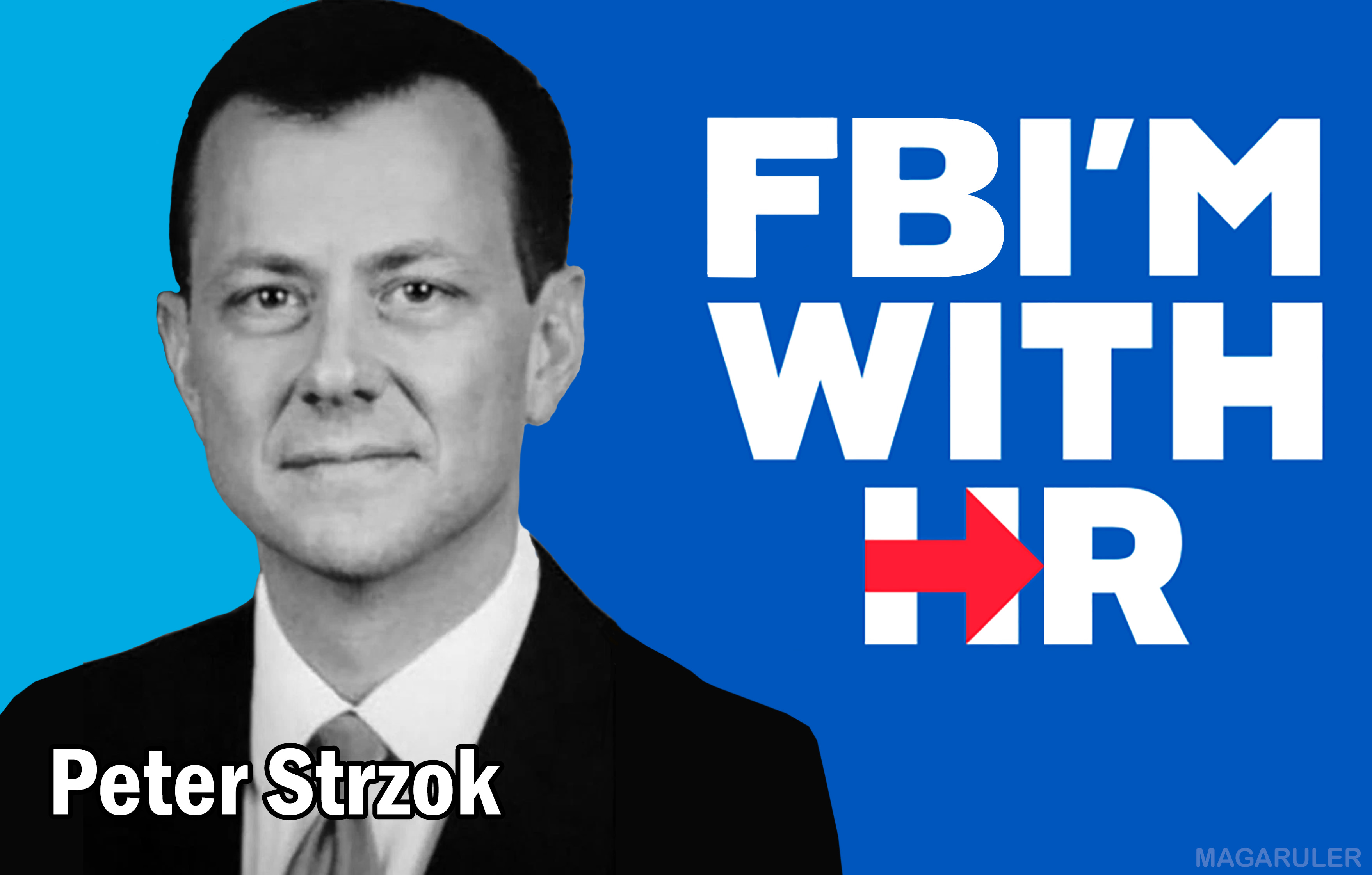 By now, most Americans paying attention have heard about Peter Strzok, one of the FBI’s lead investigators on the Hillary Clinton email case and the Trump – Russia collusion probe.  Strzok was second-in-command of counterintelligence at the FBI.  He, single-handedly, put a dark cloud over the integrity of the two investigations when it was recently disclosed that he had exchanged thousands of politically-charged text messages with his mistress, Lisa Page, a senior FBI attorney.  The couple used FBI-supplied cell phones to transmit and receive the text messages.  The House Judiciary Committee requested copies of all the text messages from the Department of Justice but only received a small fraction of them.
Numerous text messages show, in explicit detail, that Strzok and Page were big fans of Hillary Clinton during the time she was being investigated for violations of the Espionage Act and while she was campaigning to be president of the U.S.  The messages also show the utter contempt they had for Clinton’s opponent, Donald Trump.
When Robert Mueller, special prosecutor in the Trump – Russia collusion investigation, learned about the existence of these text messages last July, he removed Peter Strzok from his team of investigators.  Strzok was re-assigned to the FBI’s human resources department and is still on the payroll.
After the name of FBI agent Peter Strzok catapulted above the fold, we learned more about his wide-ranging assignments at the FBI.

Apparently, super-agent Peter Strzok was a very busy man at the Bureau and the go-to guy on high-profile cases involving political figures.
A senior investigator, who expresses extreme opinions about politicians while he is investigating them, degrades his ability to be objective.  One would have to be in deep denial to believe that Strzok’s political sentiments didn’t influence his handling of the Clinton case.  Strzok’s kid glove treatment of Clinton and her aides during their interviews and his edits of Comey’s draft exoneration document are completely consistent with his favorable political view of Clinton.
It boggles the mind to think that senior FBI officials, like Strzok and Page, would be foolish enough to leave an electronic trail of their political proclivities.  It is a gross understatement to say that they should have known better.  Apparently, they and others in the Department of Justice never thought such conflicts of interest would ever be exposed because they were thoroughly convinced Hillary Clinton would be the next president and their next boss.  They committed the mortal sin of presumption and are suffering the consequences.  Presumption coupled with a monumental lack of discretion increases the chances that a scandal will ensue and that’s exactly what happened in this case.
Although Peter Strzok was highly regarded within the Bureau, no one ever heard of him until he became an overnight media sensation along with his paramour, Lisa Page.  As damning as the flurry of text messages is to the probity of high-profile criminal investigations, it may only be the beginning salvo in a barrage of shattering revelations because there are thousands of his text messages that haven’t been released yet.  The small fraction that have been submitted to congress were partially redacted.  Judicial Watch, a conservative watchdog group, is also seeking Strzok’s text messages under the Freedom of Information Act.  And the House Judiciary Committee intends to subpoena Strzok to testify under oath.
The DOJ and the FBI have studiously resisted requests for information by claiming the matter is still under investigation or would compromise intelligence methods and sources, if the records were released.  They say Justice Department Inspector General, Michael Horowitz, is reviewing the FBI’s handling of investigations relating to the presidential election.  Therefore, DOJ officials say congress will have to wait until the IG’s review is finished, giving the IG precedence over congressional oversight.  The extreme reluctance of the DOJ and the FBI to be forthcoming seems to be motivated by a sense of self-preservation more than anything else given the can of worms Strzok’s text messages has opened.  This thing could easily metastasize into a mega-scandal that undermines our justice system at its core.
At the center of this escalating controversy is Mr. Strzok, who is a veritable one-man band.  As the FBI’s lead investigator, the guy was all over the place.  When James Comey sought input on the draft Clinton exoneration letter, he solicited and accepted Strzok’s recommendations.  Strzok responded with a now-infamous turn-of-phrase.  He suggested that Comey change “grossly negligent” to “extremely careless” when describing Clinton’s handling of classified information.  Strzok also watered down Comey’s statement that it’s “reasonably likely that hostile actors gained access to then-Secretary of State Hillary Clinton’s private email account.”  Strzok thought it would be less harmful to say “possible” than “reasonably likely” when characterizing our enemies’ potential access to hacked classified information.
See investmentwatchblog.com/extremely-careless-or-grossly-negligent-an-fbi-conspiracy-to-obstruct-justice/
Despite being indiscrete with his political views, Peter Strzok appears to be a very bright individual whose counsel was avidly sought and valued by the top echelon of the FBI.  In this respect, he was a lot like Mark Fuhrman, who was the most alert detective on the OJ Simpson case, seemingly everywhere at the crime scenes.  Ultimately, Fuhrman was accused of being prejudiced against blacks and decided to take the Fifth during the Simpson trial.  Strzok may face a similar fate, except his biases run toward politics.
Like Forrest Gump, the slow-witted protagonist in the eponymous Academy Award winning film, Strzok was everywhere at defining points in the high-profile FBI investigations of a sitting president and a would-be president.  Unlike Forrest Gump, however, Strzok is anything but slow-witted.  Unfortunately, he let his political predilections affect his law enforcement duties, which is anathema to the bedrock principle of equal justice under the law.
If the bulk of Strzok’s text messages, when released, show that the FBI associates with whom he communicated had a similar rabid disdain or excessive adoration for those they were investigating, then the cases they were involved with would be tainted and compromised.  And the premier investigatory body in the world will be derided as the Federal Bureau of Indiscretion.
Honest rank-and-file FBI agents deserve better.  They shouldn’t have to report to corrupt leaders who play politics and sully the Bureau’s reputation.  If FBI agents see something, they should say something.  The evidence and only the evidence should dictate how the law is applied.  To do otherwise is a travesty of justice.

See also  Federal Reserve’s plan is to raise rates and QT aggressively, crash the market, then step in and ease when inflation is down to prevent a 1929 type of depression. Don’t fight the FED.
See also  James O’Keefe strikes again…
Help Support Independent Media, Please Donate or Subscribe: Trending: Views: 6

4 thoughts on “The Federal Bureau of Indiscretion”