In 2016, rather than successfully hunting down terrorists including Mueller’s captors, Obama and his top national security officials hunted down Trump campaign aides. Baghdadi’s death should be a reminder—an infuriating one at that—of how the Obama administration, particularly the CIA and FBI, squandered vital resources in service to a politically motivated investigation into Trump and his presidential campaign rather than focusing their efforts on the legitimate threats facing the country.

Trump alluded to that malfeasance in his press conference on Sunday. “When we use our intelligence correctly, what we can do is incredible,” Trump said while commending intelligence operatives who helped locate the ISIS madman. “When we waste our time with intelligence that hurts our country because we had poor leadership at the top, that’s not good.”

Trump, of course, was referring to former CIA Director John Brennan, former Director of National Intelligence James Clapper, and former FBI Director James Comey, the “Praetorian Guard” that laid the trap for Team Trump in 2016. As ISIS continued its murderous rampage in the Middle East and parts of Europe that year—including the Bastille Day truck attack in France that killed 86 people and wounded hundreds more—the most powerful intelligence professionals in the United States were surveilling Carter Page and George Papadopoulos.

Watergate x 1,000,000.
Public hangings are LONG overdue.
Impeachment is a distraction from the coming indictments of the major players.

WELL, THAT DOESN’T FIT THE NARRATIVE: Tom Brokaw: Democrats don’t have ‘the goods’ on Trump as they did with Nixon. 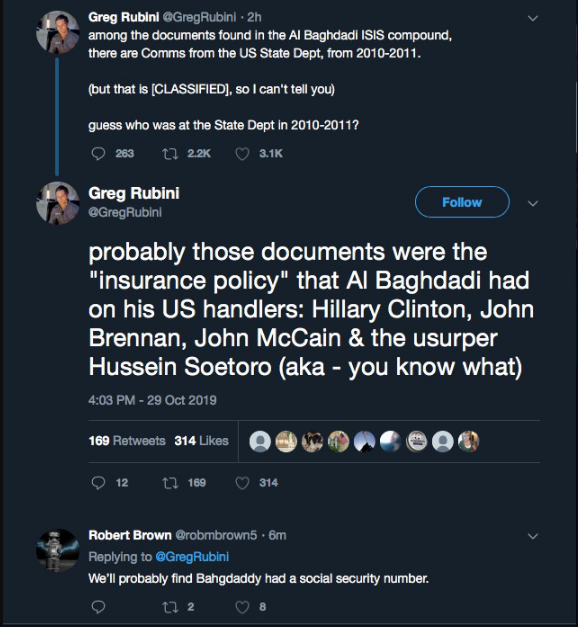