Today we hazard a thumping prediction:

Yes… the Federal Reserve will soon be clearing for emergency action.

When precisely can you expect it? And why the urgency?

Answers shortly. Let us first squint in on Wall Street…

The Bears Win on Points

A humdrum performance altogether, this day put in.

But when can you expect the next round of authentic quantitative easing… and why so soon?

We must first distinguish between official quantitative easing and its junior shadow, “QE-lite”…

The Difference Between QE and QE-lite

Quantitative easing had a strategic vision. That is, it was intended to stimulate.

And so it stomped mercilessly upon long-term interest rates… and battered them down to nothing.

It is workaday… and technical. It simply fills a leakage somewhere within the financial plumbing.

It consists of mere “open market operations” the Federal Reserve has always conducted.

And it fixes upon short-term rates — unlike quantitative easing. Its mission is therefore limited.

The Federal Reserve initiated QE-lite in September, when liquidity ran dry in the short-term lending markets.

They are still hard at the business — and inflating the balance sheet beautifully.

The Federal Reserve’s balance sheet came in at $3.8 trillion in September. Yet it presently expands to $4.07 trillion. 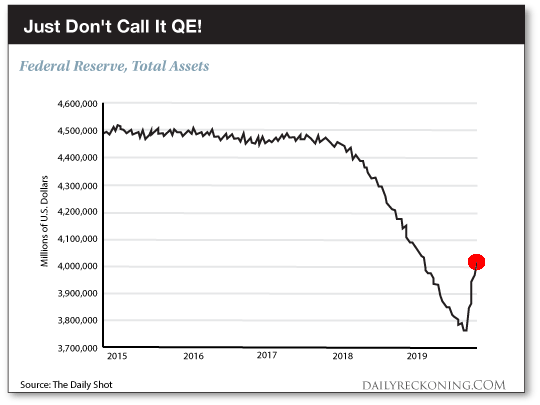 Yet we are assured none of it has seeped into the central water lines of the stock exchanges.

There is little debate that the Fed is increasing the quantity of money, or Q. However… the additional money lacks a direct transmission mechanism to the equity markets or other long-duration risk assets.

Just so. QE-lite nonetheless expands the Federal Reserve’s balance sheet, as shown. And the balance sheet is the central scene of action.

Is it coincidence the major indexes have established fresh records recently?

As we noted last week:

The S&P turned in only one negative week these past two months. That was the same week — and the only week — that the balance sheet contracted.

Yet independent inspectors are far from convinced. Some see not patched leaks — but ongoing hemorrhagings…

The big-picture answer is that the repo market is broken. They are essentially medicating the market into submission. But this is not a long-term solution… This is now far bigger than anyone thought this was going to be. I think they’re hoping the market will magically fix itself. I don’t see why it would.

And they will run “at least into the second quarter” of 2020… by Mr. Powell’s own admission.

We bet high they will go into the third quarter of 2020. And likely the fourth.

But why have the Federal Reserve’s heroic floods of liquidity failed to fill the pipes?

Here is the likely answer:

It can pump in its liquid. And it has. But it cannot guarantee it sloshes on through to its intended destination.

Clogs may bottle it up.

The Clogs in the System

We first must understand the repo market piping. Explains Reuters:

In a repo trade, Wall Street firms and banks offer U.S. Treasuries and other high-quality securities as collateral to raise cash, often just overnight, to finance their trading and lending. The next day, borrowers repay the loans plus what is typically a nominal rate of interest and get their bonds back. In other words, they repurchase, or repo, the bonds.

That is, they transact directly with the Federal Reserve. From these primary dealers the liquidity goes sluicing out through the repo market.

Yet these banks have evidently chosen to sit on their supplies… rather than lend them to thirsting recipients.

Our minions inform us that over 70 financial institutions presently go without.

The Bank for International Settlements (BIS) has reached the same conclusion.

BIS fingers four banks in particular. Yet it failed to identify the culprits… for what it is worth to you.

But why are these bloated and hoggish banks refusing to lend as needed?

Here is why they decline to put loanable funds on offer:

They can store their hoards at the Federal Reserve instead — where they earn a superior interest.

Bryce Doty, is a senior portfolio manager at Sit Fixed Income. From whom:

The big banks are just hoarding cash. They told the Fed they have more than enough cash in excess reserves to meet regulatory issues, but they prefer having money at the Fed where they can still earn 1.55%, rather than in the repo market.

In addition, elevated post-crisis capital requirements incentivize banks to pile up reserves rather than loan them.

So concludes our brief canvas of the repo market… and its present woes.

Yet we promised a prediction at the outset… that the Federal Reserve will soon undertake the next official round of quantitative easing.

We now gaze into our polished, haze-free crystal sphere for the answer…

The Federal Reserve will initiate the next official round of quantitative easing — QE4 — before this year runs out.

This is actually the near-prediction of Credit Suisse analyst Zoltan Pozsar.

Here is the hinge upon which it rests:

Whether or not the Federal Reserve loses control of overnight rates in the weeks ahead.

Mr. Pozsar has toiled for both the New York Federal Reserve and the United States Department of Treasury.

Thus he is exquisitely familiar with the financial plumbing. And this fellow believes the Federal Reserve’s patchwork has failed to plug the leaks.

Repo market funding remains unequal to requirements, he insists. Meantime, regulatory burdens on the primary banks are “shaping up to be a severe binding constraint.”

And so this Pozsar detects a main pipe groaning, rattling and giving… ready to rupture.

He believes the weeks ahead are “shaping up to be the worst in recent memory.” Moreover, he concludes “the markets are not pricing any of this.”

“If we’re right about funding stresses,” he concludes, “the Fed will be doing ‘QE4’ by year-end.”

But let us take this near-prediction, strip its escape clause, challenge its manhood and put steel in its spine:

The Federal Reserve will be doing “QE4” by year-end.

That is our prediction, presented with a wry grin. Let the countdown begin…