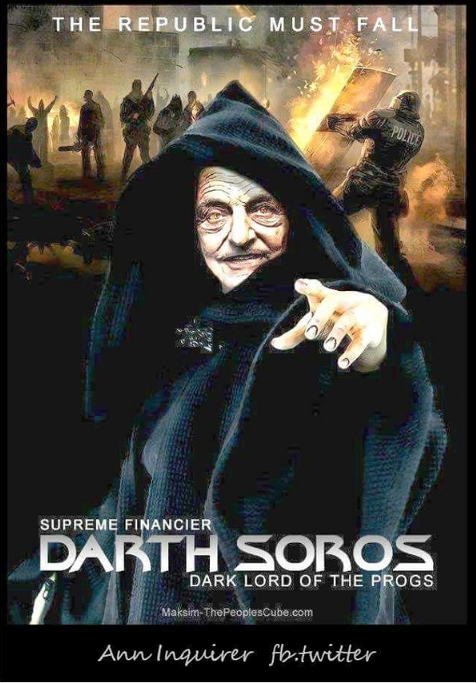 It’s nice to have a POTUS who doesn’t bow down to media pressure. Here’s President Trump on the issue of George Soros financing the so-called “migrant caravan” currently heading to El Norte:

“I don’t know who, but I wouldn’t be surprised. A lot of people say yes.”

TRUMP on whether GEORGE SOROS is funding the migrant caravan:

“I don’t know who, but I wouldn’t be surprised. A lot of people say yes.”pic.twitter.com/nnoAioG8SR

Here’s an interesting video which makes a strong point towards Soros-funded NGOs being the financiers behind the alien invaders from Guatemala, El Salvador and God knows where else:

This guy uses readily available (as in public) information, which convincingly points towards George Soros as one of the financiers of this alien invasion.

Trump made the comments while speaking to reporters outside the White House.

“George Soros? Who’s paying for it?” a reporter interjected.

“I don’t know who. But I wouldn’t be surprised,” Trump replied. “A lot of people say yes.”

A lot of people, indeed. Billionaire leftist intergalactic reptilian philanthropist or whatever, also known as George Soros, has made no secret about his personal inclinations towards flooding the West with untold numbers of migrants from the third world. And he’s putting a lot of his fortune where his mouth is:

Considering all these facts, it’s hard to accuse Trump of believing in so-called conspiracy theories. Moreover, if you remember the “refugee” invasion in Europe, well, Mr. Soros had all his fingers and toes into that pie. He said it himself, in the aforementioned op-ed in the WSJ.

See also  Something Smell About the Raid of Trump

Soros funded foundations/NGOs are also linked to garden-variety communist so-called revolutionary groups from Latin America, terrorist groups by any metrics by the way, as some of them, like La Raza (which means The Race, but only white people can be racist, so it’s okay) openly advertise their intentions of reconquering the US in the name of making Mexico great again, or something along these lines. George Soros also pours a lot of money into  The International Migration Initiative. To make a long story short, this program is aimed at flooding the US and Europe with immigrants from shithole countries. So, if you’re wondering who’s funding this invading caravan, George Soros comes to mind in like 2 seconds, provided you are familiar with his history. And if you’ve read the article thus far and followed the links, you’re already familiar with Soros’ philanthropy.

Don’t get me wrong: so far, the credible proof of George Soros’ involvement in this extravaganza is purely circumstantial, as expected from an open source investigation. Maybe some good people in Trump’s admin would like to take a closer look at who’s financing what. Remember, Soros is also funding domestic terrorist groups like BLM (black lives matter), pussy-marches and every other evil thing one can think of.

George Soros is also the person behind all the lobbying regarding opening “Russian meddling” investigations. Nigel Farage touches on it, when he announced he was opening an investigation into EU corruption regarding George Soros. To close on a happier note, here are the latest campaign videos released by The Donald for the midterms:

See also  Do You Miss Trump Yet? World War 3 Is Brewing!

It is outrageous what the Democrats are doing to our Country. Vote Republican now! t.co/0pWiwCHGbh pic.twitter.com/2crea9HF7G