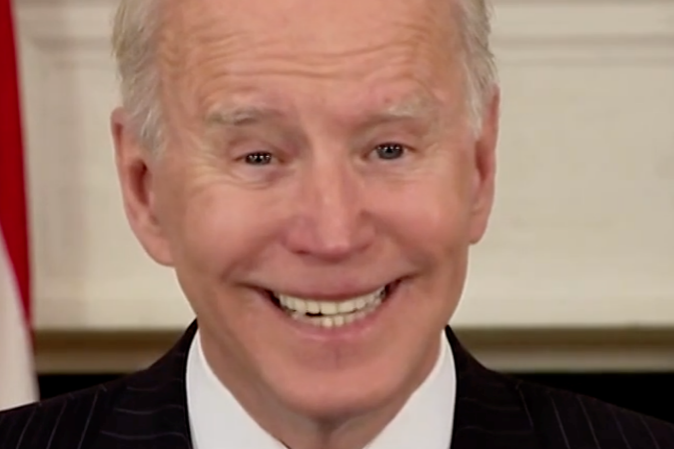 Did you hear the joyful news?

U.S. President Joe Biden on Tuesday moved up the COVID-19 vaccine eligibility target for all American adults to April 19, but warned that with new virus variants spreading “we’re still in a life-and-death race” with the coronavirus.

Biden directed states to widen the vaccine eligibility to people 18 or older by April 19, two weeks earlier than the May 1 deadline he announced previously. No COVID-19 vaccine is authorized yet for children under 16, although testing is underway.

Most U.S. states had already said they would open vaccines to all adults by that new target date.

“What we do now is going to determine how many people we’ll save or lose in the month of April and May, and June, before we get to July Fourth,” Biden said at a White House event.

More than 80% of teachers and school staff had received at least one vaccination shot, Biden said, but noted that variants of the coronavirus are spreading and generating a rise in cases.

“We aren’t at the finish line. We still have a lot of work to do. We’re still in a life-or-death race,” Biden said.

It’s funny to see how the so-called covid vaccine (gene therapy actually) is marketed like the PlayStation 5.

Basically, the powers that be are playing FOMO games, as in they are creating the illusion of scarcity and/or a supply shortage to lure the goyim into injecting mystery substances into their bodies.

The new propaganda plot is to claim that young people, who have a negligible chance to die from covid, provided such thing even exists, have been eagerly waiting for the vaccine, and now the Biden regime is giving them a kingly gift by letting them have it.

Obviously, the regime will start rolling vaccine passports as soon as it becomes available to everyone. They already told us that, and I mean the mainstream media. It’s called predictive programming. Check that out.

Saturday Night Live did a horrible song saying that it wasn’t fair that only the boomers got the vaccine.

Now they are saying that we have to vaccinate toddlers and small children. Even if no one actually believes children are at risk, they are pushing this stuff hard on the goyim. Did you ever read the actual quote on the Big Lie?

In this [the Jews] proceeded on the sound principle that the magnitude of a lie always contains a certain factor of credibility, since the great masses of the people in the very bottom of their hearts tend to be corrupted rather than consciously and purposely evil, and that, therefore, in view of the primitive simplicity of their minds, they more easily fall victim to a big lie than to a little one, since they themselves lie in little things, but would be ashamed of lies that were too big. Such a falsehood will never enter their heads, and they will not be able to believe in the possibility of such monstrous effrontery and infamous misrepresentation in others.

This is exactly what is happening with the covid hoax. The lie is just too big for normies to process it. The sars-cov2 thing, if it even exists (the virus has never been isolated), is the same as the flu, they just changed the name.

There are no extra deaths in 2020 and in 2021 in any Western country. The flu basically disappeared and all deaths are now put on covid’s tab. That’s all there is to it. There’s an article in Johns Hopkins that admits to that fact. It’s just that mainstream media is not reporting on “hate facts”:

From mid-March to mid-September, U.S. total deaths have reached 1.7 million, of which 200,000, or 12% of total deaths, are COVID-19-related. Instead of looking directly at COVID-19 deaths, Briand focused on total deaths per age group and per cause of death in the U.S. and used this information to shed light on the effects of COVID-19.

This trend is completely contrary to the pattern observed in all previous years. Interestingly, as depicted in the table below, the total decrease in deaths by other causes almost exactly equals the increase in deaths by COVID-19. This suggests, according to Briand, that the COVID-19 death toll is misleading. Briand believes that deaths due to heart diseases, respiratory diseases, influenza and pneumonia may instead be recategorized as being due to COVID-19.

See also  While vaccine certificates are rolled out NZ Ministry of Health says the vaccinated are more of a risk.

Briand also noted that 50,000 to 70,000 deaths are seen both before and after COVID-19, indicating that this number of deaths was normal long before COVID-19 emerged. Therefore, according to Briand, not only has COVID-19 had no effect on the percentage of deaths of older people, but it has also not increased the total number of deaths.

These data analyses suggest that in contrast to most people’s assumptions, the number of deaths by COVID-19 is not alarming. In fact, it has relatively no effect on deaths in the United States.

In so many words, this is an absolute admission that the entire thing is a hoax. Part of this hoax was about collapsing the economy, part of it was about taking all your freedoms away.

But this vaccine is also a part of it, for reasons we don’t really understand yet. They are clearly obsessed with getting every single person on earth to take this vaccine – for some reason.

I wonder if @Facebook will remove this video of Mark Zuckerberg? #ExposeZuck pic.twitter.com/OxRzlW7JWj

The problem is that most people are complete idiots. They also turn to The News for “facts”.

The news has been lying about Covid since day one.

To be infected by anything, you need prolonged exposure. The reason why old people get sick is because their immune systems are breaking down. Their lymphatic system can no longer kill off cancer cells. Bacterial colonies grow unchecked. Your muscles break down, and your brain turns to jelly.

That is why we grow old and die.

Of course kids today are learning that nobody ever died before Covid. Things like heart attacks, strokes, sepsis, and cancer are fairy tales. Covid is the only killer of man.

That means that 99.9% of people you come in contact with aren’t positive. Considering above 90% of cases are false positive, with a pretty good chance of 100%, the actual chance of coming in contact with a person that is actually infectious is maybe .001%.

I think it is pretty safe to go out without a mask.

I call absolute BS on the Barnstable “variant” case. So the “Brazil” variant just happens to infect a single woman in Cape Cod that probably showers with a mask on? How did she come into contact with someone from Brazil? Let me guess, Johns Hopkins confirmed it.

Just like the B117 case that appeared out of nowhere in Columbus Ohio without the person ever being in contact with anyone from England, and not traveling anywhere outside Columbus.

At this point if you don’t realize that the entire Covid hoax is nothing but a computer simulation run by Johns Hopkins, with the results reported as real, there isn’t any hope for you.