The video below of Hillary Clinton discussing why we should get rid of the electoral college will have you screaming…Thank goodness for the Electoral College! If we didn’t have it, Hillary would be president and all of our elections would be decided by three states! Hillary needs a civics lesson before she spews more sour grapes about why we need to get rid of the Electoral College.

Because three states could win the election every time, the electoral college was put into the constitution to make sure the smaller states wouldn’t be perpetual slaves to the desires of a few high population states. 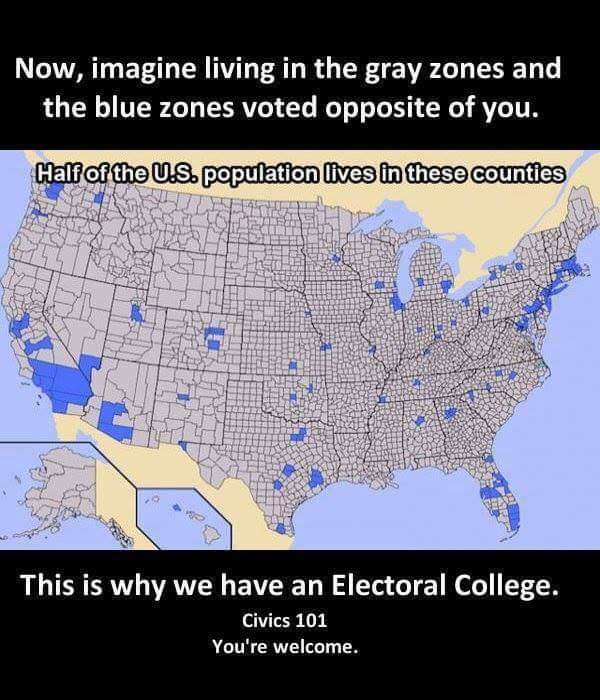 Hillary Clinton continued to attack the Electoral College system used to elect U.S. presidents on Friday, calling it an “odd system” and contrary to the idea of “one person, one vote.”

“I know this is another really obvious thing to say. Vote in every election, not just presidential elections,” Clinton said at Harvard University, in a clip flagged by NTK Network. “You know, it is maddening because one of the panelists said we get the government that we vote for. Now, we have this odd system with the Electoral College.”

Clinton defeated Donald Trump in the popular vote by nearly three million votes in the 2016 presidential election, but she only won 227 electoral votes to Trump’s 304 en route to her defeat. Trump won 30 states and dominated the middle of the country, while Clinton won handily on the coasts and ran up huge margins of victory in California and New York.

Clinton called the roots of the Electoral College system “a little troubling.”

“But nevertheless, we’ve got it. I’ve been against it, by the way, since 2000,” Clinton said. “Not that you need to know that … I have been, because I just think it is absolutely contrary to ‘one person, one vote.’”

Clinton said last year that the system needs to be eliminated.

“I think it needs to be eliminated. I’d like to see us move beyond it, yes,” she told CNN host Anderson Cooper.

Remember during the 2016 campaign when Hillary and Trump discussed if they would accept the election results? Did she not have a chance during that moment or anytime during the campaign to address the electoral college? She didn’t say a word because she was sure she’d win!