I’m not buying the dip in stocks—and neither should you.

Investors passed this off as a sign the correction is over. This is wishful thinking.

The main worry behind this sell-off was higher interest rates. But they have only just started to take effect on the economy.

Since December 2015, the Fed has hiked six times. They signal two more times this year.

That tells me there is more danger ahead for stock investors.

When interest rates are low, money is cheap. Businesses borrow money and expand at a small cost.

Conversely, when rates are higher, it costs more to a run a company. This lowers a company’s earnings and drags down its stock price.

A study from Bridgeway Capital Management showed that after interest rates fall, the long-term average return on the S&P 500 is 13.3%.

Meanwhile, when interest rates rise, the S&P 500 return is almost half that figure.

Rising interest rates are not kind to stocks. That’s a fact. And businesses addicted to cheap credit will be even worse off.

REITs Have a Target on Their Backs

Some of the most vulnerable industries today are:

REITs are known for paying generous dividends. Many of them offer yields of 6% or more.

That looks very tempting. But owning a REIT can be dangerous when rates are rising.

The thing is, they won’t be able to pay those tempting dividends much longer.

REITs own and operate income-producing real estate. These properties range from apartment buildings to hospitals, shopping centers, and hotels.

An REIT grows its business by borrowing money and buying more property.

Caught in the Rising Rate Crossfire

When interest rates are low, an REIT’s finance costs are lower and its profits are higher. That enables it to pay a fat dividend.

From January 2009 to December 2015, interest rates were at their lowest levels ever. During this period, the iShares Cohen and Steers REIT ETF (ICF) handed investors a 164.7% return.

But times have changed.

The Fed ended cheap credit in December 2015. And just like that, REITs have lagged the S&P 500: 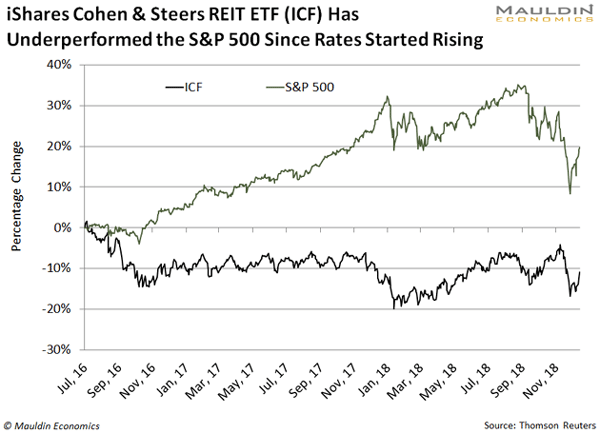 That’s why I’ll steer clear of REITs. And if I were you, I’d do the same.

Coca-Cola Is a Classic All-Weather Stock

Heck, Coca-Cola has enough cash in the bank to fund its business for two years. And it can do so without any additional revenue. 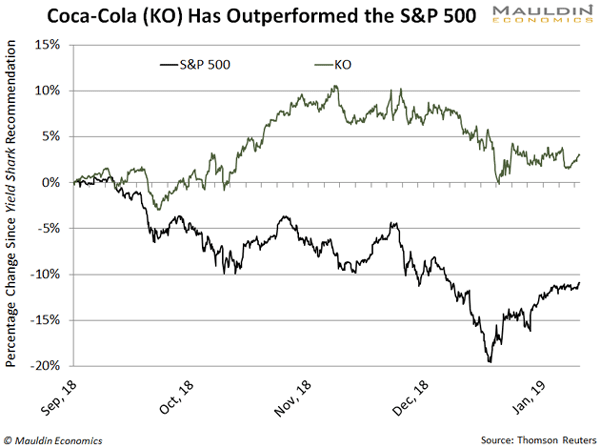 Coca-Cola is immune to rising rates. And the strength of its shares during the recent sell-off proves it.