Because if the BLS didn’t do this we might actually see that inflation is exploding higher.

This is not conspiracy theory, it is fact. And if you don’t believe me, consider what the homebuilder industry is saying about house prices.

While demand and homebuilding remain solid, the industry is not without its challenges. Construction companies cite a shortage of workers, rising costs for lumber and other building materials and a scarcity of available lots on which to start new projects. Affordability is also becoming a bigger issue as gains in property values outpace income growth and interest rates rise.

What do you call it when an asset price that people need rises in value faster than their incomes?

Sales at gasoline stations were up almost 12% in April compared to one year ago, reflecting a runup in oil prices that began last summer and accelerated in 2018. The cost of a barrel of oil has climbed above $70 from $45, and it could head higher still with the summer driving season straight ahead. Put another way, Americans shelled out an extra $4.4 billion for gasoline last month than they did in April 2017, according the government’s latest report on retail sales.

What do you call it when oil prices rise rapidly resulting in higher energy costs for Americans?

Our options trading system is on a HOT streak, having locked in SEVEN double digit winners in the last four weeks.

Best of all, this system couldn’t be easier: we only trade one trade, once per week… and we’re CRUSHING the market.

To join us today, take out a 60 day trial subscription.

If you’re not seeing SERIOUS returns within the first 60 days, we’ll issue a full refund, NO QUESTIONS ASKED.

Everywhere you look today, we are seeing signs that inflation is tearing higher. Indeed, the bond market is in an absolutely revolt as yields soar higher to try to match inflation’s rise.

As I write this, the yields on Germany’s, the United States’, and Japan’s fovernment bonds are ALL breaking out to the upside having broken multi-year trendlines. 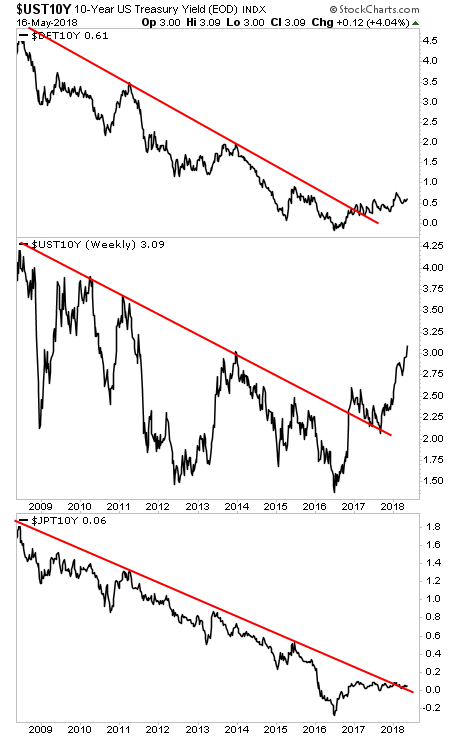 This is a MASSIVE deal. It is telling us that it is getting harder and harder for these countries to service their debt loads.

The bond bubble is now well north of $200 trillion. And ALL of this requires bond yields staying LOW in order for it to work

When the Bond Bubble bursts, the EVERYTHING bubble follows.

It will take time for this to unfold, but as I recently told clients, we’re currently in “late 2007” for the coming crisis.

It will be available exclusively to our clients. If you’d like to have a copy delivered to your inbox when it’s completed, you can join the wait-list here: