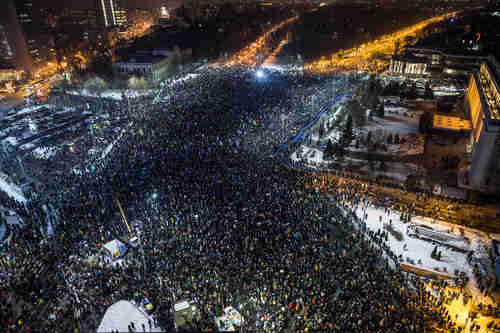 Once again, tens of thousands of Romanians have taken to the streets demanding the end of corruption in government. At least 450 people were injured in clashes with the police who are still defending the government against the people. We are looking at a worldwide epidemic of corruption in government that has known no bounds. This is part of the very reason why Trump was able to beat every career politician. But like Erdogan, those in power refuse to ever admit that they are the reason for the political changes.

Unfortunately, in the United States, we not only have the police defending the government, we also have the press like CNN, Washington Post, and the New York Times. All they do is try to overthrown Trump instead of looking at the system and WHY he was elected to begin with. They are all supporting the inherent corruption because they like things as they are. What we are witnessing in Romania is also unfolding in Germany, Italy, France, Spain, Malaysia, and even in Britain. This is a worldwide political change in trend and we really have to begin to look at the trend and not just the face of Trump.