Over the past few days we have seen the expected height of summer lull punctured by events in Turkey. This morning there has been a signal that this has become a wider crisis as our measure of this the Japanese Yen has rallied to 110.2 versus the US Dollar. It has pushed the Euro down 1.2 to 125.3 Yen as well. That sets the tone for equity markets as well via its inverse relationship with the Nikkei 225 equity index which was done 414 points at 21884. Another more domestic sign is the search for scapegoats or as they are called these days financial terrorists.

The most amusing response to this I have seen is that they should start with @realdonaldtrump.

Essentially the dam broke on the exchange rate on Friday. In the early hours it was trading at 5.6 versus the US Dollar then as Paul Simon would put it the Lira began “slip sliding away” . Then the man who may well now be financial terrorist number one put the boot in showing that he will to coin a phrase kick a man when he is down.

I have just authorized a doubling of Tariffs on Steel and Aluminum with respect to Turkey as their currency, the Turkish Lira, slides rapidly downward against our very strong Dollar! Aluminum will now be 20% and Steel 50%. Our relations with Turkey are not good at this time!

It was time to finish with Paul Simon and replace him with “trouble,trouble,trouble” by Taylor Swift as the already weak Turkish Lira plunged into the high sixes versus the US Dollar. As ever there is doubt as to the exact bottom but it closed just below 6.5 so in a broad sweep we are looking at a 16% fall on the day. Last night in the thin Pacific markets it quickly went above 7 and if my chart if any guide ( 7.2 was reported at the time) the drop went to 7.13. So another sign of a currency crisis is ticked off as we note the doubt over various levels but if course the trend was very clear.

There were various speeches whilst mostly seemed to be calling for divine intervention. This seemed to remind people even more of a company which of course famously claimed to be doing God’s work. 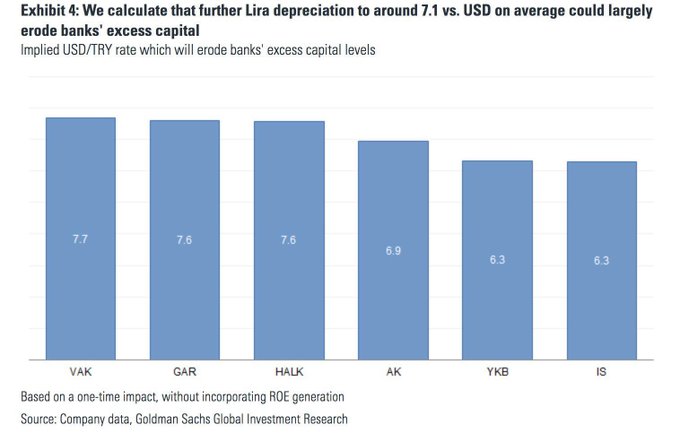 The particular target of 7.1 had seemed so far away when it was pointed out but suddenly it was near on Friday and exceeded overnight. As ever when there are challenges to the “precious” there is an immediate response from the authorities.

To support effective functioning of financial markets and flexibility of the banks in their liquidity management;

That was from the central bank or CBRT which estimated the benefit as being this.

I guess it felt it had to start with the Turkish Lira element but these days that is the smaller part. This also adds to the action last Monday which added some 2.2 billion US Dollars of liquidity. So more today and an explicit mention of a Turkish Lira element.

See also  75% of middle-class households say their income is falling behind the cost of living.

There was also a press release on financial markets which did at one point more explicitly touch on the foreign exchange market.

3) Collateral FX deposit limits for Turkish lira transactions of banks have been raised to 20 billion euros from 7,2 billion euros.

This did help for a while as the Turkish Lira went back to Friday’s close but it has not lasted as it is 6.83 versus the US Dollar as I type this.

The ordinary person is already being hit by the past currency falls and now will see inflation head even higher than the 15.85% reported in July.  There was some extra on the way as the producer price index rose to 25% but of course that is behind the times now. The author Louis Fishman who writes about Turkey crunched some numbers.

For a while there will be two situations as foreign goods get much more expensive and domestic ones may not. But as we have noted with the inflation data over time domestic prices rise too.

We have note before the foreign currency borrowing in Turkey which will be feeling like a noose around the neck of some companies right now. From the 13th of July/

Since 2003 $95bn has been invested into the country’s energy sector, of which $51bn remains to be paid. This figure represents 15% of the $340bn owed by non-financial companies in overseas liabilities, according to data from the nation’s central bank. ( Power Technology)

So there will be increasing foreign currency stresses as well as bank stresses in the system right now. The financial chain will be under a lot of strain as we wait to see what turns out to be the weakest link. So far today bank share prices have fallen by around 10% and of course that is in Turkish Lira.

As ever we start with the banks where in terms of scale the situation is led by the Spanish and then the French banks with BBVA and BNP being singled out. Italy is under pressure too via Unicredit but this is more that it had troubles in the first place rather than being at the top of the list. There is some UK risk but so far the accident prone RBS does not seem to have been especially involved in this particular accident.

Wider still we have seen currency moves with the US Dollar higher but the peak so far seems to be the South African Rand which has fallen over 3% at one point today adding to past falls. Of course again there is a chain here around various financial markets as we wait to see if anything breaks.

These situations require some perspective as it is easy to get too caught up in the melee. So let us go back to the 8th of June 2015 where we looked at this.

Turkey’s lira weakened to an all-time low……..The currency tumbled as much as 5.2 percent…….The lira dropped the most since October 2008 on a closing basis to 2.8096 per dollar……..The Borsa Istanbul 100 Index sank 8.2 percent at the open of trading.

So we have an economy which has chosen economic growth as its policy aim and it has ignored inflation and trade issues.

Since then Turkey has seen sustained inflation and trade problems leading us to the source of where we are now. I see more than a few blaming the tightening of US monetary policy and what is called QT as drivers here but I think they are tactical additions on a strategic trend which is better illustrated by this from the 13th of July.

Turkey’s annual current account deficit in 2017 was around $47.3 billion, compared to the previous year’s figure of $33.1 billion.

As ever if you get ahead of the rush you can feel good as these from the 3rd of May highlight from Lionel Barber.

Good market spot: Turks are buying gold to hedge against booming inflation and a falling currency

Which got this reply from Henry Pryor.

Or if you do not want to bother with the analysis just take note of the establishment view.