“I’m no expert, but I’m pretty sure you can inflate construction costs and launder money through it.” – Ozark 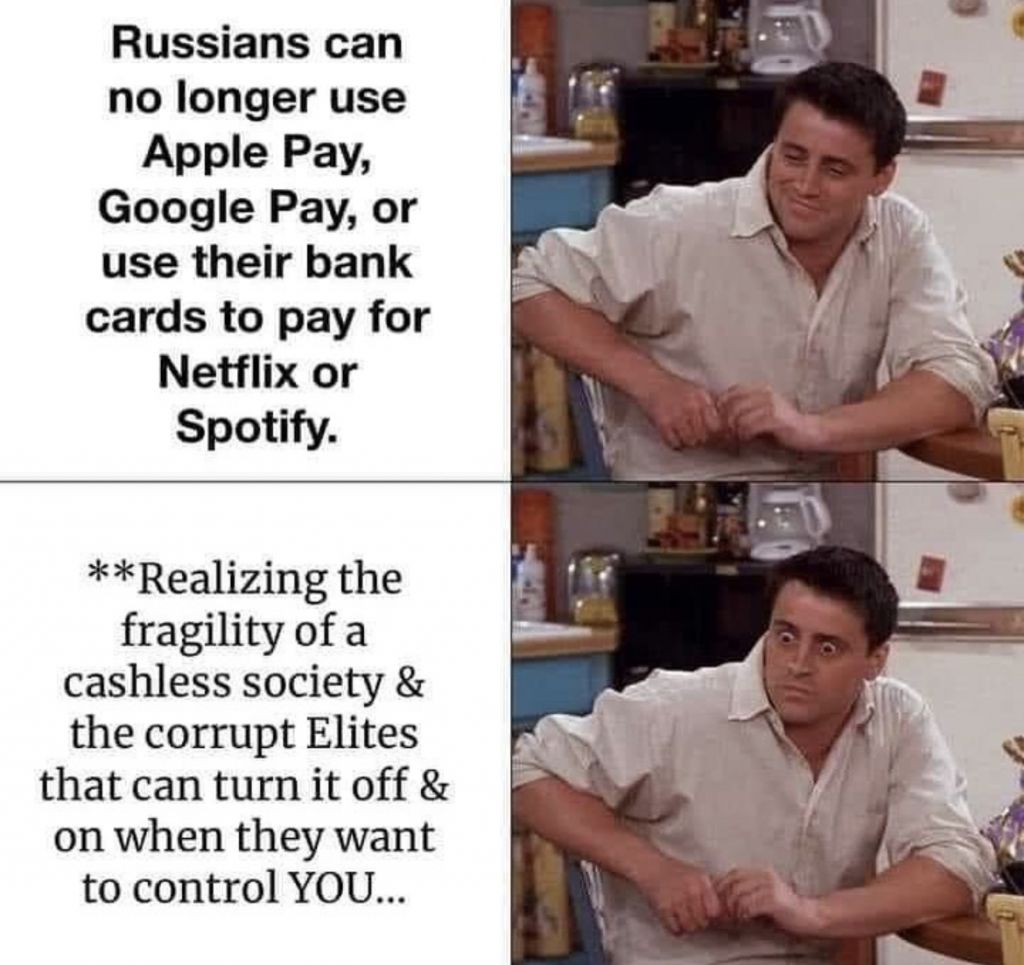 I wonder if everyone can figure out why China built their own Internet now?

Biden has miscalculated.  Again.  As he has his entire life.  He has moved from one miscalculation in his life to the next.  So, it’s not surprising that perhaps the greatest failure in the history of the United States has shown up on his watch.  Let’s go, Brandon, indeed.

To be fair, it’s not entirely Brandon’s fault.  The United States economy, as I’ve gone to great pains to show over my posts, has been hollowed out over the years.  We have gone from one that manufactures things and exports goods to one that mainly manufactures movies (we’re very good at that) and consulting and intellectual property and Starbucks™. 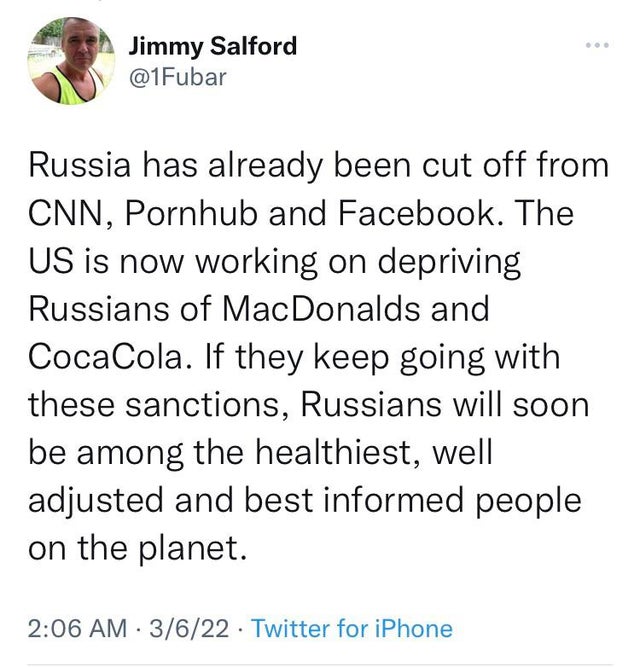 The thing that we’ve been best at is printing and then exporting dollars.  For decades now, we have been exporting dollars that we printed and then importing stuff like fidget spinners and PEZ®.  It was a great deal for us.  People used those dollars and we got stuff, but it was essentially a global tax on the rest of the world.

That ability to tax, however, only works as long as people believe that the dollar is worth something, and that the holder of that economic power won’t bend the rules.  Just like the bank runs up in Canada started when Trudeau broke the promise that the banks won’t steal people’s money, so the same principle applies to international affairs. 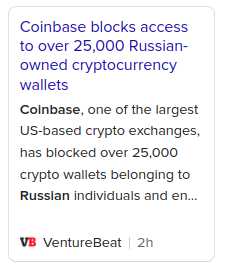 What could go wrong, stealing cash from random people? 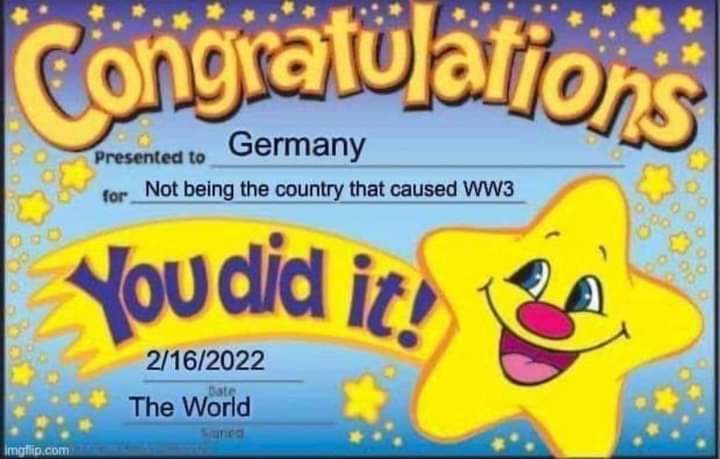 In almost every commodity listed above, Russia is in the top five exporting nations.  In several commodities, it is the world’s largest exporter.  Check out the graphs on energy and wheat when the market gets disrupted: 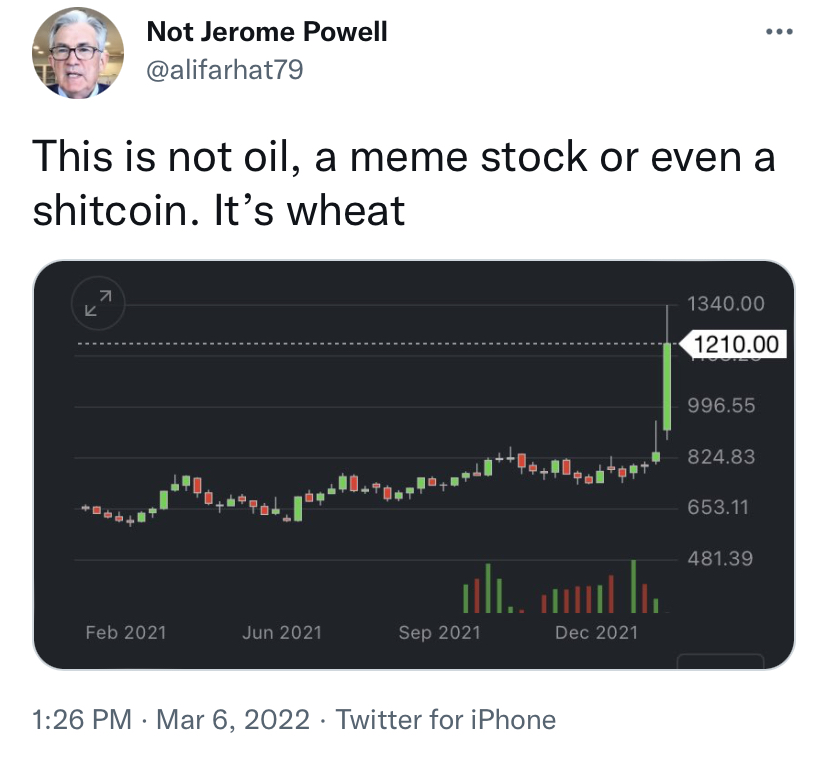 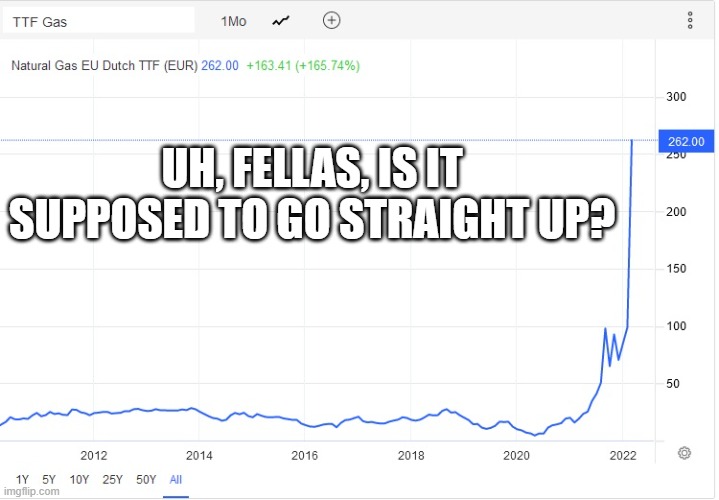 What does Russia import?

Russia also exports nearly double what it imports.  If there is a country that is nearly self-sufficient in this world, it’s Russia.  There is an economic concept called “autarky” – or a nationwide independence from imports.  Looking at the list of companies that are leaving Russia, well, could it be that Russia is better off without them? 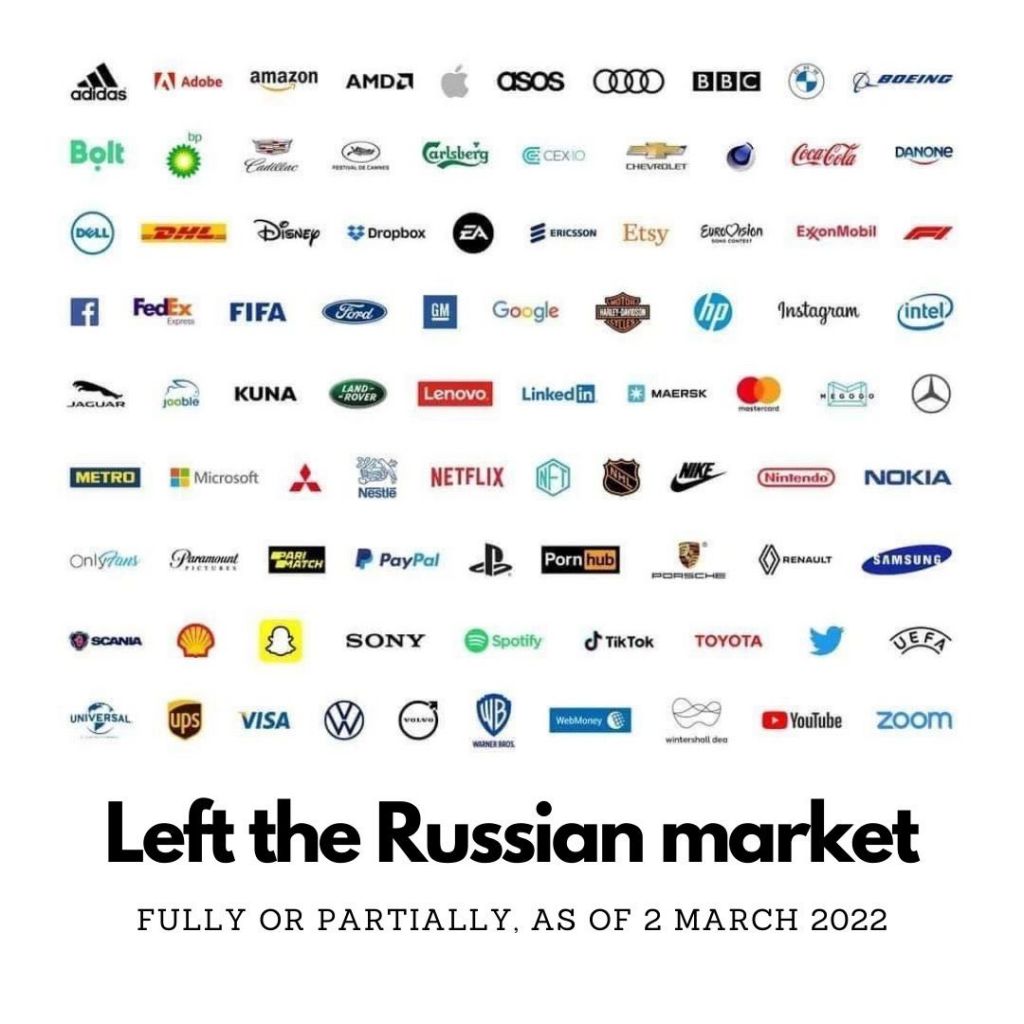 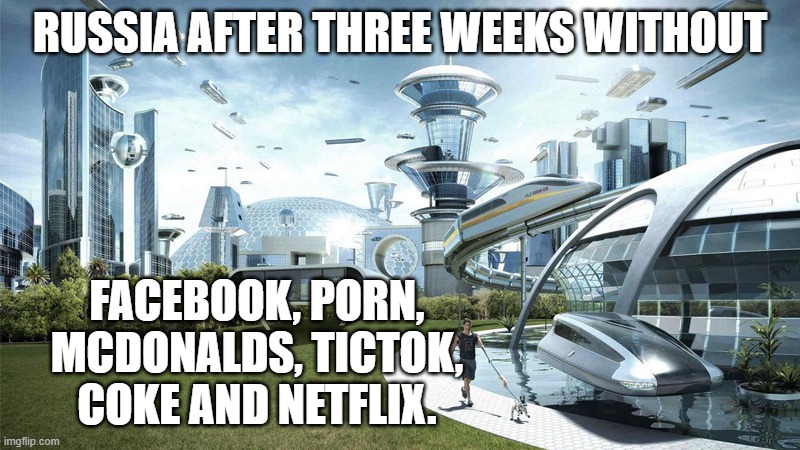 Russia isn’t independent.  But it’s close enough.  Most things that it is missing can be bought from either India or China.  No iPhones®?  China has a bunch of other kinds of phones.  And all those businesses that left?  It’s not like the Russians don’t know how to make hamburger and buns, so McPutins™ could open up tomorrow, though I’d skip the polonium sauce.

Russians are talking about nationalizing all of the assets of companies that have abandoned them.  Why wouldn’t a country do that?  Well, other countries could seize the overseas Russian assets.

Oops.  Too late.  So what’s stopping the Russians? 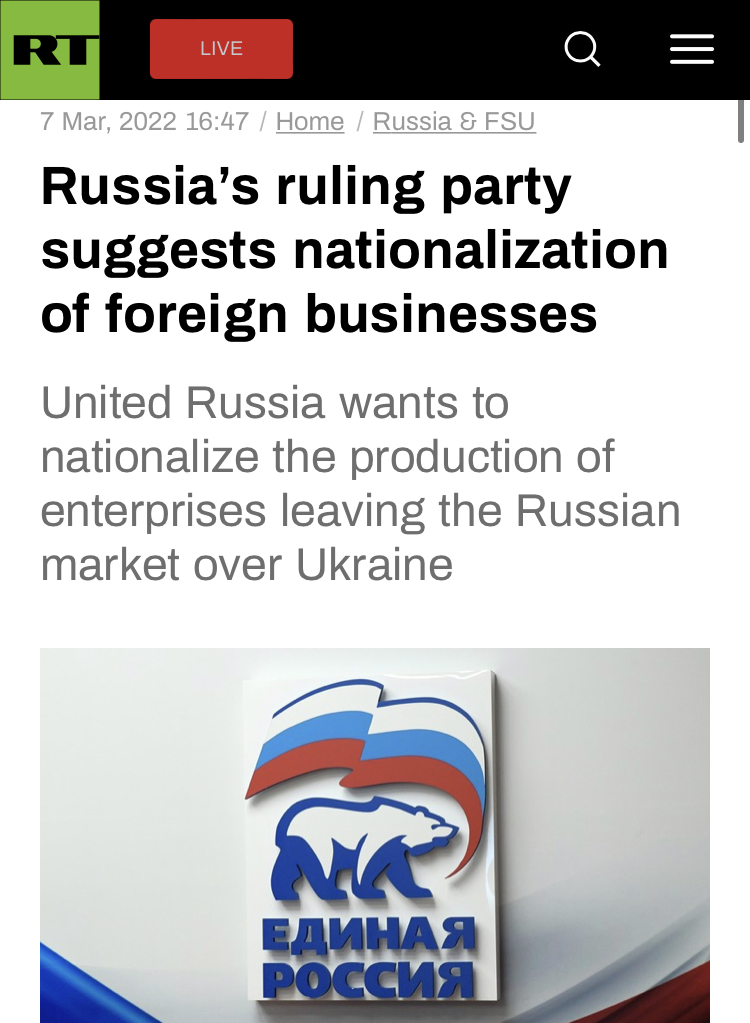 What is the threat from the West?  That Russian audiences won’t have Netflix®?  The things that Russia has been denied are, frankly, not very scary.  They won’t get to see the next Marvel© movie?  Oh, yeah, they also went after Russia’s money and tried to cut it off from the dollar-based economic system and . . . entertainment. 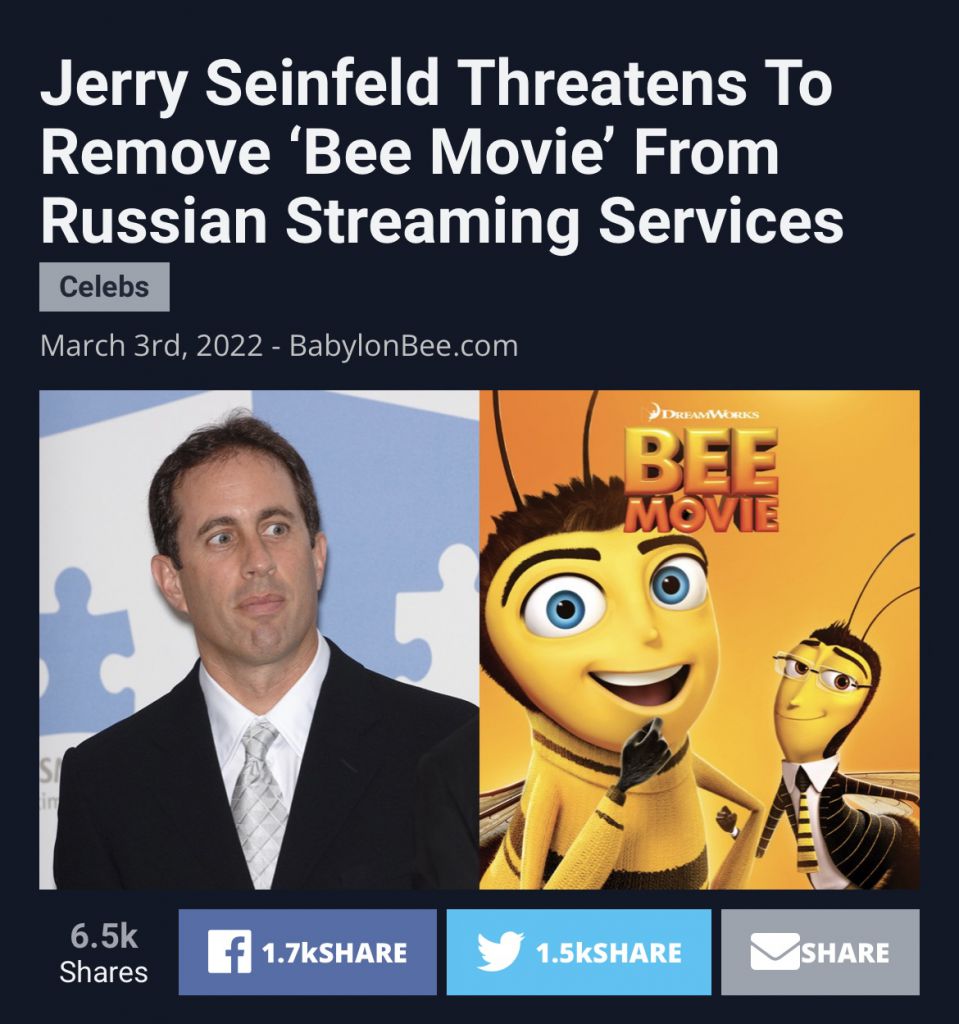 The Babylon Bee has the real impact figured out.

The tent collapses, and by that tent I mean the dollar.

I actually think that Joe’s head is so far up . . . well, I’ll be kind and guess that he has Alzheimer’s rather than being this stupid.  Oddly, this is viewed as an ideological opportunity by the Leftist henchxirs in Washington.  They hate fossil fuels to the point of not caring about the relative plight of the American consumer.  Don’t believe me?  Listen to them:

Why would we want to solve problems? 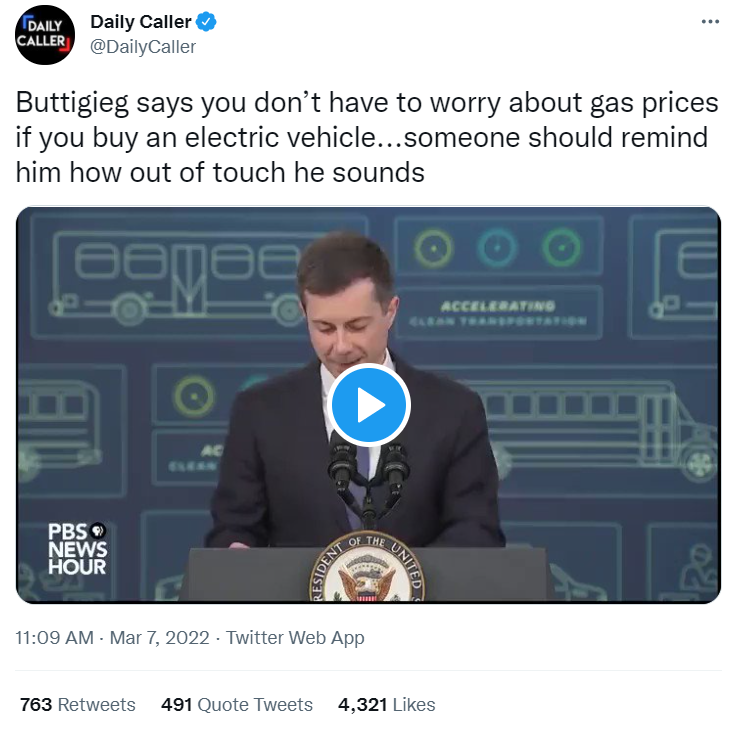 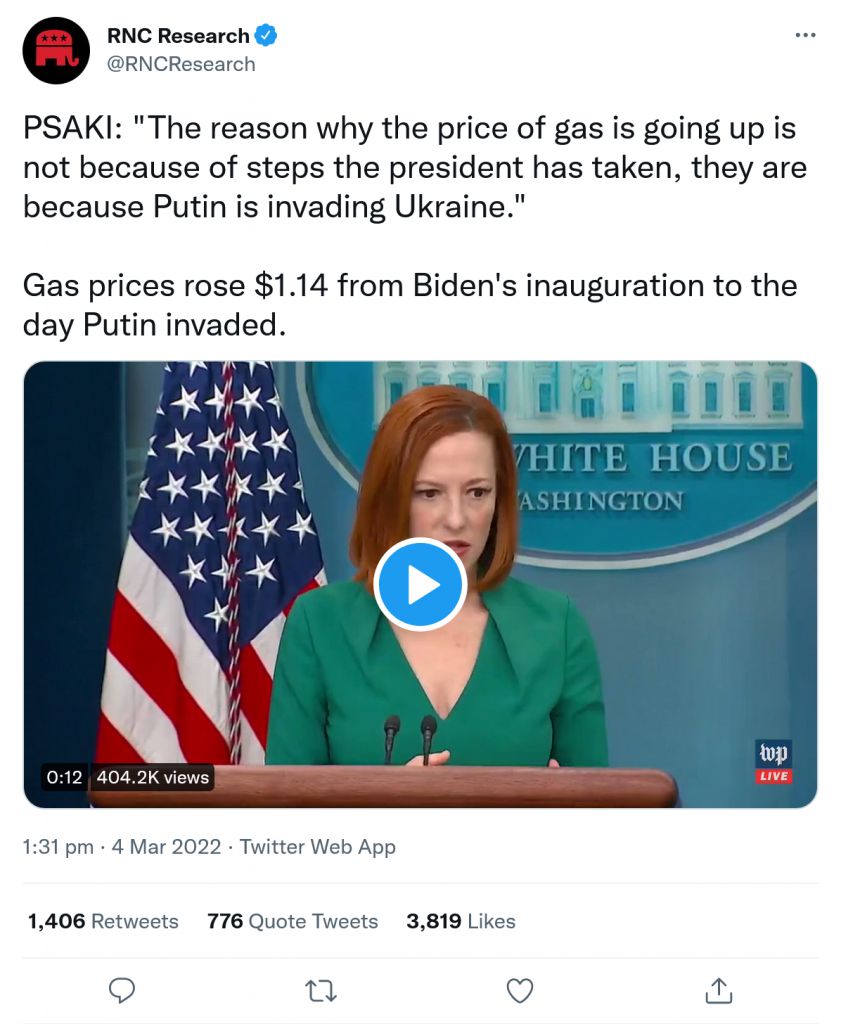 And Joe’s responsible for the invasion, too. 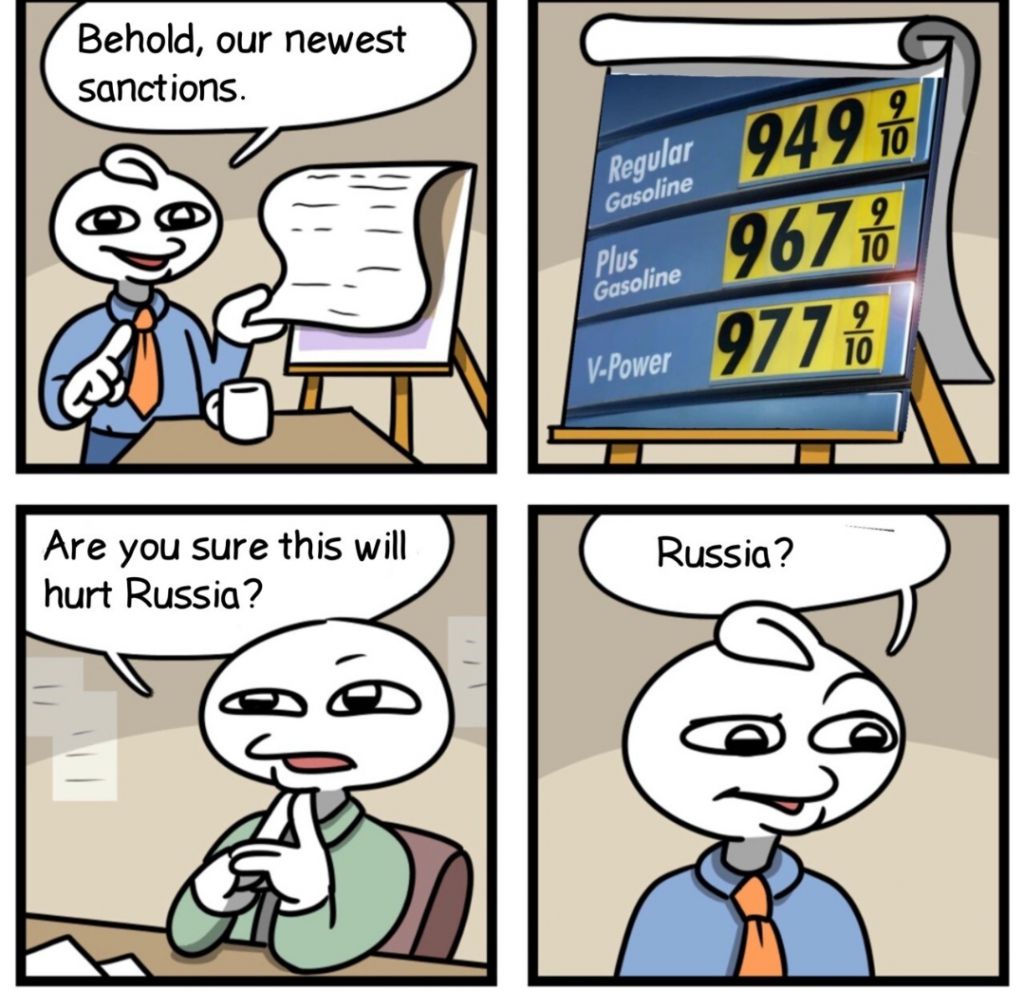 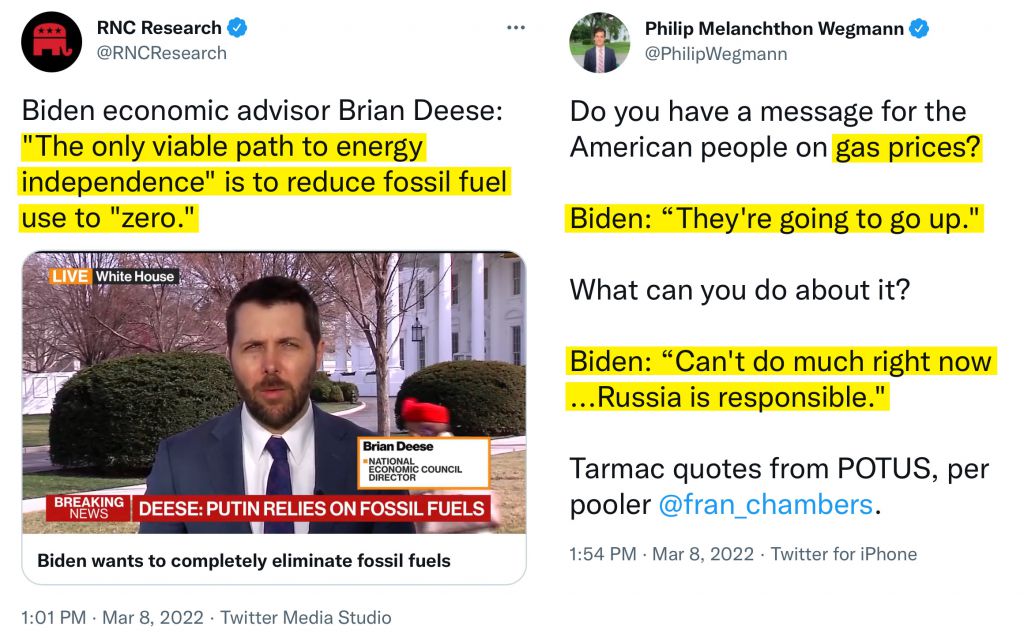 The goal.  No matter what it costs.

There are even well-meaning Lefties starting to write articles to cope with the failure: 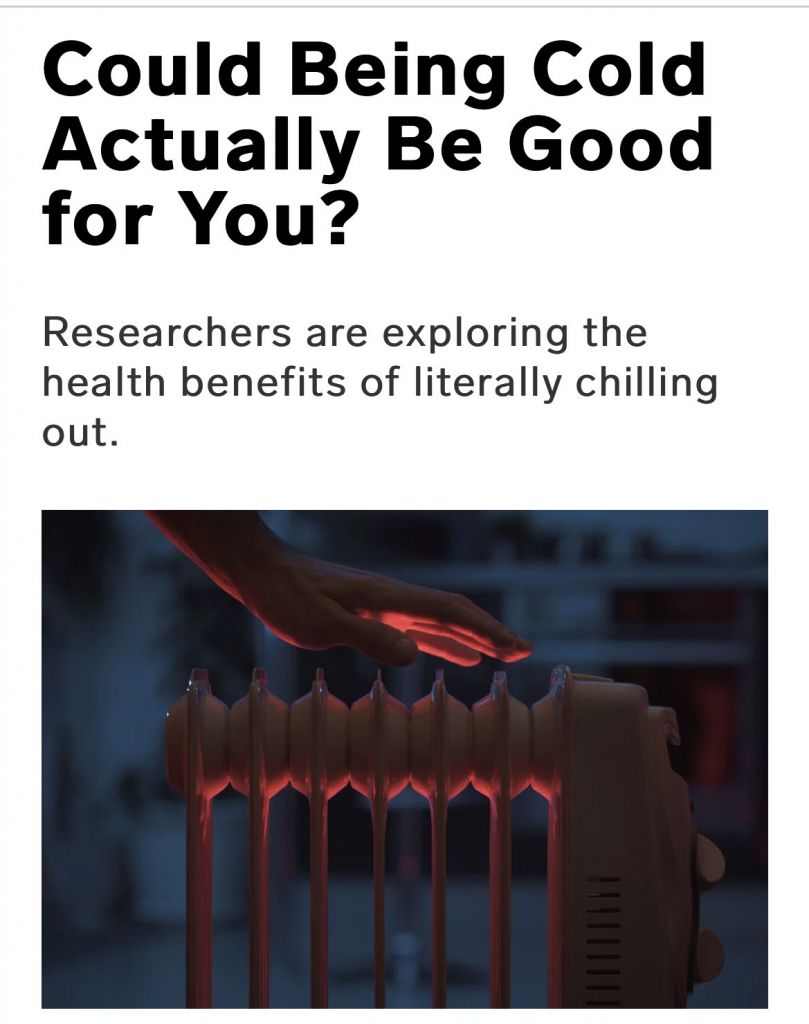 But here’s a sign:  Joe tried to get meetings with the Saudis and the very friendly folks over at the United Arab Emirates.  They wouldn’t return his calls.  Imagine:  a foreign leader refusing to even talk with the President* of the United States.  It’s almost like he’s a fraud? 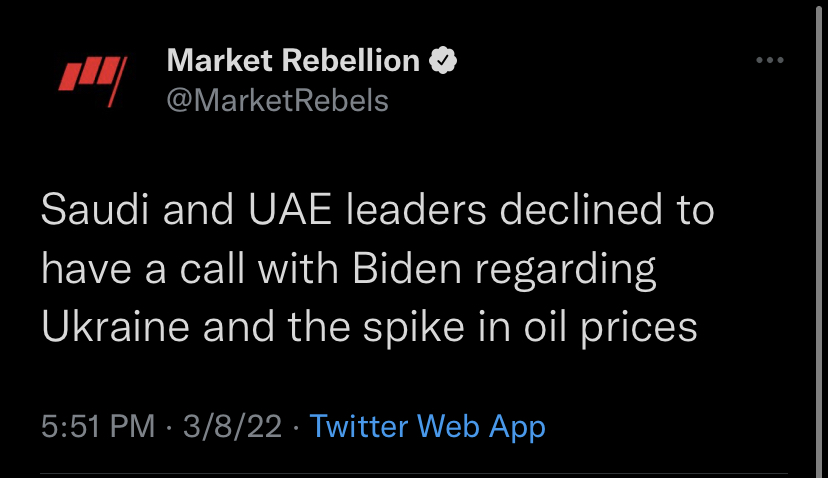 I wonder if he’s going to drunk-text the Emir tonight? 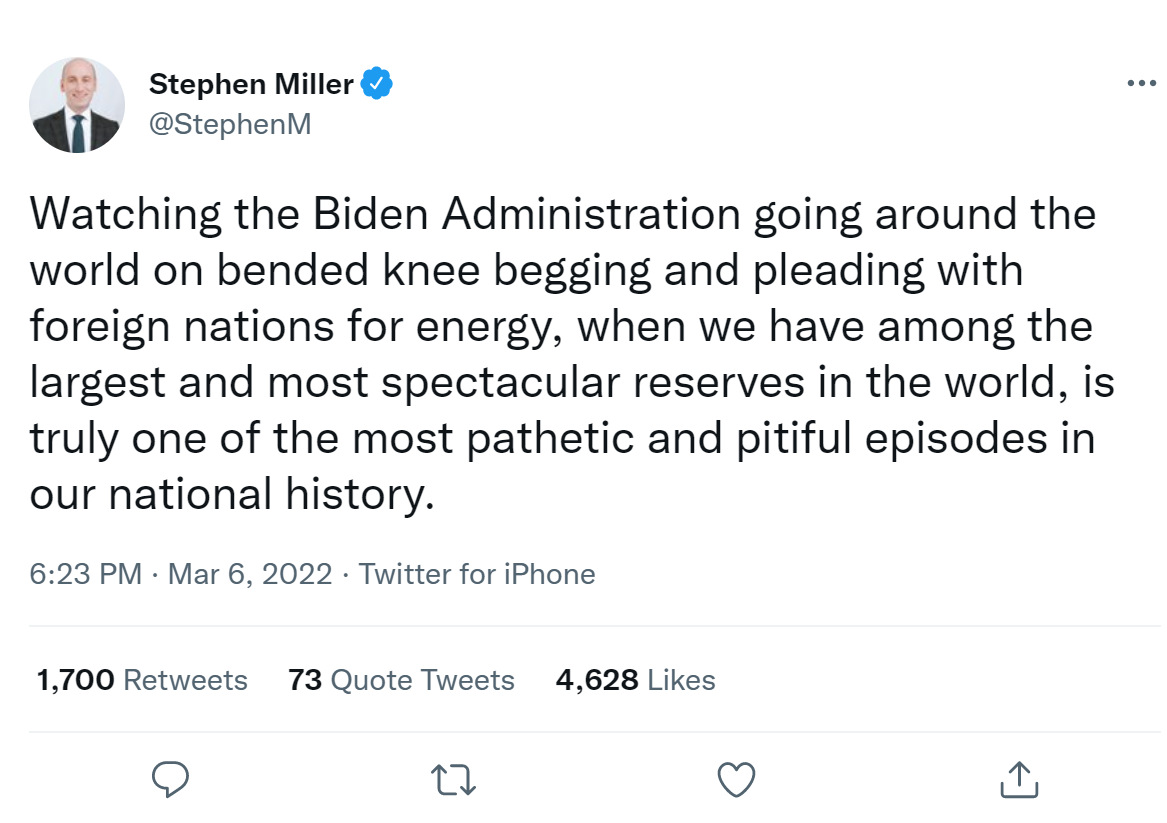 Beyond that, the price of wheat is getting ready to go even higher.  Together, Russia and Ukraine produce over 25% of the wheat exported in the world.  A quarter.  Ukraine’s planting season has been slightly impacted by current events, and Russian exports might be diverted to feed Ukraine.

The United States is certainly self-sufficient in wheat, but the prices of wheat are like oil:  they’re tied to the international price.  What happens when a loaf of bread is six dollars?  Nothing good.  But if there are price controls?  Bread will be priced at two dollars.  There just won’t be any in stores.

Domestic inflation is bad enough, but what happens when the Saudis start taking gold for oil from the Chinese?  Or start paying for Russian wheat with the gold they got from the Chinese?  The dollar, once indispensable, is done as the international currency.

That will lead to massive changes in our economy, political unrest, and, potentially, the dissolution of the United States as we know it.