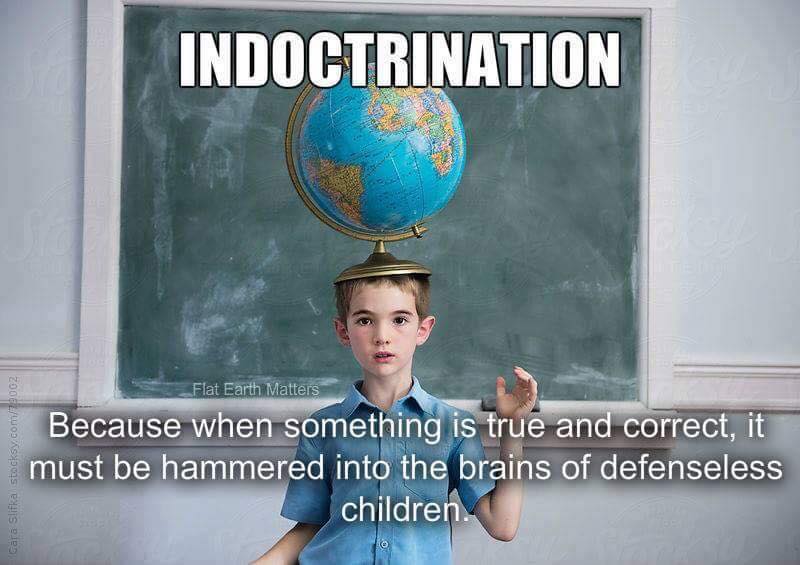 When teachers begin asking children about their parents’ political beliefs and affiliations, the problem of State interference has gone too far. And when children are encouraged to be ashamed of their parents’ beliefs, it has all too many ramifications and reminders of modern history’s political purges and darkest days.
This is not a localized issue. Indoctrination is taking place in schools all over the world. It’s happening in the UK to children of Brexiteers, it’s happening in the US to children of Christians, and it’s happening throughout the Islamic world in Madrassas, shaping young minds into weapons of hate.
The motivations of the “educators” are varied, but the one common thread is that they wish to influence the future by using children as tools, regardless the cost to the children. And this is actually even more insidious than it sounds. The teachers are taking a gamble that their own beliefs will be the dominant ideological system in the future. But they are not betting their own money, they are betting the future happiness, social acceptance, employment prospects and mental health of your children. And in the case of college professors who encourage students to violently protest, they are betting your children’s’ lives and freedom.
The amazing Peter Hitchens wrote in his Mail on Sunday Blog:
“(a) parent tells me that his daughter recently came home from primary school bearing a decorated poster with ALLAH across the middle. That parent says: ‘I have yet to see a similar poster with GOD or JESUS across it.’
His son, at a secondary school, is about to visit a mosque. So far there have been no visits to Christian churches. But it goes further than that.
At a recent parent-teacher meeting, which discussed ‘refugees’, the head teacher spoke of ‘these dark days’ since the EU referendum.
The boy has recently come home from school and – with a note of disapproval in his voice – asked his father: ‘Dad, why do you read the Daily Mail?’ It turns out that a teacher had asked the pupils how their parents had voted for in the referendum, and when one of the pupils said ‘Brexit’, this teacher had responded, in a disapproving tone, by asking: ‘Why did they vote for that?’”
The worst part of all this is that the teachers are not only being allowed to get away with this engineering, but that they are encouraged to promote the one ideological perspective. Consider that part of the UK’s £20 Billion budget per year membership of the EU is spent on EU colouring books for kindergarten children, and you’ll begin to understand the depth of indoctrination processes happening today.
Unfortunately, there is very little that can be done on a State or national level. Legislation could be introduced to curb one or more areas of teaching, but that wouldn’t change the views of those entrenched in the education system (administrators and governance included). They would still sneer at talk of “Free Speech” and “Sovereign nations” leading to a slanting of the information presented. Neither can all of the culprits be realistically fired; the sad truth is that children need at least some kind of education (and working parents require somewhere to send their children during the day).
Having taught in Chinese schools for many years, I have firsthand experience at the level of indoctrination that happens within the education system. But at least in China, they are taught to love their country and family above all else. It may appear “nationalistic” to some, but the children do love their country, and insist that China looks after China first. They are not taught to hate their roots. So although a similar indoctrination process takes place, they, at the very least, grow up with confidence in their nation and pride in their nationality.

See also  BELIEVE IT! US Dollar Collapse Will Accelerate As More People Become SLAVES To The System.
See also  Forbes: The Tripledemic Is Here, and It’s Causing a Rise in Children Being Hospitalized
Trending: Views: 33