It’s officially “stonk season” in the markets. The IPO market continues to baffle, and SPACs continue to pop-up like weeds in your front yard.

Plus if you’ve seen GameStop (GME), AMC Entertainment (AMC), and Blackberry (BB) lately, you know the Robinhooders are at it again.

These speculative gambles are ridiculously frothy right now as hedge funds and institutions continue to try and cover their shorts. The moves these stocks are making are more detached from reality than the guy in a buffalo headdress at the Capitol 3 weeks ago.

Complacency is the most significant near-term risk to stocks by far, and I have been warning about this for weeks. It also reminds me of the Q4 2018 pullback ( read my story here ).

It’s also earnings season (for those who care, like analysts), and it’s time for some big swings and volatility.

Well, not entirely. Monday (Jan. 25) saw a sudden mid-day plummet and subsequent recovery, and Tuesday (Jan. 26) traded slightly down. Wednesday (Jan. 27) looks set to open lower – we will see how that ends up.

Earnings have so far impressed, though, and there were some big moves from individual stocks.

General Electric (GE) popped over 9% thanks to a healthy outlook for 2021 and better than expected industrial free cash flow.

Johnson & Johnson (JNJ) also saw a nice 3% gain after beating earnings. Investors are also eagerly anticipating results from its vaccine’s trial. Johnson & Johnson’s vaccine is one dose and does not require any crazy storage protocols like Pfizer (PFE) and Moderna’s (MRNA). Strong results and FDA approval could genuinely change the tide of the pandemic and vaccine rollout.

Does this mean we’re all clear now and can party like it’s 1999?

Not exactly. Plus, if you’re a stock nerd like I am, you don’t want to party like it’s 1999. Because that means 2000 will come—the end of one of the biggest parties, investors have ever seen. I’m talking about the dot-com bust.

Fair warning: the S&P 500 is still at or near its most-expensive level in recent history on most measures, and the Russell 2000 has never traded this high above its 200-day moving average.

The more GameStop pops, the more of a circus I think this market is. GameStop a $15+ billion company? Really? A correction at some point in the short-term would not be shocking in the least.

John Studzinski , vice chairman of Pimco, believes that market valuations are sound and reflect expectations of this eventual reopening and economic recovery by the second half of the year.

I agree on some level about the second half of the year. Outside of complacency, though, I have other short-term concerns.

For one, trillions in imminent stimulus could be useful for stocks but bring back inflation by mid-year. The worst part about it? The Fed will likely let it run hot. With debt rising and consumer spending expected to increase as vaccines are rolled out to the masses, the Fed is undoubtedly more likely to let inflation rise than letting interest rates rise.

All of this tells me that the market remains a pay-per-view fight between good news and bad news.

We may trade sideways this quarter- that would not shock me in the least. But I think we are long overdue for a correction since we haven’t seen one since last March.

A correction could also be an excellent buying opportunity for what should be a great second half of the year.

While there is long-term optimism, there are short-term concerns. A short-term correction between now and Q1 2021 is possible. I don’t think that a decline above ~20%, leading to a bear market will happen.

My goal for these updates is to educate you, give you ideas, and help you manage money like I did when I was pressing the buy and sell buttons for $600+ million in assets. I left that career to pursue one where I could help people who needed help, instead of the ultra-high net worth. Hopefully, you find my insights enlightening, and I welcome your thoughts and questions.

We have a critical week ahead with the Fed set to have its first monetary policy meeting of 2021 and more earnings announcements. I wish you the best of luck. We’ll check back in with you at the end of the week.

Small-caps are Too Hot to Handle 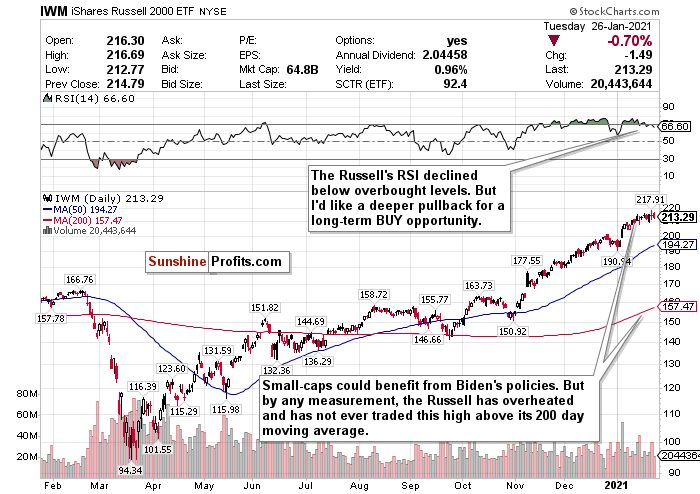 As tracked by the iShares Russell 2000 ETF (IWM) , small-cap stocks underperformed the larger indices on Tuesday (January 26). The RSI is no longer technically overbought, but I still think that the Russell has overheated in the short-term. Stocks don’t just go up in a straight line without experiencing a sharp pullback. That’s just the nature of the beast.

Nobody knows what will happen during this critical week of earnings, but I called a decline after the IWM began the week over a 70 RSI. Indeed the IWM is having a down week to this point, but it’s not sharply down enough for me to switch my call. Not even close.

I love small-cap stocks in the long-term, especially as the world reopens. Small-caps are also the most likely to benefit from Biden’s aggressive stimulus plan.

But the index has overheated. Period.

Before January 4, the RSI for the IWM Russell 2000 ETF was at a scorching hot 74.54. I called a sell-off happening in the short-term due to this RSI, and it happened.

After the RSI hit another overbought level of approximately 77 two Wednesdays ago (January 13), the IWM declined by another 1.5%. I said that Russell stocks would imminently cool down because the RSI was too hot, and precisely that’s what happened.

Consider this too. In its entire history as an index, the Russell has never traded this high above its 200-day moving average.

Small-caps may have priced in vaccine-related gains by now, and some stimulus optimism may have been priced in too.

I hope small-caps decline before jumping back in for long-term buying opportunities. I love where these stocks could end up by the end of the year.

SELL and take profits if you can- but do not fully exit positions . If there is a deeper pullback, this is a STRONG BUY for the long-term recovery.