Global manufacturing growth slowed to a five-month low in March, though remained robust by recent standards. Regional trends varied markedly, however, with faster growth in the US helping North America to close the gap with the slowing eurozone economy. Asia remained on a sluggish growth path.

Capacity constraints meanwhile led to sellers regaining pricing power, notably in the US and Europe.

The headline JPMorgan Manufacturing PMI, compiled by IHS Markit, fell for a third successive month, down from 54.1 in February to 53.4 in March. However, while the decline in the PMI so far this year has indicated slowing growth of business activity, December’s reading had been the highest for nearly seven years, and the March index remains above the average recorded in 2017, underscoring the resilient steady pace of expansion being signalled by the surveys. 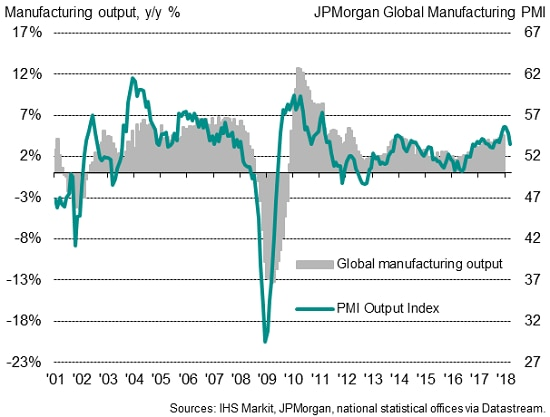 Historical comparisons with official data suggest that the latest PMI is consistent with worldwide factory output growing at an annual rate of approximately 4% (over the past two decades, the PMI has exhibited an 86% correlation with the official manufacturing output data, with the PMI acting with a four-month lead).

Moreover, of the 30 countries for which survey data were available, only three recorded PMI readings below 50, signalling contraction, and even in these cases (Thailand, South Korea and Malaysia) the deteriorations signalled were only modest. 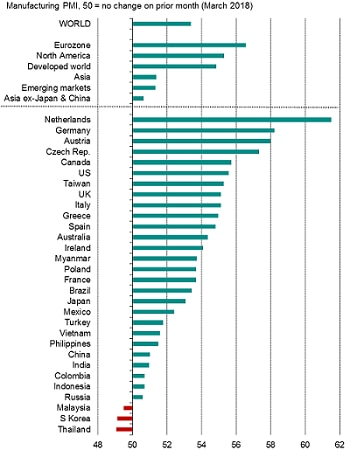 The fastest rates of expansion were again seen in the eurozone and its neighbouring countries. The Netherlands headed up the global rankings, followed by Germany and Austria.

However, with Canada and the US ranked fifth and sixth place respectively, North America is also clearly enjoying a solid manufacturing upturn. As eurozone manufacturing growth showed further signs of coming off the boil to sit at an eight-month low, growth accelerated to a three-year high in the US and remained close to recent seven-year highs in Canada.

Taiwan was again the highest-ranking Asian economy in an otherwise ongoing unexceptional performance for the region. An Asian PMI reading of 51.4 compared to 55.3 for North America and 56.6 for the eurozone, dragged down to a large extent by growth in China slipping to a four-month low. 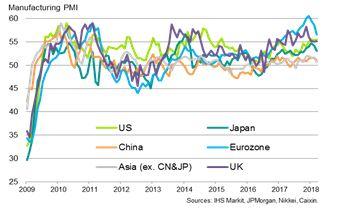 At least some of the slowdown appears to have been the result of capacity constraints, as suppliers were often reported to have struggled to cater for strong demand, notably in Europe. Global supplier delivery times lengthened to the greatest extent since May 2011, with delays close to 20-year survey records in the eurozone and at four-year high in North America.

An upshot of the delays was the ability of suppliers to hike prices, with manufacturers increasingly eager to ensure production needs were satisfied. Although global rates of input cost and factory gate price inflation both cooled slightly for a second successive month, rates hit six-and-a-half year highs in North American and remained especially elevated in the eurozone. 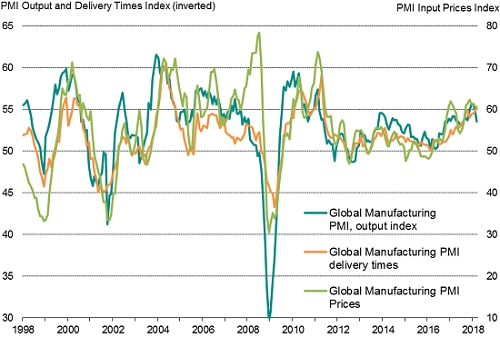 UPBEAT OUTLOOKS IN THE US AND CHINA

While the global PMI data hint at the manufacturing growth cycle having peaked at the turn of the year, forward–looking sentiment data suggest the global slowdown indicated by the headline PMI may be at least limited in scale. Companies’ own views on their output levels in a year’s time nudged up to the highest since February 2015.

In a month during which worries about trade wars and tariffs intensified, it was interesting to see expectations for the year ahead improve in both the US and China, though expectations slipped lower in the eurozone and the rest of Asia.