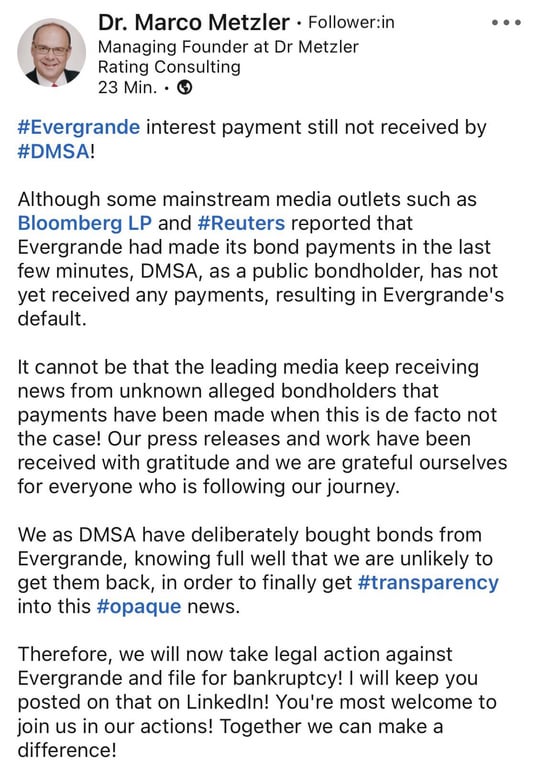 Moreover, according to Deutsche Markt Screening Agentur (DMSA), not only did they default, but DMSA is now making preparations for bankruptcy proceedings.

An independent German agency named Deutsche Markt Screening Agentur (DMSA) just dropped a bomb on Evergrande today highlighting it as officially defaulted (as of today) and now preparing bankruptcy proceedings against them.

The following was said from their press release today:

China Evergrande Group today again defaulted on interest payments to international investors. DMSA itself is invested in these bonds and has not received any interest payments until today’s end of the grace period. Now DMSA is preparing bankruptcy proceedings against Evergrande and calls on all bond investors to join it.

There is a lot to unpack here so, for organizational purposes, here is the post covers:

As for proving the censorship, you can even check for yourself. You have a TON of foreign media all reporting one thing and U.S. media reporting another. I mean, FFS, Canada is even reporting the default. We’ll see what happens the next few days too. Especially when they begin to respond to this finding.

Anyways, here is how you can see it for yourself:

The best contradiction I found was Yahoo contradicting themselves. That’s right, they literally posted contradicting articles at different times covering this where Yahoo news posted the truth and, of course, Yahoo finance posting what their corporate overlords want you to think.

Seems the two departments weren’t exactly on the same page.

Then there is U.S. Media…

Proof of Default and Bankruptcy Proceedings:

The FIVE big things to take away:

U.S. media really shocked me today and I think it’s the one piece here that needs to be addressed. Why are they lying? I understand this isn’t something new, but with Evergrande? China? It’s almost looks if they are trying to protect Evergrande. That or prevent panic from shareholders. What do you think?

Update: I found a bunch of bot-like accounts posting on Twitter MSM links as a response to Evergrande defaulting. Almost as if damage control has been put out and posting these links will somehow change things. This one bitch had the audacity of even posting

“contrary to what you may have heard ~on the internet~….”

then proceeds to posts bloomberg link on Evergrande. YA, THAT SHOULD DO IT, PROBLEM SOLVED. I guess the big thing to wait for is MSM response to DMSA’s claim. Can’t wait to see what kind of manufactured bullshit they come up with to put this one off.

The Sector is about to Collapse:

One thing most of us saw from MSM a few weeks back was that the Chinese central bank can handle Evergrande defaulting or going bankrupt–which for the record, is not wrong. On paper, just one company? No problem. What MSM did NOT address was the Evergrande will have on the sector itself, then others as a result. Evergrande defaulting today will be a massive blow to the sector only making things even harder for those similar in size and state of Evergrande. TONS of these companies have been missing payments and defaulting, not just Evergrande in the past six months. Once Evergrande goes under, those will too. Do you think the central bank of China can bail out the entire sector and other issues stemming from it? Absolutely not. Once that happens, the bank of China then defaults then spreading the poision globally, namely the USA which is already in a glass-cannon state. You can sneeze on the US economy at this point and it will crash. If the federal reserve then defaults too, the dollar tanks and every currency that is backed by it and pegged to it. So, start buying stock to soup kitchens.

I’m pretty sure we’re nearing total global collapse. I normally hate hearing that kind of shit or I think anyone saying that is crazy, but man, I can’t say I’ve seen economic problems get this bad. Two big super powers looking fragile as f*ck right now.

As for the U.S., Federal Interest rates are already next to nothing. Can’t keep printing money either with inflation at 6.2% so when the feds increase interest rates, the economy will plunder. The debt ceiling is less than 30 days away, haven’t heard a single thing yet from it either. COVID is still a problem but not nearly as bad as what regulation will be once it kicks in. You think supply lines are bad now? Ya, you just wait.

So, yea, I’m serious, I really think total collapse is close, dangerously close and I encourage anyone of you nearing retirement to pull your money from your 401k before the market tanks and swallows it. Mother nature is about to shave off bad DNA for the next 10 years.